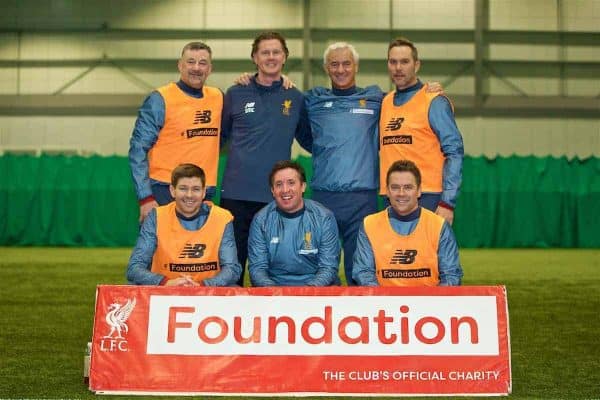 The trio all still have plenty to do with the Reds due to their jobs in the media, with McAteer working for LFCTV, and Owen and McManaman often at Anfield for BT Sport.

While some find it hard to label Owen and McManaman club legends, due to both joining Real Madrid under a cloud, their efforts at the club should never be forgotten.

All three will be turning out for the Liverpool Legends this weekend, when a team of Bayern Munich greats head to Merseyside (Saturday, 3pm kickoff), with Xabi Alonso representing both sides.

As a bit of fun, the former Reds heroes partook in the challenge displayed above, which sees them attempt to score as many volleys as possible in one minute.

With Steven Gerrard, Gary McAllister and Ian Rush all watching on, the pressure gets to McManaman, who manages to find the net just twice, with many of his efforts typically lackadaisical.

For someone who famously scored a volley in the 2000 Champions League final for Madrid against Valencia, it was a pretty poor attempt.

Owen steps up and immediately puts his former club and international team-mate to shame, levelling the scores quickly before finishing with a respectable total of four.

McAteer is last up, and in cocksure mood as ever, but he can only score three times, with some tremendous goalkeeping on show from U23s stopper Andy Firth.

It means a happy, and clearly competitive, Owen goes home the victor, although the puffing and wheezing going on suggests some fitness work is required before Saturday.

Why not attempt it with your mates!