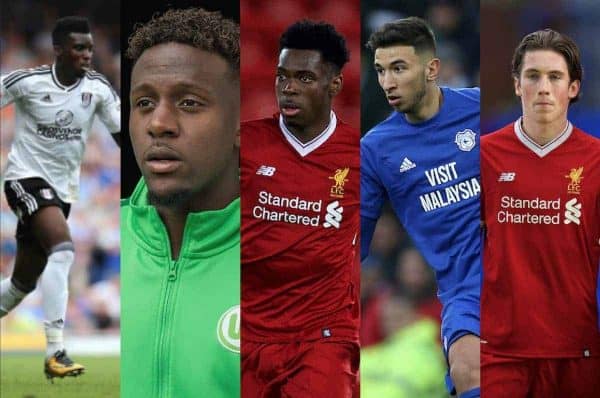 There were goals for Harry Wilson and Marko Grujic, while Naby Keita produced a top assist on a great week as 14 loanees enjoy game time.

With the ‘Best from the East’ defeated it was back to a full programme for the borrowed Reds—and they returned with a bang.

There were goals, assists, a professional debut and impressive displays as almost all those available featured, with only Lazar Markovic and Allan Rodrigues unused along with the suspended Taiwo Awoniyi.

Here’s the full lowdown on a pleasing week.

After three games sidelined Wilson was back in action in style at Hull, scoring a match-winner and posting two assists.

Wilson claimed the first of those in his comeback match, delivering a wicked cross which Abel Hernandez converted to pull one back in a 2-1 loss to Millwall.

Wilson’s impact earned a first start since returning to fitness in a dramatic 4-3 win over Norwich—and he shone with a man of the match display, grabbing another assist and scoring a stunning winner.

Wilson’s fine work paved the way for his side to go 1-0 up, as his driving run and clever reverse pass released Jackson Irvine to finish.

And after his side fought back from 3-1 down to 3-3, Wilson completed an incredible turnaround with a stunning solo effort – jinking past one defender and inside another before curling home.

It was a sensational return for Wilson and all at Hull will be delighted to have him back.

It was a memorable week for Marko Grujic…

The Serbian had a great week at Cardiff with back-to-back wins and a special moment as he scored his first senior goal in English football.

Grujic struck the winner to give Cardiff a crucial 2-1 victory over Barnsley in midweek, doubling his side’s lead with a 25-yard curling strike.

The goal-scoring display was the first of two outings for Grujic, who carried that fine form into Saturday’s 3-2 over Birmingham.

There was no goal this time but Grujic again played a key role in the win, shining as the defensive midfield shield by winning five tackles and making six interceptions.

Grujic’s spell with the Bluebirds has been a roaring success so far, with his record since joining reading seven wins and two draws from nine league games.

Another Red enjoyed a landmark moment…

Academy goalkeeper Andy Firth took his first steps in the professional game with a debut and two appearances for Chester.

It wasn’t the dream opening as Firth suffered two defeats—the first a 2-0 loss to Dover in which he could do little about either goal.

The ‘keeper then featured in what was the biggest game of his youthful career: a local derby against Wrexham which his side also lost 2-0.

Starting with the European Reds, Pedro Chirivella was the best of the rest as he produced a fine performance in WillemII’s shock 5-0 win over Eredivisie leaders PSV Eindhoven.

A virtual ever-present for the relegation-battlers, Chirivella delivered a complete, if understated, display from his play-making role, knitting his side’s game together to dominate the game.

It was a less successful time for Divock Origi who hit an all-time low at Wolfsburg, as he suffered the humiliation of being subbed before half-time.

His early departure came in a 3-0 loss to Hoffenheim despite not being injured.

Meanwhile Anderson Arroyo extended his unbeaten run with Real Mallorca B to six games as he helped keep a fourth straight clean sheet in a 3-0 win over Petra.

It was a similarly busy week for seven home-based Reds, including Jon Flanagan who had an action-packed, but difficult, time at Bolton.

The full-back played all but six minutes across two games, but made an unimpressive full debut in a 1-1 draw at Reading—with the hosts’ goal coming down Flanagan’s side after he was badly outpaced.

And it was a case of déjà vu in a draw by same the scoreline at Sheffield Wednesday, with Flanagan found out of position and outpaced again for the Owls’ opener.

Sheyi Ojo enjoyed a week of better fortunes as he featured twice for Fulham.

He made a first start since January in a 3-0 win over Sheffield United, before a late sub appearance in a 2-1 win at Preston.

But it was a tough time for Ovie Ejaria at Sunderland as he suffered back-to-back losses which left his side bottom of the Championship, but he at least enjoyed two full games.

In Scotland, Connor Randall featured in his fourth Edinburgh derby of the season but it was another to forget for the right-back as Hearts went down 2-0 to Hibernian.

In the Football League, it was a winless week for Corey Whelan, who featured in Yeovil’s 1-0 Football League Trophy semi-final first leg loss to Shrewsbury and their 2-0 defeat to Newport County.

And finally, Matty Virtue enjoyed a rare outing at Notts County as a second-half sub in a 2-1 win over Forest Green.

The soon-to-be Red continues to make Kopites dream of the impact he will make at Anfield.

Keita was man of the match as he inspired RB Leipzig to a 2-1 Europa League quarter-final first leg win over Zenit St Petersburg, claiming a top class assist for the winner.

Check out this assist from Naby Keita Liverpool fans…

Keita teed up Timo Werner to finish after effortlessly gliding past three opponents in midfield before feeding the striker a perfect through pass.

The Guinean also featured in a goalless draw with Stuttgart, and he was one of the brighter performers in a drab contest, though may feel he could have been the match-winner with some better finishing.