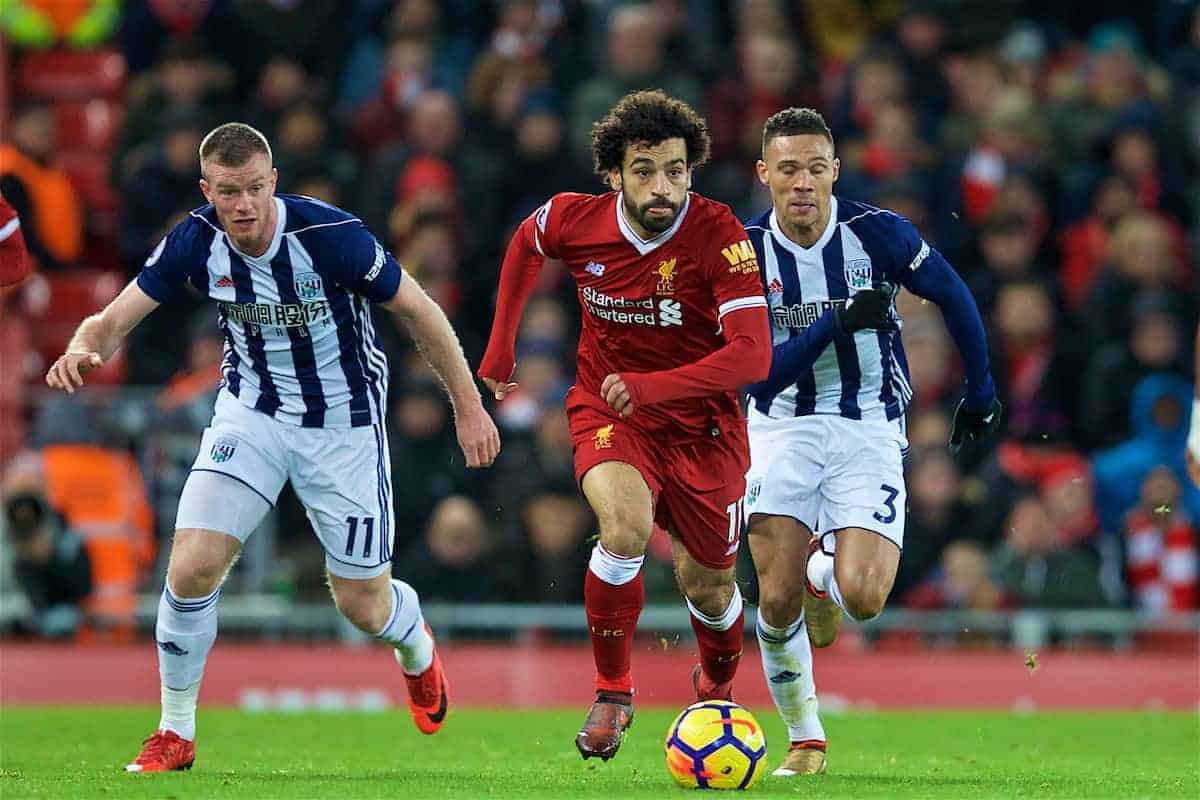 For the first time since March the Reds have been afforded more than four days without a game, which feels like a huge luxury.

A relentless run of fixtures in both the Premier League and Champions League will have taken its toll on the players, and this week-long break without a match has come at a perfect time.

Although much of the focus is now understandably on next Tuesday’s semi-final first leg at home to AS Roma, league commitments should not be downplayed.

Jurgen Klopp‘s team still have a chance of finishing second in the table, following recent dropped points by Man United, but a top-four finish is also not yet done and dusted.

This weekend, Liverpool come up against a West Brom side resigned to their return to the Championship, but buoyed by a shock win at Old Trafford last Sunday.

Darren Moore is doing an admirable job as caretaker manager, and no matter how the Baggies are faring trips to the Hawthorns are rarely easy.

Changes are expected from Klopp, but he has stated many times that he will not field hugely weakened teams if the top-four battle is still going.

Liverpool should get the three points, regardless of the alterations Klopp makes.

Liverpool are still without stricken trio Joel Matip, Emre Can and Adam Lallana, although the latter duo are hopeful of playing again this season.

Joe Gomez could return to the side after recovering from ankle ligament damage, while Dejan Lovren is also fit, having limped off in the second half of last Saturday’s 3-0 win over Bournemouth.

Ben Woodburn has a good chance of starting in midfield, and who Klopp opts for alongside him could give a few clues about his starting lineup against Roma.

Gini Wijnaldum is arguably the least likely to start at Anfield in midweek, with Jordan Henderson, James Milner and Alex Oxlade-Chamberlain the preferred trio.

The Dutchman should therefore start as well as Oxlade-Chamberlain, with the former Arsenal man’s age and fitness allowing him to play twice in the space of three days.

Danny Ings and Dominic Solanke may partner one another in attack, as was the case at Everton a fortnight ago, with at least two of Mohamed Salah, Sadio Mane and Roberto Firmino given the afternoon off.

Salah will be desperate to keep his lead on Harry Kane in the Premier League Golden Boot race—currently 30-26—but will Klopp’s sentimental side see him start the Reds’ star man against the Baggies?

West Brom will be without long-term absentee Nacer Chadli, but both Jonny Evans and Hal Robson-Kanu are fit to return.

Last 5 Away to West Brom (All Competitions) Away fans’ pubs: “The Vine in Roebuck Street, about a 20-minute walk from the Hawthorns, is widely considered the best watering hole for visiting fans,” Birmingham Mail senior sports writer Paul Suart told us.

“Away supporters are welcome at the Fan Zone opposite the ground in Halfords Lane, although a matchday ticket is needed to enter.”

One piece of advice for visiting fan: “Try to avoid parking down Halfords Lane as there can be a pretty long queue to get out after the match. There’s a few car parks along Birmingham Road before you meet the Hawthorns heading from the M5.”

Liverpool have now scored 300 goals with Klopp at the helm in just 148 games.

There have been 31 different goalscorers in that time, with Firmino topping the pile with 48, but Salah (40) is already gaining ground despite joining the club two years later.

Speaking at Melwood on Friday afternoon, Klopp insisted Liverpool must “respect West Brom,” despite the attraction of the visit of Roma:

“We always respect the intensity of the season so far, but in the end we respect West Brom,” he said.

“We respect the competition of the Premier League, we know we need points to be in the top four.

“A lot of people thought ‘oh, United lost against West Brom!’. Now they have a home game and they want to show that they believe in their little last chance, that’s how it is.” Coverage on Sky Sports Main Event gets underway at 11.30am, with kickoff at 12.30pm.

Our matchday live blog will spring into action at 11.45am, with Henry Jackson in charge of keeping you entertained before, during and a little bit after proceedings.