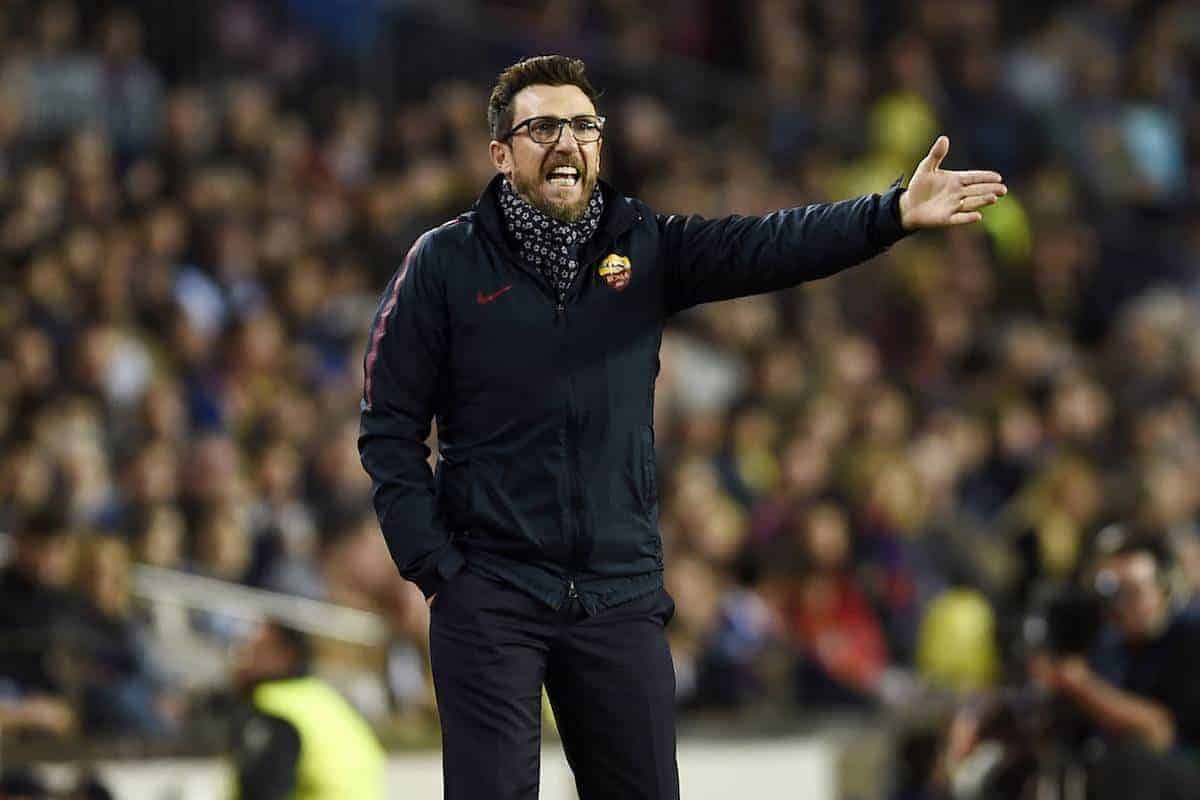 Before they head to Liverpool for Tuesday’s Champions League semi-final clash, Roma must navigate two tough clashes with Genoa and SPAL.

The Reds have benefited from a relaxed schedule ahead of the first leg at Anfield next week, having won 3-0 at home to Bournemouth last weekend and facing a trip to West Brom on Saturday.

With a place in the final of Europe’s top tier to fight for, the onus is on both Liverpool and Roma to secure a positive result in six days’ time.

But while Jurgen Klopp prepares his side to take on the Premier League‘s bottom-placed side, safe in the knowledge they are 10 points clear of Chelsea, Roma manager Eusebio Di Francesco has two pivotal games to contend with.

First, Roma take on Genoa at Stadio Olimpico on Wednesday night, and after Sunday’s 0-0 draw with city rivals Lazio victory over the mid-table outfit is imperative.

Then I Giallorossi travel to Ferrara on Saturday for a meeting with SPAL who, mired in a relegation battle with the likes of Crotone and Verona, will be fighting for the three points.

With three games in just seven days, and a top-four finish not yet secured in Serie A, Di Francesco has a delicate balancing act to play.

Speaking at his pre-match press conference on Tuesday, the 48-year-old stressed that “we need to keep our focus on Genoa,” but also conceded he would “make some changes” to introduce “fresh legs.”

Di Francesco suggested Maxime Gonalons, Cengiz Under, Stephan El Shaarawy and Edin Dzeko would all start, but ruled out Diego Perotti and confirmed doubts over Kostas Manolas and Alessandro Florenzi.

The absence of Manolas would likely see Juan Jesus brought in, and if the Greek faces a longer layoff this could be a major boost to Liverpool. Meanwhile, Klopp was lifted by the return of Joe Gomez to full training on Tuesday afternoon, providing the manager with another option at both right-back and centre-back.

He may be required, as both Dejan Lovren and Nathaniel Clyne weren’t pictured at Melwood, with the former limping out of the win over Bournemouth and the latter not involved due to injury.

Klopp is likely to make changes to his side at the Hawthorns, much as he did away to Everton ahead of the decisive quarter-final second leg at Man City.

The likes of Alberto Moreno, Ragnar Klavan, Danny Ings and Dominic Solanke could be considered, as Klopp bids for a sixth European Cup in the club’s history.