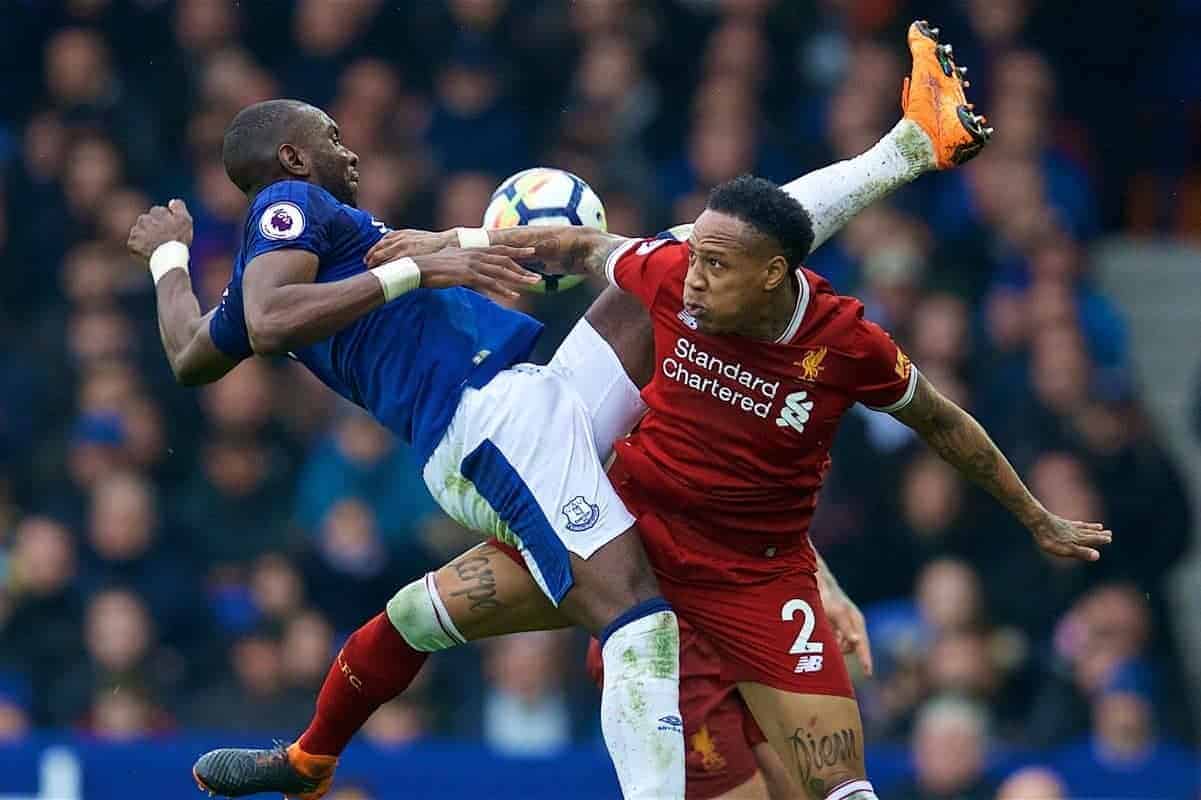 Liverpool and Everton played out a decidedly dull 0-0 Merseyside derby at Goodison Park on Saturday, with midweek endeavours taking their toll.

After the triumph of their 3-0 victory over Man City in the first leg of their Champions League quarter-final on Wednesday night, the Reds’ focus turned back to the Premier League.

This came, no less, with a trip across Stanley Park to take on Merseyside rivals Everton, who headed into the weekend ninth in the table and a sizeable 26 points behind Jurgen Klopp‘s side.

Liverpool headed to Goodison Park having won their last three games, while the Blues suffered defeat to City last time out, but with Klopp dealing with a host of injuries, the result was not cut and dried.

Despite the return leg at the Etihad to come on Tuesday night, Klopp still named a strong side, but not enough to make their mark. Under torrential rain in Liverpool, the two sides played out a loose, frenetic opening 10 minutes, with Everton looking to test their visitors with a high-intensity approach.

The return of Nathaniel Clyne at right-back gave the Reds a useful outlet, and the England international almost laid on a goal for Dominic Solanke, who saw his close-range effort denied by a phenomenal save from Jordan Pickford.

Yannick Bolasie took his chance to test Loris Karius on 22 minutes, and Pickford’s opposite number responded with a similarly impressive stop on the stretch.

It proved to be a first half for goalkeepers as Everton‘s No. 1, with Gareth Southgate watching on, thwarted a James Milner effort destined for the far corner.

This was the closest either side came in a disjointed first half that bore the hallmarks of a makeshift Reds side playing just three days after an all-out display against City. Liverpool kicked off the second half with renewed vigour, spending much of the first 10 minutes camped outside Everton‘s penalty area, seeking an opening.

There was little of genuine note before the hour mark, however, bar a bizarre flare-up from Seamus Coleman following an innocuous challenge from the bright Danny Ings on the right.

An increasingly stagnant game prompted Klopp to introduce Alex Oxlade-Chamberlain, with the midfielder coming on to replace Milner, with the veteran already having played 90 minutes on Wednesday.

Roberto Firmino soon followed, taking over from Sadio Mane after the Senegalese’s long night at Anfield in midweek, and Liverpool’s No. 9 stationed himself on the left.

Everton came closest to breaking the deadlock, but striker Cenk Tosun was unable to hit the target with a late header in the six-yard box, ensuring a drab 0-0 draw.