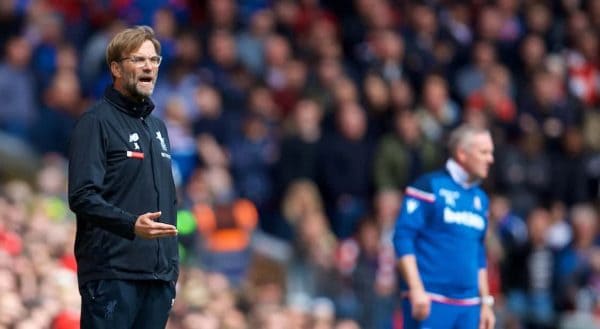 Liverpool manager Jurgen Klopp admits he has had worse days than the goalless draw at home to Stoke but felt his side were unlucky not to get the benefit of some refereeing decisions.

After Mohamed Salah uncharacteristically missed a sixth-minute one-on-one which he usually buries, Trent Alexander-Arnold was denied by Jack Butland and Danny Ings had a goal ruled out for offside, the Reds toiled against resilient relegation-threatened opposition.

Salah was well man-marked by Erik Pieters for the duration but Klopp was unhappy with some of the challenges which left Jordan Henderson nursing an ankle problem and Alexander-Arnold and Joe Gomez also sustaining minor niggles.

Towards the end, Salah was seen to be limping slightly but he confirmed to Press Association Sport after the game he was fine, while Klopp also felt his side should have had a penalty when Georginio Wijnaldum’s cross late on hit the arm of Pieters.

“We obviously met Stoke in the moment when they think a point could be enough, otherwise they have to play different,” said the Liverpool boss.

“They think they can win their next two games and have a chance with that then we can’t change their opinion.

“We had two opportunities to take the lead and we scored the offside goal.

“Handball? Yes, probably. At the end we didn’t score. That’s not the best day of my life but I had for sure worse days.”

On the close attention Salah received, Klopp added: “Mo is the most attacked player probably in the Premier League but he deals with that.

“I am not responsible for judging the rules, that is the ref and if he thinks that is OK and sets that level I cannot change it.

With just two games remaining, Stoke are running out of time to escape the bottom three and their approach at Anfield—where they have not won a top-flight match in 55 attempts—did not look like they were going down with a fight.

However, manager Paul Lambert was happy to take the point.

“We came here and played a fantastic game against a team with one foot in the Champions League final and has been scoring for fun, with one of the best players in Europe at the moment scoring for fun,” said the Scot, who has not lost at Anfield in six visits as a manager.

“We have handled everything that was thrown at us and might have sneaked it. The performance of the team as outstanding. We couldn’t have asked for anything more.

“It makes the last couple of games really interesting and I’ll take that.”

“They are going to ask for that at the Kop end but if that was given, I may as well have walked away. It was never a penalty,” he added.

Lambert also praised defender Pieters, who coped superbly with the threat of Salah.

He said: “That was the best Erik has played under me. I thought he was outstanding. It was a big challenge for him against Salah and I thought, manfully, he stood up.”