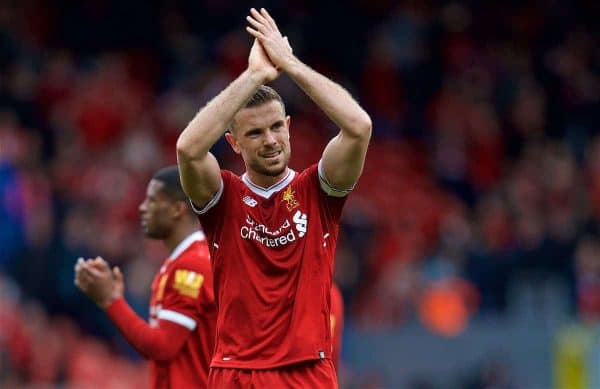 The Liverpool squad were left “frustrated” after their 0-0 draw with Stoke City on Saturday, but will now shift their focus to taking on AS Roma.

The Reds endured a familiar afternoon as they followed up their remarkable 5-2 victory in their Champions League semi-final first leg at Anfield with a drab stalemate in the Premier League.

Mohamed Salah had a fine opportunity to put Jurgen Klopp‘s side ahead within five minutes against the Potters, but his skewed effort was the closest they came.

A stubborn Stoke side fought hard for a share of the points which, given Chelsea won away to Swansea City hours later, serves as a blow to Liverpool’s top-four hopes.

Jordan Henderson, whose stunning pass saw Salah through for his one-on-one opportunity, spoke to LiverpoolFC.com, rueing the inability to convert chances along with a clear handball in the penalty area waved away:

“I thought the lads were brilliant again and just couldn’t get over the line. We felt good going into the game.

“You’ve got to give credit to Stoke—they defended really well. We knew they would, they’re fighting to stay in the Premier League so they’re chucking bodies everywhere and trying to block things.

“But we created enough open chances to score and we should have been given a penalty towards the end with the handball. When you don’t get decisions like that it’s just not your day.”

Meanwhile, Virgil van Dijk echoed that, while the application was there, the Reds were not at their best in decisive situations:

“Everyone gave 100 percent; sometimes it doesn’t go well, that happens.

“It was a frustrating game. We had good opportunities and most of the possession.

“We’re disappointed but we need to move on—there are a big couple of days ahead and we need to recover well.”

The Dutchman’s call for a renewed focus was also reflected in Loris Karius‘ analysis, with the goalkeeper shifting his attention towards another victory over Roma at Stadio Olimpico, speaking to the club’s official website:

“When we play at home, we want to get three points of course. We knew it wouldn’t be easy against Stoke and we’d have to be patient.

“The game wasn’t really going our way. It is how it is; we take the point and we’re still in a very good position.

“We still have two games and it’s all in our hands, so we shouldn’t get too frustrated. Now we move on—we have very big games ahead.”

Karius also added that Liverpool “know it’s far from over” in Italy, with Henderson taking a similar stance saying “we’ve got to be ready and I’m sure we will be.”

For Van Dijk, the opportunity to turn out in games of such magnitude is vindicating the decision to leave Southampton for Merseyside in January.

“These are the big games and a time that you want to be a part of with the squad and Liverpool. I’m enjoying every bit of it,” he added.

Given the drab nature of Saturday’s draw it comes as little surprise that the Liverpool squad refrained from overexposure on social media after the game.

But with Henderson, Ragnar Klavan and Danny Ings all providing their appraisals on Instagram, the message was clear: “We keep on going.”

Thank you for your support! Not a result we’re hoping, but we keep on going. ???

Frustrating not to get the 3 points today. But we keep going! ?? #YNWA

Frustrating not to get the 3 points! Big few days leading into wed! ??? #YNWA

Klopp made five changes to his starting lineup for this stalemate, and he is likely to restore Dejan Lovren, Andrew Robertson, James Milner and Roberto Firmino to his side on Wednesday.

This immediately gives the Reds an added edge for their European quest, but the manager will be encouraged to see the likes of Henderson, Van Dijk and Karius adopting the right attitude as they look to put a poor performance behind them.

This is paramount, as after the brilliance of their first-leg win a place in the final in Kiev next month should be considered Liverpool’s to lose.