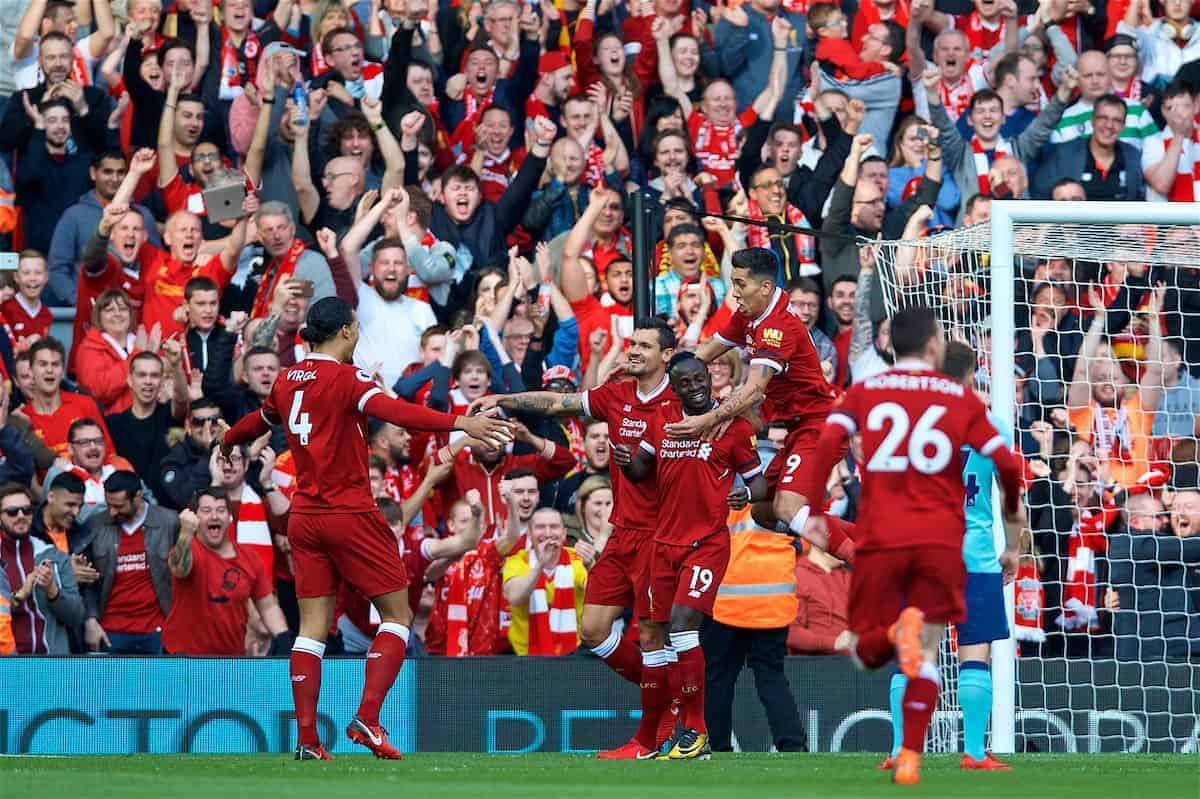 Liverpool cruised to a 3-0 win over Bournemouth with a dominant performance at Anfield to move one step closer to a top-four finish.

Returning to Anfield in buoyant mood and brimming with confidence, the Reds hosted the Cherries looking for another important three points in the top-four race.

And a fantastic display at both ends and goals from the lethal trio ensured the rewards arrived, with Liverpool easing to victory against Eddie Howe’s side.

Ahead of kickoff there was a minute’s applause as Anfield paused to mark the 29th anniversary—which comes on Sunday—and pay respects to the 96 victims of the Hillsborough disaster. A special “96” mosaic was also displayed on the Kop as Anfield remembered after a heartfelt rendition of You’ll Never Walk Alone.

The Reds were brimming with confidence were ahead on seven minutes, Sadio Mane converting on the rebound for his 10th Premier League goal of the season to become the record Senegalese scorer in history. There was no sign of a European hangover as Klopp’s side dominated, with Trent Alexander-Arnold particularly impressive as a marauding outlet from right-back. Virgil van Dijk oozed class and control at the back and all that was missing from a fine performance was a second goal. The moment finally arrived and it was a magic one for the majestic Mohamed Salah.

From an excellent Alexander-Arnold cross, the Egyptian King produced a superb header to become just the third player in Anfield history to score 40 goals in a season, joining legendary duo Roger Hunt and Ian Rush.

Roberto Firmino got in on the act in the final minute, giving Asmir Begovic the eyes and firing in a clever finish to complete the scoring and join his partners-in-crime on the scoresheet. The feel-good factor was in full flow at Anfield as a fantastic season rolls on. It was a great three points and one that leaves Klopp’s men on the cusp of a top-four spot, with a 10-point gap on fifth-placed Chelsea with four games to go.

After a hectic period the Reds now enjoy a full week to reflect, recover and prepare for the trip to all-but-relegated West Brom next Sunday.