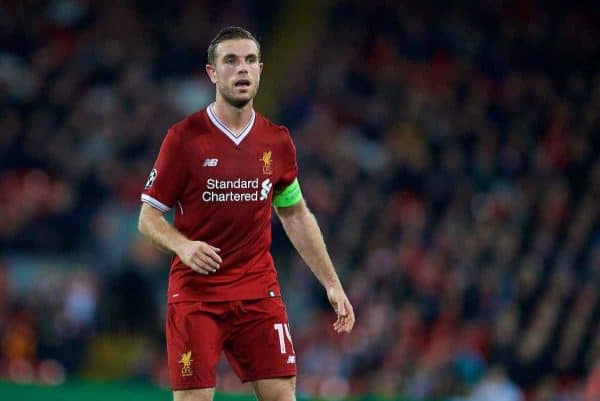 Jordan Henderson had mixed feelings after Tuesday’s 5-2 win over Roma, with Liverpool conceding twice after having led by five goals at Anfield.

The skipper felt his team were incredible going forward in the Champions League semi-final and knows the same will be required again in the second leg next week.

Goals were again shared around the front line as Mohamed Salah and Roberto Firmino netted twice apiece, with Sadio Mane scoring between each of those braces.

And Henderson lauded the off-the-ball movement shown by the front three.

“I thought some of the runs and some of the balls in behind were brilliant; probably we’re disappointed not to score more to be honest!” he told BT Sport.

“We need to be at our best but I fancy us to go there and score with the forward players we’ve got.”

Later in the match though, the Reds allowed Roma back into the tie by conceding twice late on, a strike from Edin Dzeko and a penalty dispatched by Diego Perotti, much to the annoyance of the Liverpool captain.

“We basically gave them two goals, which you cannot do in the Champions League,” he added.

“But at the same time we’ve played well, won the game, we go there with a three-goal advantage.

“It’ll be a really tough challenge for us but we’ll be confident after the performance, put a solid display on and hopefully get us to the final.”

Henderson will lead the Reds out at the Olimpico next Wednesday knowing they’ll have to be solid at the back and wait for their chances to attack—but the final in Kyiv is most certainly within touching distance.