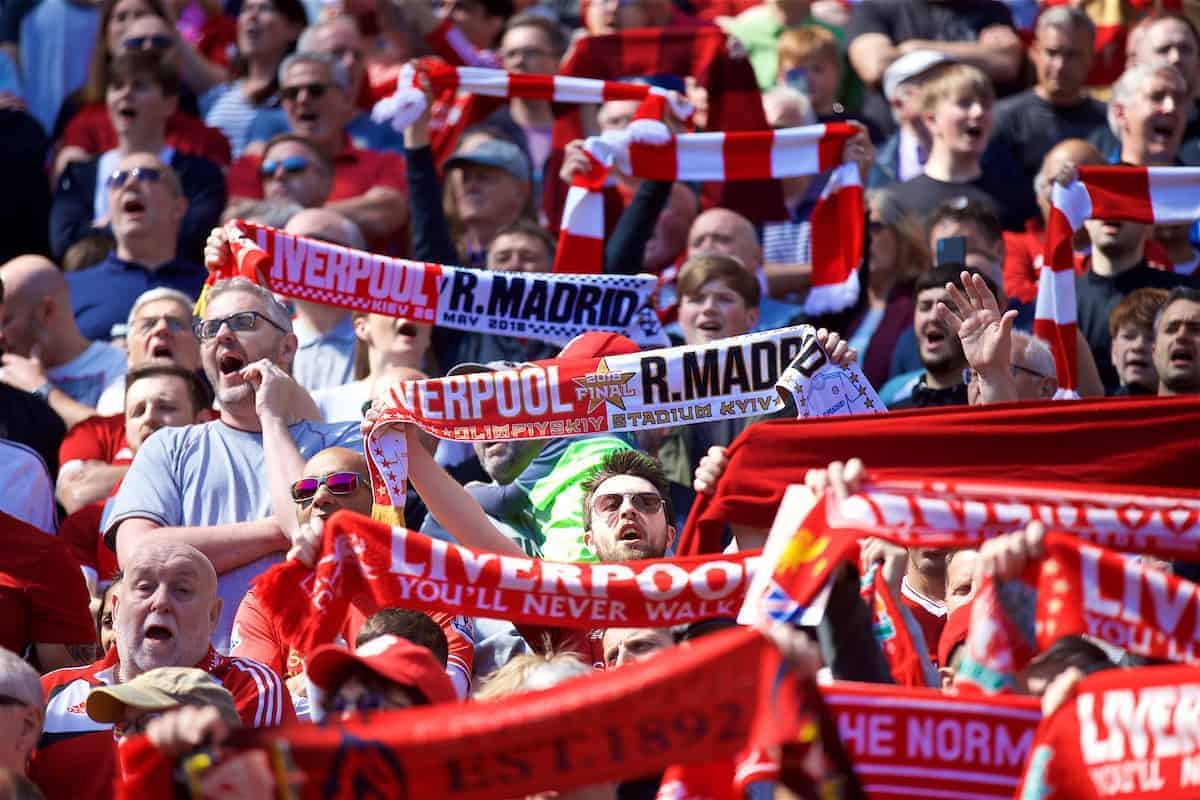 Hundreds of Liverpool supporters planning to fly to Kyiv for the Champions League final have been left stranded after a series of cancellations.

The Reds take on Real Madrid on Saturday night in their biggest game since 2007, but the buildup to the European showcase has been plagued with criticism over its organisation.

Prices for both flights and accommodation skyrocketed following Liverpool’s 7-6 aggregate win over Roma in the semi-finals, with some hotels charging over £10,000 a night.

Thursday saw the confirmation that Real Madrid had returned 1,000 tickets from their allocation due to their own supporters’ concerns over attendance.

And while UEFA were understandably unable to make these available to Liverpool due to “security reasons,” the Reds have now been rocked by another shambolic development.

World Choice Sports, a company who organise tickets and packages for worldwide sporting events, released a statement on Thursday afternoon confirming they had cancelled six flights to Kyiv:

With deep regret, we have had to cancel three flights to Kiev. Due to so many flights going into Kiev, Kiev Borispyl has unable to allocate times for aircraft.

We have exhausted all avenues to try and get landing slots. We have had them from Liverpool airport and Manchester airport and we have applied for slots in the correct manner and time frame with the authorities. To reiterate this problem IS with Kiev.

It is clear that a refund is scant compensation for such a late cancellation, with supporters taking to Twitter to express their disappointment:

Beyond a joke. When you should be looking forward to a trip and game of a life time. Nothing but stress. can’t think straight. @worldchoicespo @PeterMooreLFC @UEFAcom #lfc pic.twitter.com/D9bAFqQ3va

@worldchoicespo have just cancelled 3 flights to Kiev and in turn made 500+ people miss the final. Absolutely incredible how this can happen. #lfc @TonyBarrett pic.twitter.com/WR701QLUNV

My 18 year old son's flight to Kiev just been cancelled by World Choice Sports. He is devastated. Anyone got a seat on a private plane?! @LFC @TonyBarrett @PeterMooreLFC @JHenderson @Carra23

Flights cancelled from North West to Kiev just hours before planned departure. Shocking from @worldchoicespo leaving hundreds of Liverpool fans unable to get to the #ChampionsLeague final after shelling out thousands. #liverpool #kiev pic.twitter.com/DQVQIMHnvP

The decision to host the Champions League final in a city clearly unprepared to cope with the demand of thousands of supporters is growing more alarming by the day.

With kickoff just over 48 hours away, cancelling flights to Ukraine is remarkable, though it is worth noting World Choice Sports have placed the blame at the feet of officials in Kyiv.

The club released their own statement shortly after vowing to endeavour for a solution “until all avenues have been exhausted”:

“Liverpool Football Club are continuing to work with all of the relevant stakeholders in the UK and Ukraine in an attempt to resolve a situation which has left around 1,000 fans without flights to Kiev for the Champions League final.

“Flights chartered by World Choice Sports had been set to take supporters to Ukraine, but a dispute between the Widnes-based travel company and the aviation authorities in Kiev over the size of the aircraft has led to the trips being cancelled.

“Along with officials from Liverpool John Lennon Airport, Liverpool City Council, UEFA and the authorities in Kiev, Liverpool FC have been endeavouring to resolve the issue since it first came to light and will continue to do so until all avenues have been exhausted.”

The Champions League final kicks off at 7.45pm (BST) on Saturday night, with Jurgen Klopp‘s 24-man squad flying out to Kyiv on Thursday afternoon.