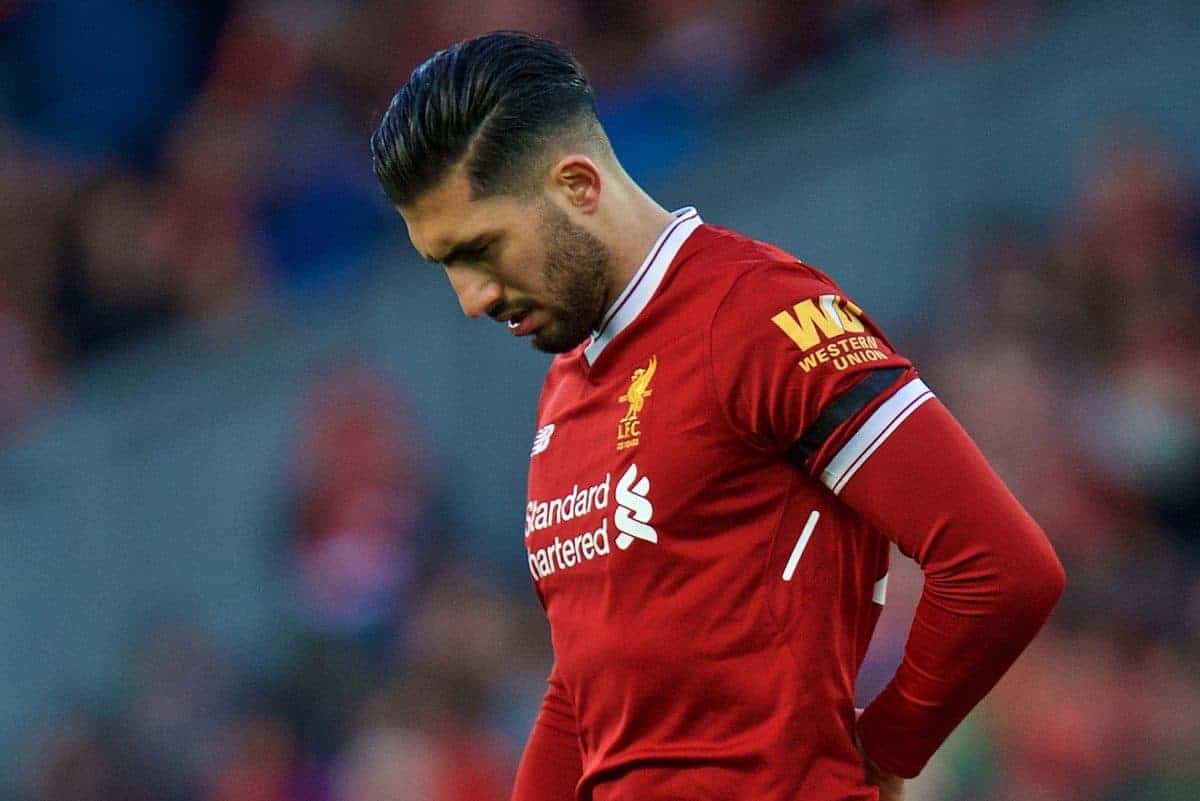 Liverpool midfielder Emre Can is unlikely to return to fitness in time for the Champions League final, and could have played his last game for the club.

Can has been sidelined since the 5-0 win over Watford on March 17, missing the last 10 games with a back injury that also saw him sent back early from Germany duty.

The 24-year-old has subsequently sat out of Liverpool’s charge to Kiev, with Jurgen Klopp‘s midfield options diminishing further after Alex Oxlade-Chamberlain‘s withdrawal against Roma.

Oxlade-Chamberlain is set to miss the rest of the season with a knee injury, and Can is now likely to join him on the absentee list against Real Madrid.

A variety of sources including the Telegraph, the Liverpool Echo and the Times report that he is yet to return to training.

Can underwent a scan on his back on Monday, but this “proved inconclusive,” with further tests planned as Klopp bids to welcome him back to Melwood next week.

Interestingly, the midfielder has spent the majority of his rehabilitation in his native Frankfurt rather than on Merseyside.

This only further fuels speculation over his future, with just under two months remaining on his current contract and a move to Juventus growing increasingly likely. If Can does depart as expected, this would be a disappointing end to an excellent spell with the club, and certainly a bemusing one given he will watch on as Liverpool play their biggest game since 2007.

The Telegraph‘s Chris Bascombe speculates that the Reds “will have to alter their transfer plans accordingly” if Can moves on, with Klopp “pursuing more midfield reinforcements.”

Wolves‘ Ruben Neves and Napoli’s Jorginho are both on the Reds’ radar for the No. 6 role, while Leicester City‘s Wilfred Ndidi was mooted as a possible signing earlier this year.

That Klopp is seemingly targeting another deep-lying option further indicates that Can is likely to leave, with the German his current alternative to Jordan Henderson.

The arrival of Naby Keita in July will bolster his more progressive options, joining Oxlade-Chamberlain, Georginio Wijnaldum and Adam Lallana, while Lyon’s Nabil Fekir could add to that group.

Ideally, Can would commit his long-term future to Liverpool in a late U-turn, given the standard of his performances since joining from Bayer Leverkusen in 2014.