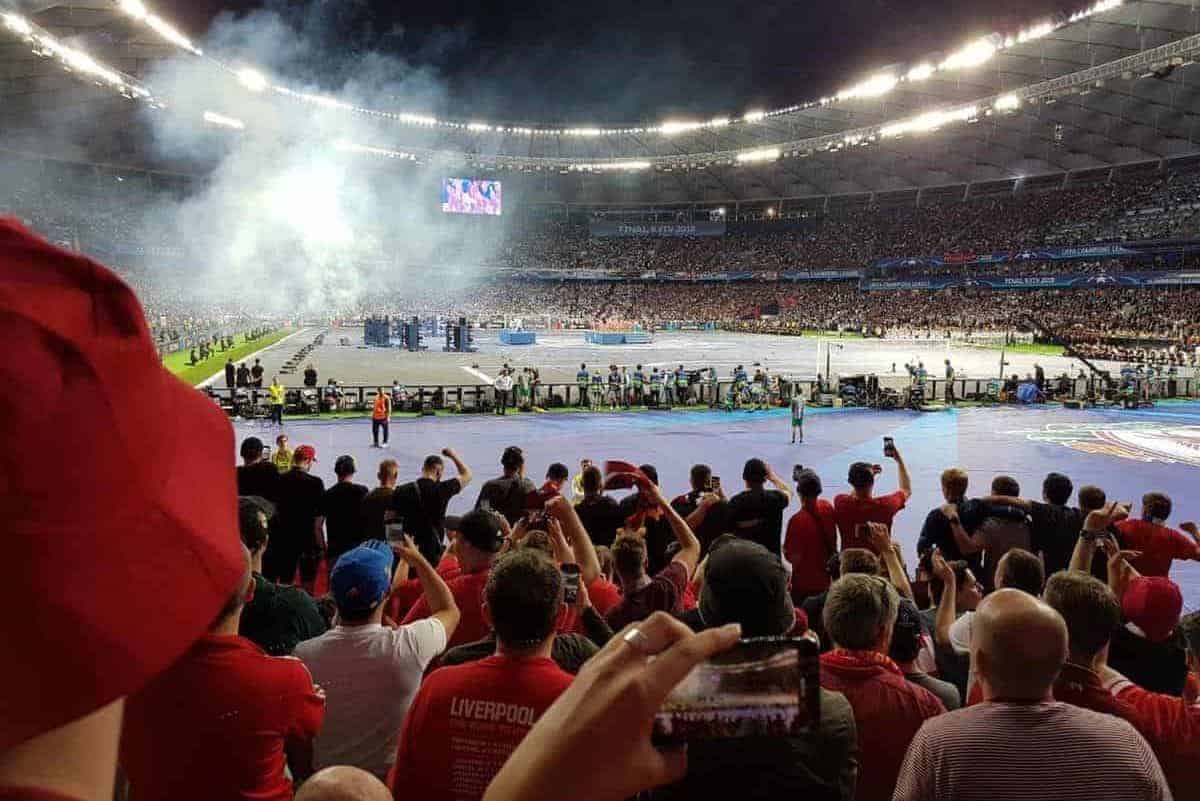 Though it ended in disappointment and another setback, Liverpool fans can look back fondly on their in Kyiv for the Champions League final.

I wake up. Startled and slightly dazed. Sweating and heart racing. I reach out to check the time on my phone on the table next to me. 5.40am. Then it dawns on me. Champions League final day. The day had finally arrived.

I hadn’t planned to get up so early and I needed to sleep more. In truth, it had been this way for the past couple of weeks. The anticipation, the nerves, the restless sleep. I had even gone to the lengths of purchasing new blinds from Ikea, convinced that the bright early mornings were the cause of my restless nights and general haziness.

I was lying to myself. This was about only one thing. Pure Champions League final fever. The European Cup final. A third for me personally. An eighth for Liverpool Football Club. A second for the manager and a first for all of the players. I can only imagine how they must be feeling right now.

The ecstasy of the semi-final win against Roma. The utter chaos of arranging travel and accommodation in a far flung, and not particularly accessible, eastern-European city. The mad rush to secure a precious and all-too-limited ticket for the final.

All was now in the past. Today was the day we had been waiting for. I had taken the small risk of booking my flights and accommodation in Kyiv after the first leg of the semi, confident enough that the Reds would get the job done.

I am currently living and working in Hamburg, Germany, so was luckily able to avoid the outrageous prices many were forced to shell out for to travel from Liverpool and the UK.

Accommodation was the handily located Veskela Hostel, just around the corner from the LFC fan park in Shevchenko Park. That had been booked on our behalf by a local, who my mate Chris happened to know. A life saver.

Few others were so lucky, and we actually offered out a spare bed in our dorm to any needy Reds on Twitter.

Great how connections are made and people come together to help each other out around football. There are three of us travelling together from Hamburg. Phil, Chris and myself. Our flight, direct to Kyiv Zhuliany International Airport, was departing on the afternoon of the game. All being well, still enough time to soak up some of the pre-match atmosphere with kickoff at 9.45pm local time.

The day starts with a hearty breakfast and a couple of beers before we headed to the airport. A couple more beers in the departures lounge surrounded by fellow Reds who had flown over to Hamburg to connect on to our flight to Kyiv, and we are getting in the mood.

We even meet and shake hands with a genuine European Cup winner in the airport.

A couple of friendly German guys come over to wish us luck, and as the conversation unfolds, one turns out to be the former Hamburg SV team-mate of Kevin Keegan and 1983 European Cup winner, Holger Hieronymus (we have to Google him too!). Surely a good omen for the night ahead.

Next it’s to gate No. 18 to board the flight, and the songs are already starting. Then the whispers start to filter through, and the news we all hadn’t wanted to hear is confirmed.

Initially one hour. We still have time but cannot afford to lose too much more.

I hadn’t wanted to take the risk of posting our tickets out to Germany, so I am due to collect them pre-match from a mate who is already in Kyiv. This delay is far from ideal, but we won’t be shaken. No one wins a European Cup the easy way, without adversity.

We eventually take off over one-and-a-half hours after the scheduled departure time. Maybe it would have been wiser to have travelled the day before after all!

Another couple of beers and a sing-song on the plane (to the bemusement of the non-football fans and cabin crew amongst us!) and spirts are high again. We won’t have much time to spare once we land in Kyiv, but we already have transport arranged from the airport (the man Boris), and my mate with the tickets has passed them on to another mate, who would meet us close to the fan park. Great how people come together to help each other out around football. Kyiv is nice city. We were staying until Monday morning and were able to get a feel for the city beyond the Olimpiyskiy Stadium and the fan park.

The locals were generally friendly and inviting, despite reports of one or two isolated incidents, and they seemed to embrace the event. Plus the low cost of beer, food and transport was a minor relief after the cost of getting there.

There is no time for that now, though. We have tickets to collect and a European Cup final just a couple of hours away.

Tickets in hand and a swift dash across the city and we catch our first glimpse of it. The Olimpiyskiy Stadium. Giant Liverpool and Real Madrid crests adorned on its exterior.

The atmosphere is absolutely bouncing as we approach towards the north end, where the Liverpool fans will be situated. There is a festival vibe. The weather is perfect, and everyone is in the mood for this.

Photos taken, and security negotiated, the team news begins filtering through. No surprises from a Liverpool perspective. It’s the only XI it realistically could have been. Bale is on the bench for Real. Casemiro in midfield. I had become increasingly confident of our chances as the days passed by and we got closer to the big day. I am now convinced that the pure force of positivity and feel-good factor surrounding the manager, the players and the whole supporter base simply has to carry us to victory. There was no other way.

This sense only intensifies when I step into the ground and find my seat in row 10 of the lower tier, just to the left of the goal. The colour. The noise. The party vibe. It was a sight to behold. An attack of the senses.

I can only imagine how the players, in the midst of their pre-match warm-up, are feeling on taking it all in. They must feel 10′ tall. We are all with them and all as one.

We slightly outnumbered the Madrid fans in the ground, but in terms of noise and colour there is a huge chasm between the two ends of the stadium. I have experienced a few atmospheres over the years, but this is amongst the best. No question. The party doesn’t stop for Dua Lipa either. These UEFA-orchestrated pre-match ceremonies tend to feel at best unnecessary and something of a nuance.

But most of the Liverpool end actually decide to go with it and embrace the moment. After all, there is little chance of out-singing the stadium sound system anyway.

Kickoff. The heart flutters briefly. This is it. The Reds start well. We are asking questions of Madrid, as well as containing them relatively well. Lovren looks up for this. Mane looks lively. Firmino has a chance and Trent tests Navas.

We look like we can hurt them. Although Ronaldo provides a reminder of the threat they pose as he blazes narrowly over from an angle.

Then comes one of the key moments on which the game turns. To be honest, I don’t see what happens from where I am stood, low down at the opposite end of the ground. However, the physios are on and Salah is clearly struggling. He attempts to continue but it is not going to happen.

The fourth officials’ board displays the No. 11. Salah’s night is at a premature end and Lallana in on. Gutting. Ramos knew what he was doing, and he will get away with it. Again.

Half-time. The mood in the stands is surprisingly sombre at the break, despite the score remaining goalless. The loss of Salah hit hard, and we were hanging on towards the end of the half. Real were turning up the heat.

Nonetheless, the atmosphere is up again as the players reappear for the second half. We have to convey some energy to them. This is still there to be won. Madrid do not look infallible.

Second half. What just happened? The ball is in the back of the net and Benzema is away celebrating.

I am far away from the action again, but this is bizarre. Surely there must have been an offside, a foul, something!

The replays on the big screen confirm the worst. A horror show from Karius and on the biggest of stages. 1-0 Madrid.

We can’t lose like this. Surely? Cue Sadio Mane. The liveliest player on the pitch in red. The one most likely for Liverpool now that Salah can no longer influence this.

I have been stood on my seat for the whole game up until this point, as has everyone around me. The ball barely touches the back of the net before I am sent head first into the row behind. The celebrations wild. Pure elation. The bruises still felt the next day. 1-1.

Back on level terms, Isco’s shot somehow loops onto the crossbar and not into the net. Is destiny with us once again?

Enter Gareth Bale. The true difference maker on the night. The starkest example of the difference between the relative strengths of the two benches.

His first goal is world class. Worthy of this stage. The second is all about Karius, again. You have to feel for him. Can he recover from this? Should he be given the chance to do so?

Mane hits a post and there should be a penalty for handball at 1-2. It is right in front of me. Blatant. The refereeing is generally poor, but Real are also much better at influencing and refereeing the game themselves. We need to get better at those ‘dark arts’.

As the minutes tick down and defeat becomes evermore inevitable, we rouse ourselves to sing again. To show the players and the manager appreciation for what they have achieved in reaching an unlikely final and giving us days like these and memories to cherish.

Final whistle. 3-1 Real Madrid. Dejection. It wasn’t to be.

In truth, we probably didn’t show enough on the night, regardless of the obvious goalkeeping horror show. Despite some honourable individual performances, we failed to show the best face of this Liverpool.

But we will strengthen, and under Jurgen Klopp we will come back stronger for this.

I stay to applaud each and every player, and just long enough to see them preparing to present the trophy to Ramos. Then I can’t take any more. I am on my way out into the warm Kyiv evening air.

No. 6 will have to wait. But the journey, the memories, the experience and the atmosphere are all just as much a part of this. And they cannot be taken away. Madrid next year anyone?