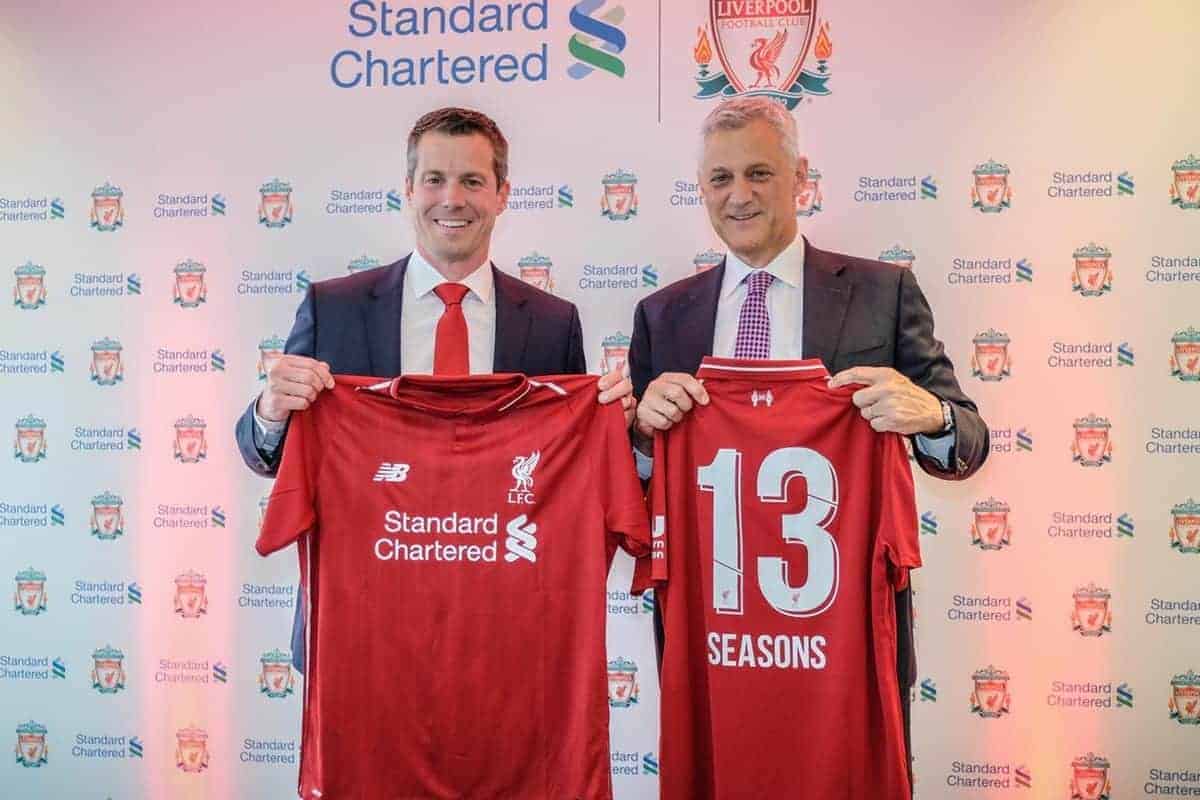 Liverpool FC have announced the extension of their shirt-sponsorship deal with international banking group Standard Chartered to the end of 2022/23.

The renewal of the deal will see the Club’s relationship with the bank extend to the end of the 2022/23 season. The partnership began in 2010 making it the second longest sponsorship deal in the history of the Club.

Since it began working together with the Club, Standard Chartered has reached over 37 million people across LFC platforms highlighting the UN’s Global Goals programme, had over 4,000 children participate in its soccer clinics, and for its annual ‘Perfect Match’ game – where LFC players swap the Standard Chartered logo on their shirts for the Seeing is Believing logo – fans have helped to raised almost USD 500,000 to tackle avoidable blindness.

The partnership has also reached almost 140,000 Reds supporters with LFC World, presented by Standard Chartered – an interactive fan experience which began in 2016 which brings fans around the world a little closer to Anfield. “As a Club we’re very proud to have Standard Chartered renew their relationship for another four years. Our connection runs deep, it means more than just sponsorship, from the outset it has been about working together with the Club and our communities and supporters around the world.

“Importantly, it also means we are able to support our ambitions on the pitch and compete with the best in the world. We have enjoyed many highlights of this relationship so far and I look forward to many more.”

“Liverpool FC is one of the world’s best-known football clubs and we are proud to be associated with them. It is a fantastic club that shares many of our values and is hugely popular across our global footprint. Our partnership has provided valuable support to the charitable initiatives close to our hearts and has helped us to further engage with our clients and staff as well as with LFC fans. We are excited to be able to continue this partnership, and look forward to building on our successful relationship.”

“It’s great to see what shared values in a partnership like this can really achieve and how our supporters at home and around the world can feel the positive impact of our relationship. I look forward to seeing this longstanding connection with Standard Chartered flourish even further.”