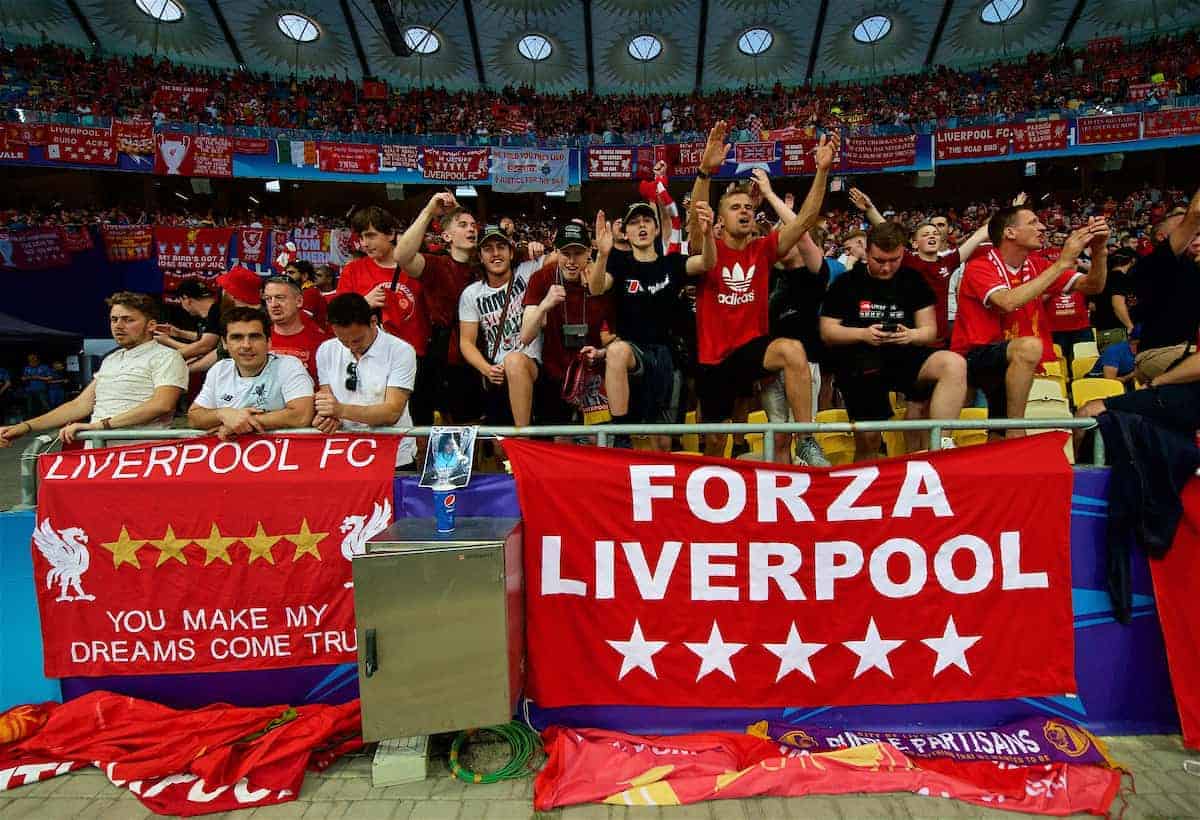 The ending wasn’t the one hoped for by the thousands that poured into Kyiv, but for those who were in Ukraine the city will far outlast the memory of the Champions League final itself.

Plenty of Reds, ourselves included, planned their journeys after the semi-final draw; buoyed by the avoidance of both Real Madrid and Bayern Munich, the pairing with Roma allowed fans to dream of the ultimate climax to what had been a thunderous season.

A calculated gamble was taken here at This Is Anfield HQ and flights from Stansted with an overnight train from Warsaw to Kyiv were purchased. At a little over £200 all-in, it was worth the risk even if things had gone wrong vs. Roma.

With flights from Liverpool and the rest of the UK priced at over £1,000 each, the luxury of a direct route became an impossibility for many, and with that the tenacity of thousands shone through.

Some endured the torture of a five-day round trip by coach; unable to lie flat for 120 hours is the stuff of nightmares, but to watch Liverpool possibly beat Real Madrid was all the impetus needed to power their bodies through a week on a coach trekking across Europe. For others, the European hop by air became the route of choice. Kyiv was awash with tales of trips that took in locations such as Turkey, Armenia, Georgia, Germany and Poland.

This Is Anfield writer Danny Gallagher went via Vienna, then returned via Armenia and Georgia – the flight between those two being in a 50-seat propeller plane.

Meanwhile, the overnight train from Warsaw to Kyiv will be remembered by those on board as the train from Lewis Gilbert’s “James Bond: The Spy Who Loved Me” – Soviet kitsch with border guards to match those from any Cold War silver screen epic. The journey was long and hot, the cabin cramped – imagine Harry Potter’s under-the-stairs dwelling but with three single bunk beds thrown in. Relatively easy once acclimatised, however, waving goodbye to your passport for two hours on the Ukrainian border at 4am was odd to say the least.

The fact you could drive the 16-hour train journey in half the time probably says more than any further elaboration ever could – but like the whole Champions League experience, this particular tale was to have one final twist on the way home. More on that later!

Despite the long and arduous process of getting there, the destination city soon warmed the hearts of those that arrived by plane, train and automobile.

Predictions of trouble from local Ultra groups reared their heads twice, and thankfully nothing more than a few cuts and bruises for those unfortunate enough to be caught up in it. On the whole, the experience was as far from this as it could possibly be.

Immensely proud of their heritage and culture, the residents of Kyiv opened their hearts and homes to visiting fans, especially to those adorned in red.

For every tale of extortionate hotel prices and AirBnB cancellations, there are those stories matched in equal measure by people opening up their houses for free and honouring earlier bookings.

In Independence Square and around the fan parks, locals posed for pictures with Liverpool fans, videoed renditions of Allez allez allez, and joined in with the songs that have followed the Reds across Europe this season. The bars were packed, the taxis full; the boost to the local economy cannot be understated.

For all of the failings by UEFA on the logistics of the final, the hospitality once there from the locals could not have been better.

On the invasion into their city the locals were equally as impressed. Our AirBnB host, Government Press Officer Karina Samokhvalova, described the visiting Liverpool fans as “clever, energetic and crazy!”:

“We saw the Liverpool bus drive past the cafe and everyone was cheering, Allez Allez, it was very nice, they were all kind-hearted.”

In the restaurants and bars around Kyiv, Liverpool fans shared stories of their travel and welcomed those who were on their own to join them, making new friends with fellow fans and locals alike. For most fans this was their first trip to Kyiv, but may not be their last – on a local Facebook group it was joked that they are expecting a baby boom in nine months’ time!

The weather was perfect, as was the ancient architecture. The mixture of the old Ukraine and Soviet-era occupation come together to showcase a city steeped in history.

All around there are flashes of the new Ukraine – ‘Ukraine is Europe’ declared one sign. Something very much at the top of the agenda is closer relations to Europe, with a distinct distancing from the old neighbour, and aggressor, Russia. Football is a way of life for many in the city of Kyiv, not that dissimilar to the way of life on Merseyside; the chance to hold the greatest club competition of them all was something they were understandably excited about. Billboards, banners, temporary statues and even flower pots showcased the event, the hosting of the ultimate game something that will stay with the city for many a year.

On the pitch, the result was definitely not the one wanted, but as any travelling supporter will tell you – the match is just 90 minutes of a bigger experience. This one will last longer than that of Basel or Athens, and with Jurgen Klopp at the helm you just feel it won’t be the last epic journey supporters make together.

If the lasting impression for those who travelled to Kyiv will be remembered fondly, what memories of the hosts? The Foreign and Commonwealth Office reported on Tuesday that Ukrainian journalists had declared:

“LFC may have lost the game but the fans won the hearts of Kyiv’s residents. We are very lucky that Liverpool made it to the Final. It was them who brought festivity and a great atmosphere to the city”

The scenes in Schevchenko Park pre-match will live with those who were there forever. It was especially heartening to see younger fans in huge numbers. You can’t help but think they are set for some special times supporting this club in the years to come.

But what was the final twist on the train home? Well, if this whole episode had been a melting pot of new experiences on foreign soil then the midnight smuggling express from Kyiv to Warsaw was to be the icing on the cake.

If the journey over was long and hot, then the return leg felt like your face had melted into your feet. Hotter than anything I’ve experienced (no air con this time around).

Dawn hadn’t long broken before the trainload of Scousers were asked to leave their cabins on the Monday morning after the final, three miles into Polish territory – nothing to do with their behaviour, it was the antics of the Ukrainian engineers in Kyiv that caught the Polish Special Police’s attention.

A cursory search turned into the dismantling of the whole train. Cabins were pulled apart, every roof panel removed and the non-functioning air conditioning units were examined. No one had a clue why, until the police shouted when they struck gold, or should I say, counterfeit tobacco.

In every nook and cranny, both inside and outside of the train, counterfeit cigarettes were stashed, and not just a few – we’re talking 10 thousand-plus packets; pulled from every conceivable hiding place.

Surely this was a one-off, a big tip off? “Does this happen often?” we asked the Polish commander: “Every f**king day.”

It’s not every day you get to experience these trips and share these memories. Football isn’t just about the football.