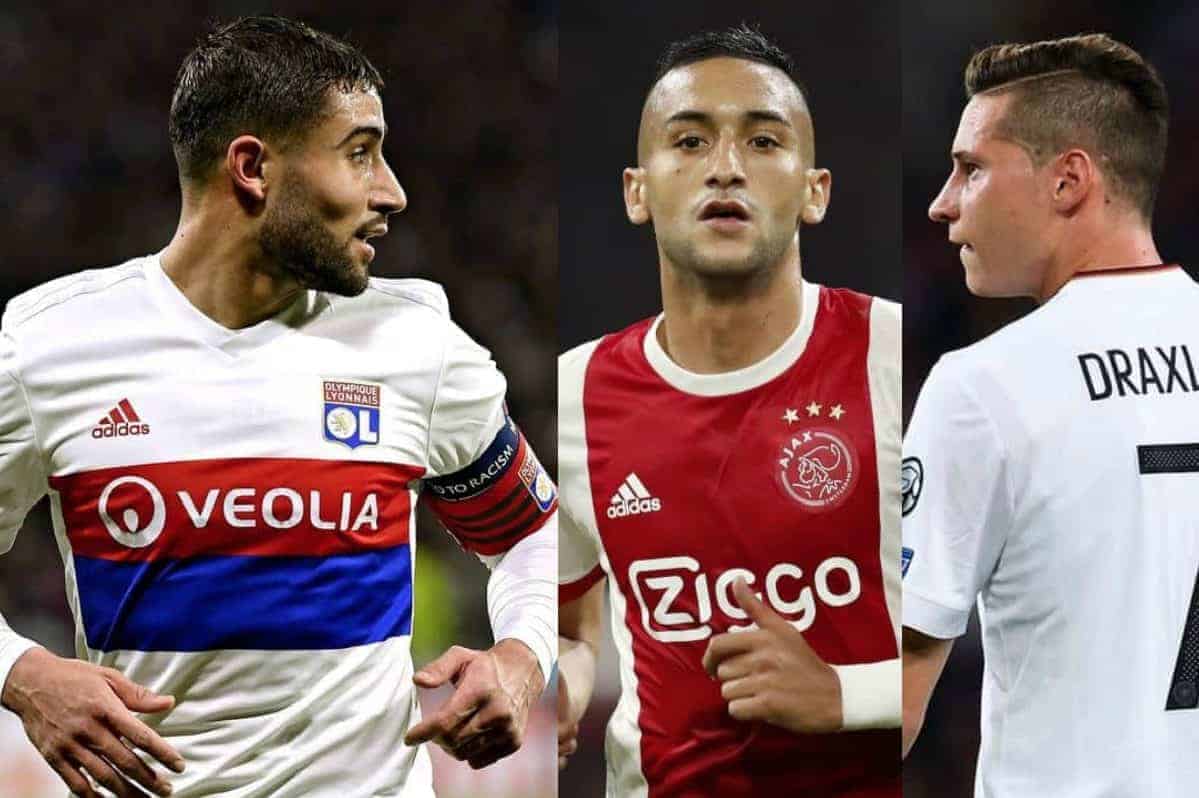 The breakdown in Liverpool’s pursuit of Lyon attacking midfielder Nabil Fekir is a blow, but there are alternatives for Jurgen Klopp to consider.

The Reds looked set to make Fekir their third big-name signing of the summer until the final hour, when complications arose following his medical.

Klopp’s side pulled out of a deal with Lyon due to concerns over his knee, and though they could revive their interest on different terms this remains to be seen.

If, instead, they turn elsewhere in the transfer market, Liverpool will need to identify a similar versatile talent who can serve as both playmaker and finisher.

Fekir could have provided similar qualities to the departed Philippe Coutinho, and seemed almost uniquely qualified to fill the role this summer.

But there are other avenues to explore, and here are five options the Reds could assess. Liverpool were vying with PSG for Draxler’s signature at the beginning of 2017, but opted out of negotiations after the playmaker’s agent used interest from the Ligue 1 club to up their wage demands.

This was a strong stance from the Reds, with Klopp clearly not willing to call upon a player not committed to the cause beyond a financial sense, but Draxler’s muted spell in Paris could change that.

The 24-year-old certainly hasn’t failed at PSG, but he has not commanded the key role perhaps expected on his £34 million switch to the French capital, starting 29 of his 47 outings last term.

Interestingly, Draxler has largely been utilised as a central midfielder during his time at the club, and pairing this with his previous experience as a forward could be perfect for Liverpool.

Much will hinge on how he factors into new manager Thomas Tuchel’s plans, but if not—and Klopp is willing to give him another chance—Draxler would be a brilliant marquee signing. Named Ajax’s Player of the Year after scoring nine goals and assisting 18 in 39 games for the Amsterdam side last season, Ziyech has been roundly touted as the ideal Fekir alternative.

Though born in the Netherlands, the versatile attacking midfielder turns out for Morocco and will be their talisman at this summer’s World Cup, taking up a big responsibility for both club and country.

Ziyech made more key passes (142) than any player in a top-flight league in Europe last season, with the next closest being Dimitri Payet (121).

His creativity is a key trait, but Ziyech is also capable of winning the ball in midfield and taking players on, and is a threat from set-pieces too.

He is on Roma’s radar this summer, with the rumoured price tag being around £40 million, and still only 25 this could be a worthwhile outlay as Klopp searches for his next No. 8. The least-experienced option on this list, Leverkusen prodigy Havertz would arguably be the biggest risk this summer, but one with a vast pay-off.

At just 19, Havertz already has two seasons of senior football under his belt in Germany, having made 63 appearances so far for Leverkusen following his debut in the Bundesliga in 2016.

A tall, creative attacking midfielder who has been compared to Mesut Ozil, the teenager was linked with the Reds towards the end of last year, with suggestions he had already visited Melwood and met Klopp, Steven Gerrard and Philippe Coutinho.

The prospect of him replacing Coutinho as Klopp’s long-term project in the No. 8 role is an interesting one, and Havertz certainly has the quality required to do so.

Two-footed and possessing an strong passing range, the German has great perception and control, and though he is yet to prove his ability as a regular goalscorer he could be moulded as the spearhead of Liverpool’s midfield. Liverpool failed in their attempts to sign Zielinski ahead of Klopp’s first full season on Merseyside, with the midfielder eventually swapping Udinese for Napoli in a £14 million deal.

He has quietly developed in Naples, and though the asking price would be considerably higher it may be worth the Reds revisiting their interest this summer.

Most comfortable operating as a roaming central midfielder, Zielinski could take up the No. 8 role previously earmarked for Fekir, while also having the potential to deputise out wide if needed.

His ability to press, drive a forward charge and ghost into the box to finish chances would see him dovetail well with Naby Keita, particularly with the stability of Fabinho behind the pair.

Zielinski’s release clause is reportedly worth around £57 million, which would put him in a similar bracket to Fekir, and if Liverpool are willing to spend big he would be a fine alternative.

Like Zielinski, Thauvin has already been on Liverpool’s radar during Edwards’ tenure at the club, albeit when he was serving as director of technical performance in 2013.

He ultimately joined Marseille from Lille that summer, and after an ill-fated half-season with Newcastle United in 2015 he rejoined the Ligue 1 side looking to restore his reputation.

Thauvin’s initial struggle in the Premier League should not serve as a red flag in considering the versatile attacking midfielder as an alternative to Fekir, as he has matured rapidly back at Stade Velodrome.

Like Fekir, he is left-footed but capable of operating across the forward line, and while his eye-catching 26-goal, 18-assist campaign last time out came largely on the right flank, he is built to suit the No. 10 role.

There may be concerns over Thauvin’s work rate, but his commitment since returning to France suggests he would be up to the challenge of working under Klopp.

If Liverpool could strike a deal with Marseille his balance, control and eye for goal would be a welcome addition to Klopp’s squad.