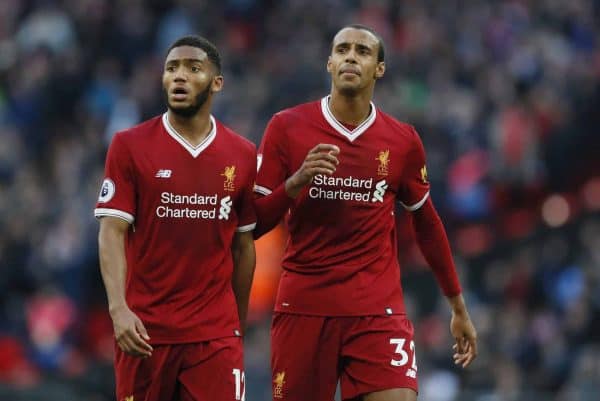 8 Liverpool players who need to impress in pre-season

Pre-season will give some a number of Liverpool players a chance to prove their worth, from youngsters to more established figures.

The Reds return to Melwood on Monday, except for the eight players participating at the World Cup in Russia.

New signings Naby Keita and Fabinho will be present as Jurgen Klopp starts his preparations for the new Premier League season.

We all know which individuals will be key for Klopp in 2018/19, but what about those who are under a little more pressure to impress?

Here are eight players who are facing a make or break few weeks to make their mark for the new season.

While Loris Karius and Simon Mignolet flattered to deceive at different times in 2017/18, Danny Ward simply watched on from the sidelines.

The Welsh international managed just one appearance, in the League Cup defeat to Leicester City, and his future is now up in the air.

With Mignolet expected to leave, though, Ward should get plenty of playing time during pre-season, competing with Karius and playing 45 minutes apiece early on.

With new goalkeepers constantly linked to Liverpool and Ward eager for first-team football, he has a huge opportunity.

Joe Gomez enjoyed a largely positive season last time around, but there were still areas of his game that were concerning.

An ability to switch off defensively proved frustrating and his late-season injury also set him back.

Pre-season offers Gomez a chance to rebuild, finding the form that saw him impress so much at right-back in the earlier stages of last season.

Klopp may well use him at centre-back, too, which is where his long-term future likely lies.

Dejan Lovren‘s impressive form makes him the current first-choice partner for Virgil van Dijk, so Matip must find another gear.

He is set to return from a thigh injury imminently and we must start seeing more of the player who shone early in his time on Merseyside.

Matip has all the attributes to be an excellent defender, but his timid style and inconsistent nature must change this summer.

The 30-year-old has fallen down the midfield pecking order and there is a feeling that his best days are now behind him, especially following constant injury layoffs.

Lallana is fortunate Klopp is such a big admirer, but the Liverpool manager is ruthless and won’t keep players for the sake of it.

While it is unlikely the former Southampton man will be sold, we need to see improvements in pre-season and a summer without an injury.

Back in November 2016, the world was Ben Woodburn‘s oyster after his League Cup strike against Leeds United saw him become Liverpool’s youngest-ever goalscorer.

He has struggled for first-team opportunities since then and just like Ward, his only appearance of the campaign came in the defeat at Leicester.

This summer, the 18-year-old must prove that he is worthy of being a first-team squad member at a club fighting for the Premier League title.

Competition for places is going to be more fierce than it has been in years and a pre-season where Woodburn looks a step below the rest could see him loaned out for a year.

Harry Wilson is in a similar position to his good friend Woodburn in that he is an excellent young player but someone who may struggle to make the grade at Liverpool.

The 21-year-old shone during a loan spell at Hull City last season, scoring seven goals and registered four assists in just 13 matches, but now is the time to show he can do it for the Reds.

Opportunities should come his way in pre-season, with the likes of Mohamed Salah and Sadio Mane returning later than others.

Wilson will feel he is ready become to a reliable member of the squad who can produce influential cameos from the bench – prove it this summer, Harry.

Dominic Solanke was a disappointment last season, considering the reputation he arrived with after his performances at the U20 World Cup with England.

It took him until the final day of the Premier League season to score his first Reds goal and he often looked out of his depth as a backup to Roberto Firmino.

Solanke will know full well how strong the competition is going to be in 2018/19, so he needs to impress in pre-season and start playing with a little more pizzazz.

He has been linked with a loan move, with Steven Gerrard reportedly keen to take him to Rangers, but the young striker will be desperate to prove his worth at Anfield.

Some pre-season goals would be just what the doctor ordered.

Divock Origi has become something of a forgotten man at Liverpool.

It was only a couple of years ago that he became the Reds’ first-choice striker in their Europa League run, but he has since struggled and spent last season on loan at Wolfsburg, scoring just six times in 34 appearances.

The Belgian has one final opportunity to show what he can offer this summer, as he returns to Melwood to meet up with his teammates again.

Many feel he is still a better option than Solanke and it may be that the pair end up auditioning against one another, which can only be healthy in terms of getting the best out of them.