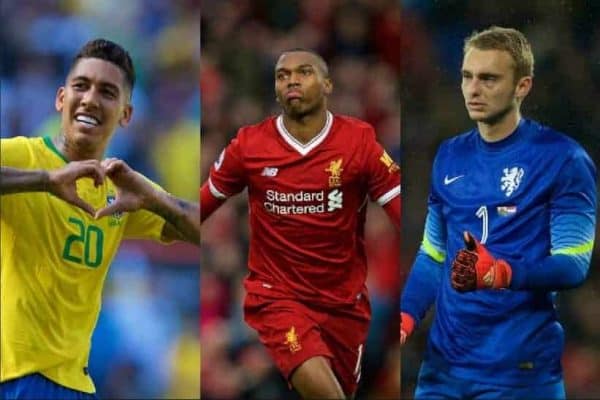 We round up the latest Liverpool news and transfer rumours on Monday, as Jordan Henderson and Trent Alexander-Arnold kick off their World Cup.

Liverpool’s midfield is already looking far stronger with the addition of Fabinho and Naby Keita, with the Reds set to have an extra attacking dimension next season.

Further additions are still expected this summer, and a rumour that has come out of the blue has linked Bayern Munich midfielder Corentin Tolisso with a move to Anfield.

According to Calcio Insider—let’s face it, far from the most reliable of outlets—a source close to them has said it is Tolisso’s “dream” to represent Liverpool.

Tolisso became the most expensive player in Bundesliga history when he joined Bayern for €41.5 million last summer, and he scored six goals and registered four assists in the league in 2017/18.

The 23-year-old also started for France in Saturday’s 2-1 win over Australia at the World Cup, and is generally a box-to-box midfielder.

He would certainly be a good addition, but don’t bank on it happening any time soon, with Bayern no doubt keen to keep hold of a prized asset.

Daniel Sturridge has no future at Liverpool, having never suited Klopp’s style of play from the moment the German arrived on Merseyside.

Having been on loan at West Brom since January, a permanent move for the 28-year-old will almost certainly come to fruition this summer.

Fanatik believe Besiktas have moved a step closer to bringing Sturridge to the club, with manager Senol Gunes giving the board the green light to sign him.

It would bring to an end a Liverpool career littered with moments of genius, but also one that flattered to deceive because of injury problems.

The Man City youngster is an excellent player with huge potential, but Firmino’s form and confidence are on another level at the moment.

That was highlighted on Sunday, as Liverpool’s No. 9 did more in his short cameo than Jesus managed all game, twice coming close to earning Brazil a 2-1 victory over Switzerland.

After the game, Tite admitted he was impressed with Firmino’s showing, perhaps hinting he would start Friday’s match against Costa Rica.

“Roberto Firmino is living in a moment of confidence. When he entered the pitch, he did a good job. He played very well,” Tite told reporters.

The Brazil boss is a big fan of Jesus, however, so don’t be surprised to see him keep his place.

On Monday night, Alexander-Arnold could make his World Cup debut, should Gareth Southgate use him off the substitutes’ bench against Tunisia.

The 19-year-old’s meteoric has been the stuff of legend over the last 12 months, and someone who is impressed is former Reds favourite Steve McMahon.

He has told Alexander-Arnold, in what is a rather original piece of advice, to diarise his adventure in Russia, standing him in good stead for the future.

“This is a success story for him and for Liverpool, because it can only make him better,” McMahon told LiverpoolFC.com:

“It’ll be exciting for Trent [and] he should come back buzzing even if he doesn’t play a game [because] he’s been part of the setup at a World Cup finals—something youngsters don’t tend to get.

“He should be looking forward to it. He had a tremendous season with Liverpool, and my piece of advice to him would be to keep a diary.

“I wish I’d wrote it all down and savoured the atmosphere so I’d have a scrapbook as such for that World Cup finals, because in 20, 30 years’ time, you’ve forgotten about what it was like and you forget all the little details that you went through.

“Keep a diary, a scrapbook that gives you a detailed analysis of the World Cup finals that you went to for your first time.”

In fairness, it is something Alexander-Arnold may end up treasuring in years to come, as he looks to blossom into a star for club and country.

Make no mistake, ongoing rumours linking the Reds with a move for a new goalkeeper will not stop emerging all summer.

Loris Karius‘ performance in Kyiv has ensured that, with possible replacements lined up, from Alisson to Thomas Strakosha.

According to Mundo Deportivo, another option, Jasper Cillessen, has caught the eye of Roma.

With Alisson likely to join Real Madrid before the start of the season—Liverpool are not out of the hunt yet, though—the Giallorossi will be in need of a new man between the sticks.

Cillessen has a £50 million release clause at Barcelona, which could be a stumbling block, but Roma director of football, Monchi, is thought to have already been in contact with Barca.

Let’s wait for the next target to emerge at Liverpool, should Cillessen head to Stadio Olimpico.

There are now just two teams who have turned down a place for their academy sides in next season’s Checkatrade Trophy.

Liverpool are one of them, along with bitter rivals Man United, after Arsenal accepted participating in it, with the Liverpool Echo confirming the news.

Known as the EFL Trophy, the competition used to include clubs from only League One and League Two, but academy teams in the Premier League and Championship were introduced in 2016.

Six Premier League clubs originally declined the offer, but that figure has since dwindled.