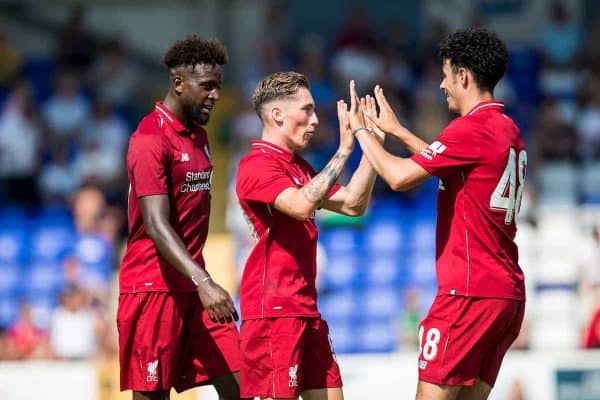 As the rest of the country watched England’s World Cup quarter-final, Liverpool began their pre-season with a match at local north-west side Chester.

The first half saw Jurgen Klopp‘s side line up in a 4-2-3-1 formation, with Ben Woodburn in a midfield role alongside new signing Fabinho.

Harry Wilson lined up on the right, with youngster Curtis Jones on the left and Dominic Solanke central behind Divock Origi.

Joe Gomez got a run in his preferred centre-back role alongside Nathaniel Phillips.

Liverpool dominated for the most part in the sweltering conditions and Wilson in particular looked good. It was the Welsh winger who opened the scoring with a close-range tap in after Alberto Moreno‘s run and shot down the left.

And Wilson made it 2-0 just before half-time, again tapping home from close range.

Half-time saw the long-awaited introduction of new signing Naby Keita, with the midfielder lining up alongside James Milner as the Reds kept a similar shape to the first 45.

There was an early goal as Daniel Sturridge played a nice through ball for Sheyi Ojo and he was brought down when trying to round the ‘keeper. Milner dispatched the spot-kick to make it 3-0.

It was 4-0 not long after as Sturridge got himself on the scoresheet with a nice finish.

And as news filtered around of England taking a 2-0 lead in Russia, Ryan Kent added a fifth for Liverpool, firing in from 22 yards with a lovely strike.

As you’d expect, the Reds controlled the game, especially as the home side tired in the heat and Danny Ings added a sixth with a nice finish from eight yards.

Keita grew into the game and showed some nice touches and good tackling ability, while Roberton and Milner looked sharp and in good fitness.

The defence was rarely tested in the second half especially, so very little opportunity to assess Danny Ward.

Sturridge added a seventh late on with a lovely finish from the edge of the box.