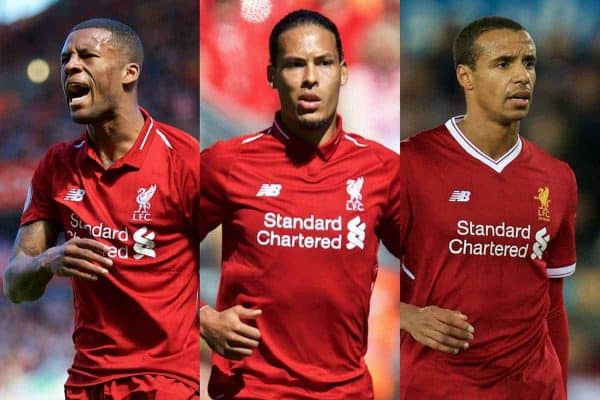 Jurgen Klopp has provided an update on the fitness of Georginio Wijnaldum, Virgil van Dijk and Joel Matip ahead of Liverpool’s clash with Bury.

The Reds take on their League Two opponents at Gigg Lane on Saturday, in the third of nine pre-season friendlies as they prepare for 2018/19.

Having so far recorded victories over Chester and Tranmere Rovers, the Shakers will provide another test for Klopp’s side, after only narrowly winning at Prenton Park on Tuesday night.

Klopp has fielded two different XIs in both of Liverpool’s outings so far, and speaking to LiverpoolFC.com on Thursday he confirmed he would continue this approach at the weekend.

The manager also revealed that both Van Dijk and Matip would be fit to feature, but Wijnaldum is a doubt having missed training.

“It’s pre-season so I don’t know exactly who will be ready for Saturday, to be honest,” he said.

“I hope Joel [can play], it looks like that. Virgil can play. Gini was not in training this morning.

“That’s pre-season, sometimes they feel a little bit here or a little bit there and the medical department tell me: ‘not today’.

“I don’t know if he will be in tomorrow, we will know that a little bit later.”

Both Danny Ings and Daniel Sturridge were not present during the first of Liverpool’s two training sessions on Thursday, with their absence raising concerns over their fitness.

Ings missed the win at Tranmere due to “severe blisters,” while Sturridge’s injury issues are long documented, but the pair are also expected to leave Anfield this summer.

If a move is in the offing that may be the reason they were not seen working with Klopp’s assistant Pepijn Lijnders, though Wijnaldum is seemingly not close to joining Fenerbahce as rumoured.

The availability of both Van Dijk and Matip will allow Klopp further options in rotating his side in Greater Manchester, having been short of natural centre-backs.

Pedro Chirivella deputised at the back against both Chester and Tranmere, and it was his mistake that saw the latter score their second to claw back to 3-2.

Joe Gomez, Ragnar Klavan and Nathaniel Phillips have also been included, ensuring Klopp now has a group of at least five centre-backs for the trip to Bury.