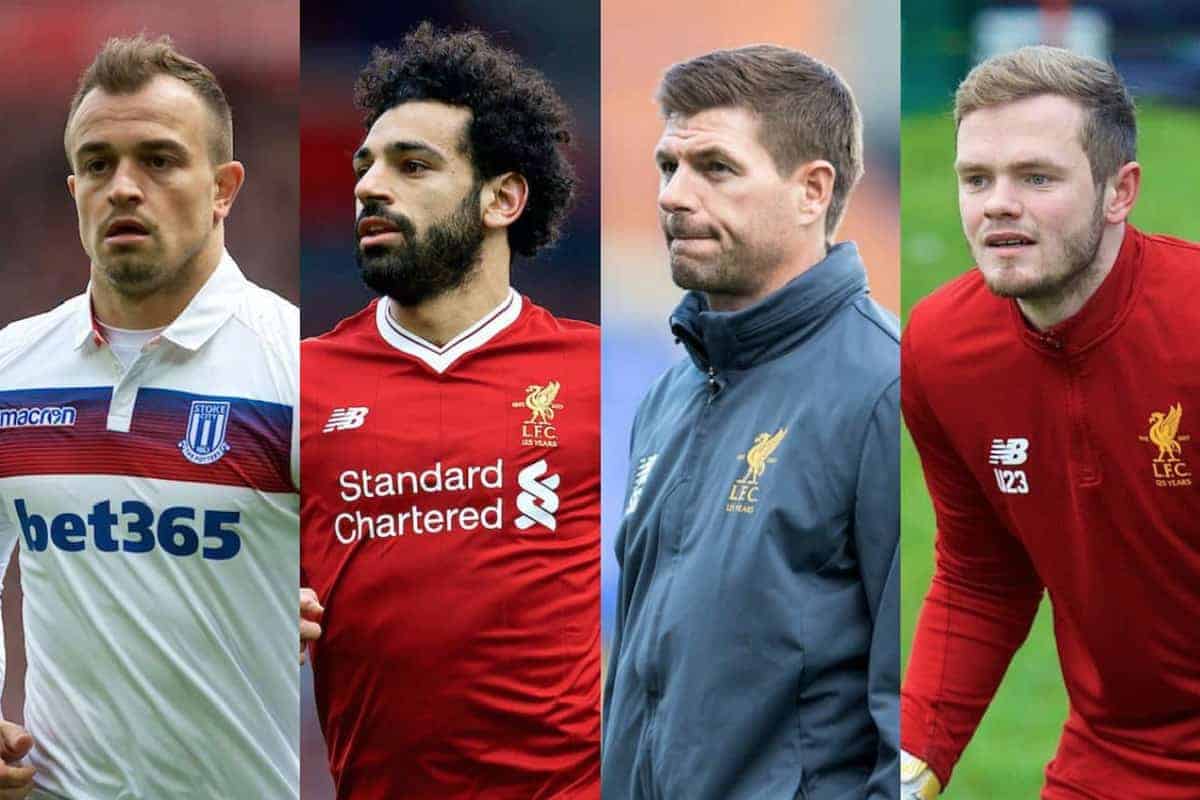 We round up the latest Liverpool FC news and transfer rumours on Friday, as Roberto Firmino aims to reach the World Cup semi-finals with Brazil. There have been plenty of those supposedly ‘in the know’ who believe Xherdan Shaqiri will have a medical at Liverpool on Friday.

The Liverpool Echo‘s James Pearce has been quick to quash those claims, however.

Pearce states that Liverpool “retain an interest,” but “they have yet to make an official approach for the Stoke City winger.”

This does appear to be a transfer that will be completed at some point in the near future, unless something drastic happens.

Shaqiri will be a good signing for the Reds, adding great depth to the squad and giving Jurgen Klopp more options in the final third.

There are some doubts over his attitude, but Klopp has never been someone to sign a player he doesn’t think he will be a positive influence.

The 32-year-old centre-back is one of the more disposable members of Klopp’s squad and it wouldn’t be a huge surprise if he left. Much may depend on whether a new centre-back arrives this summer.

With Philippe Coutinho long gone and a deal for Nabil Fekir up in the air, Liverpool may be eyeing up other No. 10 options this summer.

Someone who would be a dream buy is Juventus’ Paulo Dybala, who unfathomably barely got a kick for Argentina at the World Cup.

According to TuttoMercatoWeb in Italy, Liverpool have turned their attentions to the gifted 24-year-old:

“There was a contact between the impresario Gustavo Mascardi, historically close to Paulo Dybala, and the English club.

“The Reds are focusing strongly on Dybala, there is a willingness to formulate a concrete offer.

“And from those who are close to the former Palermo striker, there could also be the intention to facilitate a possible negotiation.”

With Cristiano Ronaldo tipped for a possible shock move to Juventus, this could pave the way for Dybala to leave.

The rumour shouldn’t be taken too seriously, but the Argentine would be an unbelievable signing if a move ever materialised.

African Pair to Return for US Tour

A World Cup summer can always be problematic for managers, with players returning to pre-season at different times.

Mohamed Salah and Sadio Mane have been enjoying a break after their excursions in Russia, with neither involved in Saturday’s clash with Chester.

But Klopp has confirmed that the duo will be back in time for Liverpool’s tour of America, however, with the squad departing on July 20.

It is unlikely that Salah and Mane will feature in the International Champions Cup match against Borussia Dortmund on July 22, although they should play a part when the Reds face Man City (July 26) and Man United (July 28).

Ryan Lowe is a lifelong Liverpool fan who enjoyed an impressive playing career for the likes of Shrewsbury Town, Bury and Sheffield Wednesday.

The 39-year-old has been named Bury’s full-time manager after being player-manager last season, and a great summer awaits him.

Lowe will stand in the opposite dugout to good friend Steven Gerrard when the Shakers take on Rangers at Ibrox on Friday, before facing his boyhood club on July 14 at Gigg Lane.

In an interview with Goal, he spoke of his excitement about taking on Gerrard and his love of Liverpool:

“Gerrard and then Klopp—not a bad start to the season, is it?

“I’ve been on holiday with [Gerrard], I was at his wedding, I’ve followed him all over the world watching him and his amazing career. Now I’ll be in the opposite dugout, it’s a bit surreal but I’m looking forward to it.”

“For me, [Liverpool are] the best club in the world. They’re the club I’ve supported all my life, and it’ll be a pleasure to welcome them to Bury.

“Again, I can’t thank them enough for agreeing to come down. We’ll treat them with the respect they deserve, hopefully give them a good game and, in an ideal world, it’ll be the start of a relationship between the clubs.”

Gerrard Backs Liverpool for the Title This has to be a season in which Liverpool produce a genuine title challenge, with Naby Keita and Fabinho improving the Reds significantly.

Someone who believes they can go all the way and end 28 years of hurt is Gerrard, as he told Press Association Sport:

“I think Liverpool are very close, I think they are knocking on the door.

“I am delighted with where Liverpool are right now.

“Of course I wanted them to win the Champions League and I’m disappointed they never [did] but when you look at the big picture—and the journey they are on—it is a very exciting time being part of this Liverpool setup.

“They have a terrific manager leading the charge and they have started making improvements and as a fan and an ex-player it is great to see.” Signing a new contract at Liverpool must be a special feeling for any young player, and Andy Firth is the latest to have experienced it.

The 21-year-old goalkeeper spent half of last season on loan at Chester, making 11 appearances for the National League North side.

Firth took to Twitter on Friday to confirm his new deal, writing:

“Delighted to announce I’ve signed a new contract at Liverpool! Looking forward to my 12th season at my childhood club!

“Massive thanks to my family, friends and all the staff at the club for making this possible.”

Firth has been a regular member of Liverpool’s U23s squad, competing with the likes of Kamil Grabara, Caoimhin Kelleher and Shamal George for playing time.

The club clearly have faith in his ability and he will hope to push on next season.