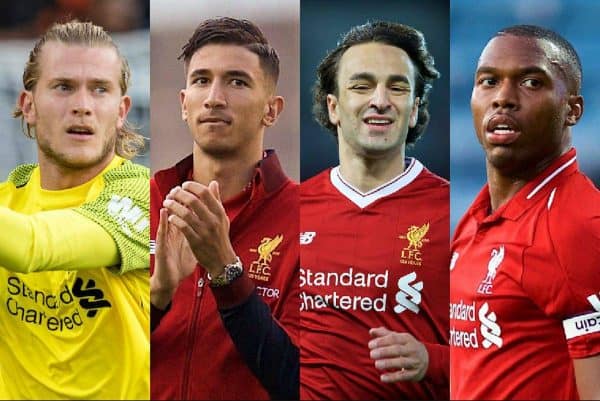 We round up the latest Liverpool news and transfer rumours on Tuesday, as the Reds prepare to face Man City in New Jersey.

It’s fair to say Loris Karius has taken a battering of late and his future at Liverpool is now very much in doubt.

Plenty have been leaping to the defence of the under-fire goalkeeper, however, not least former Spain and Real Madrid legend Iker Casillas.

The 37-year-old took to Twitter to share a video of his own numerous errors down the year, adding the caption:

“Behind each one of us, there is one person. Let him raise his hand who has not ever failed. Learning from our mistakes will make us stronger and accept them more human.”

Daniel Sturridge has discussed how he feels “at home again” at Liverpool, following an excellent pre-season that has garnered three goals and an assist.

The 28-year-old had been expected to leave Anfield before the end of the transfer window but there appears to have been a change in Klopp’s thought process.

According to the Liverpool Echo‘s James Pearce, Sturridge “has impressed Klopp with his attitude and application in pre-season”, and the club are willing to risk him leaving on a free transfer next summer.

It is such a pleasing turnaround for Sturridge, who has suffered with dreadful injury problems over the past four seasons and was loaned out to West Brom in January.

Marko Grujic and Lazar Markovic have both been tipped to be part of a £100million clear-out by Liverpool this summer, with seven players linked with moves away from Anfield.

Now, Serbian football journalist Milos Markovic has taken to Twitter to add fuel to the fire, saying his compatriots will likely be gone by the time the new season starts.

He states that Jurgen Klopp remains keen on Grujic long-term but wants to loan him out to newly-promoted Cardiff City again, while Markovic is allowed to leave permanently after a failed four-year spell with the Reds.

Leganes and Getafe are both thought to be interested in the wide man.

Last season was Klopp’s best yet at Liverpool and he came within one win of Champions League glory in Kyiv.

He will do well to win it, but it’s a proud achievement nonetheless.

Meanwhile, Mohamed Salah has been nominated for the Best FIFA Men’s Player prize, following an outrageous first season at Anfield.

One of the laziest comparisons in football is that Naby Keita and N’Golo Kane are similar players, and former Arsenal midfielder Stewart Robson has joined the club.

“He can almost be as influential as N’Golo Kante at Leicester and Chelsea,” Robson told ESPN.

“He has the same athleticism, the same driving when he is running forward and when he is closing down.”

While some of what Robson says is correct, mainly about Keita’s off-the-ball influence, he is nothing like Kante as a player and it is strange to constantly use him as the go-to comparison.

In terms of natural ability, Liverpool’s new No.8 is far more like Philippe Coutinho than the Chelsea man, with skill and creativity in abundance.

Shamal George has signed a new extended deal with the Reds, on what is a proud day for the 20-year-old.

George will head straight out on loan for the first-half of the season, although he is not moving far, with Tranmere Rovers snapping him up until January next year.

The youngster has been a Liverpool player since 2009 and made seven appearances for Carlisle United during a stint at Brunton Park last season.