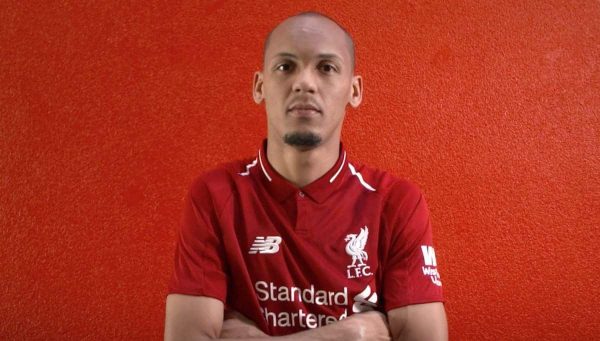 Liverpool’s newest recruit, Fabinho, has discussed the role Jurgen Klopp expects him to play, and the “party” day when he signed for Liverpool.

The Brazilian became the Merseysiders’ first summer signing at the end of May, with a fee of £43.7 million being agreed with French side Monaco.

Fabinho arrives as an almost direct replacement for Emre Can, adding competition for Jordan Henderson in the holding midfield role.

The 24-year-old is known for his versatility, having originally been right-back early in his career, and it seems Jurgen Klopp will not restrict him to one role next season.

Speaking to this month’s FourFourTwo magazine, Fabinho says he expects to display his versatility in 2018/19: “He’s said I might play in a few different positions but the plan is to use me in midfield and I’m available to play wherever he needs me.”

The new signing also explained how he celebrated joining a club of Liverpool’s stature:

“That day was party day! I was really anxious during all of the negotiations, so when it was time for me to sign the contract I couldn’t have been happier – a dream come true.

“When I was doing the medical exams I couldn’t I couldn’t stop asking people ‘When does it finally become official?’

“You don’t sign for one of the biggest clubs in the world every day you know!”

“A club with Liverpool’s history wants you? Come on, you just pack your bags and go! It will be an honour to wear the famous red shirt.

“For a club like Liverpool, a good season means trophies.

“Perhaps we can win the Champions League; we were so close to winning it last season. I’m optimistic about the future and I’m looking forward to winning a lot of titles with Liverpool.”

These are great words to hear from Fabinho, who immediately comes across as a likeable figure who is going to fit right in.

He is clearly overjoyed to be a Liverpool player and he will hopefully help inspire the Reds’ Premier League 2018/19 title challenge.

An ability to thrive in various positions is something that appeals to Klopp and Fabinho fits the bill to perfection.

Fabinho will become the seventh Brazilian to play for the Reds when he makes his debut for the club. His first appearance is set to be against Chester FC on Saturday.