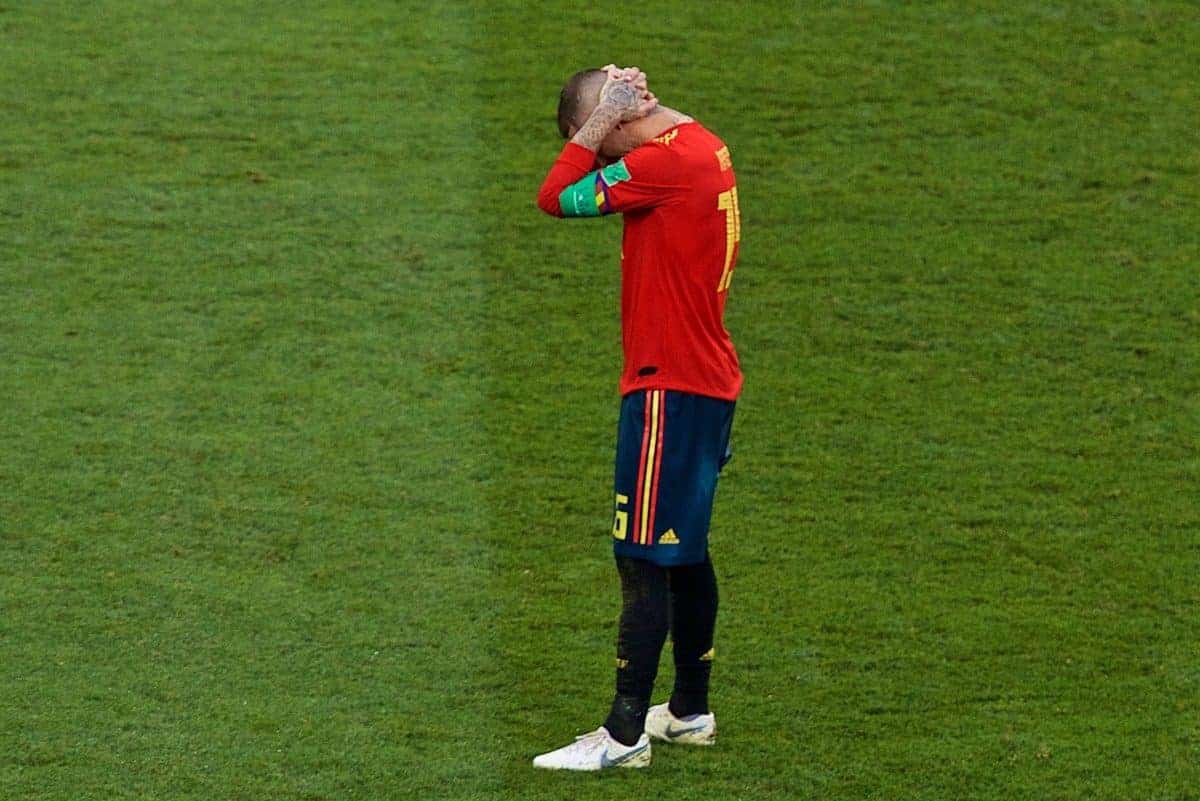 There was wonderful karma on Sergio Ramos as he exited the World Cup in tears, while Dejan Lovren has booked his place in the quarter-finals.

The World Cup is surely going to have a low-key day at some point, right?

Sunday saw yet more fantastic drama on show, as Spain were stunned by hosts Russia and Croatia progressed past Denmark, with both matches going to penalties.

The two victors now face each other in the quarters.

If you're ever sad, just remember the world is 4.543 billion years old and you somehow managed to exist at the same time as the 2018 FIFA World Cup.

Lovren is in a great place at the moment, as he continues to take his 2018 club form with him onto the international stage.

The centre-back was again impressive as Croatia just edged out the Danes and he must fancy his chances of going further in the competition.

Thankfully he didn’t take a penalty—given his penchant for drama, it would likely have landed in the top tier.

Luka Modric deserves a mention for displaying enormous courage, as he fired home his spot-kick having missed in extra-time. Best midfielder on the planet?

Kasper Schmeichel and Danijel Subasic were superb in goal in the shootout—Schmeichel also saved from Modric earlier—but it was the latter who prevailed in the end. Russia are a long way from the greatest, most attack-minded team around, but they showed great heart as they downed Spain.

They produced a well-drilled defensive performance and the noise inside the Luzhniki Stadium at the final whistle was something to behold.

Of course, it had to be former Liverpool man Iago Aspas, aka King of the Corners, who missed the decisive effort. David de Gea has been infuriatingly good for Man United over the last four seasons, maturing into the world’s best goalkeeper.

He has single-handedly earned Liverpool’s bitter rivals a vast number of points in that time, but this summer has been a very different story, typically.

De Gea has been pretty woeful and his World Cup campaign remarkably ended with just one save made.

When it came to the shootout with Russia, he should genuinely have saved two of their spot-kicks, if not three. He looked a shadow of himself.

Just watch him go straight back to Old Trafford and become the greatest ‘keeper in the history of the game!

Spain were pretty wretched in general, despite having all of the ball, with their ponderous, one-dimensional style proving sleep-inducing.

Much like Germany, they need a injection of young blood. Ever since Kyiv, Ramos has been public enemy No. 1, following his infamous foul on Mohamed Salah.

One the most snide players of his generation—a magnificent one too, in fairness—there has been a feeling that everything the veteran touches seems to turn to gold.

That was gloriously proved to be false on Sunday, though, as Spain crashed out on penalties in one of the shock results of the tournament.

As Russia celebrated their victory, television cameras caught Ramos beside himself on the pitch and Liverpool social media unsurprisingly went into meltdown.

It felt like the perfect karma, given the injustice of the Champions League final, and it also seemed like some sort of closure in a strange way.

Nobody puts Mo on the deck and rides off into the sunset forever after! Roberto Firmino will be looking to reach the quarter-finals on Monday, as Brazil face Mexico in an entertaining encounter.

Bizarrely, Liverpool’s majestic No. 9 looks set to start on the substitutes’ bench yet again, at the expense of Gabriel Jesus.

The evening action sees Simon Mignolet‘s Belgium take on Japan, with the European’s strong favourites to reach the last eight.