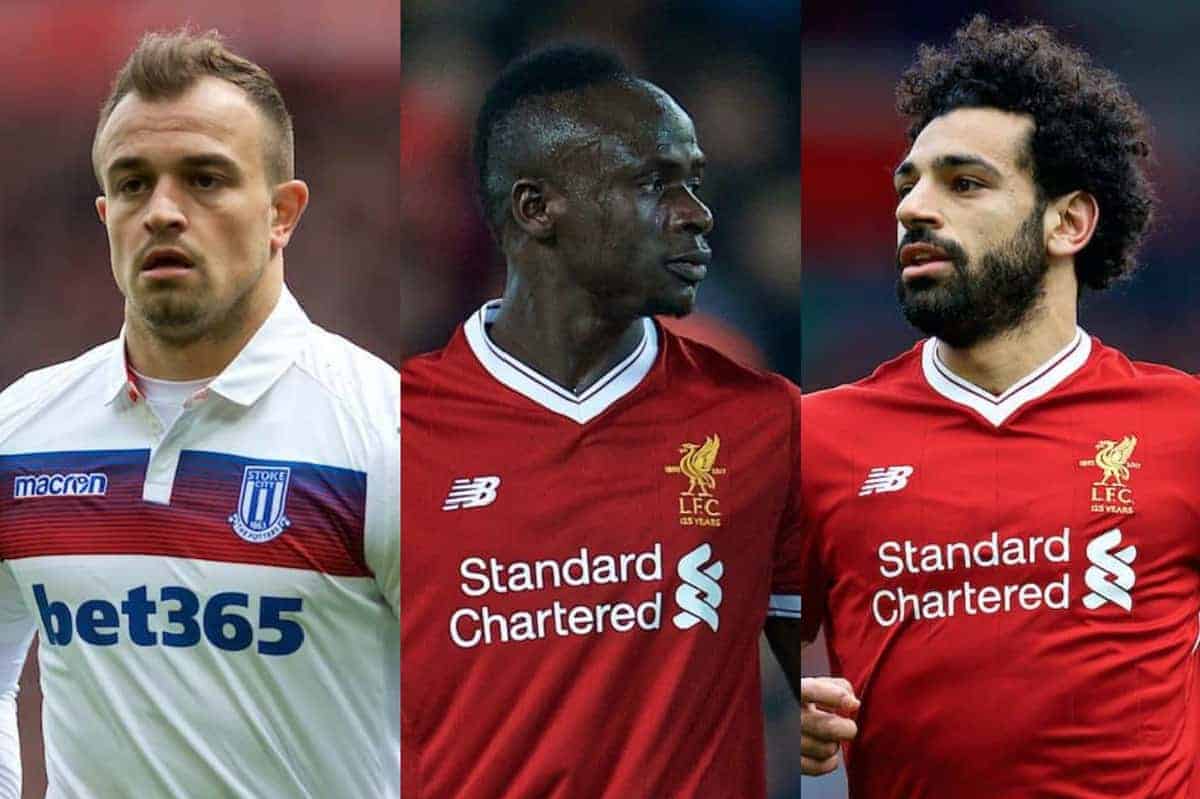 Xherdan Shaqiri is set to join Liverpool as backup for Sadio Mane and Mohamed Salah, but are concerns over his quality and work rate warranted?

The Reds are closing in on a deal for the 26-year-old Stoke City winger, and he is expected to join up with first-team squad for this month’s tour of the United States.

A release clause in his contract with the Potters made him available for around £13.5 million, ensuring a cut-price squad option for the new campaign.

But though his ability is unquestioned, there are reservations among supporters and pundits alike whether Shaqiri has the attitude required to operate within Klopp’s system.

Here, we compare his output from the 2017/18 season with that of Mane and Salah, who he will alternate with when required, with per-90 statistics from their defensive and offensive contributions: Though their roles were markedly different last season, it is interesting to note how Shaqiri holds up to Klopp’s key wingers in terms of his off-ball work.

The Swiss averaged over double the amount of successful tackles per 90 as Salah, while he made more interceptions than both the Egyptian King and Mane.

Tasked with being Stoke’s primary outlet, Shaqiri also created more chances per 90 on average, and while this clearly impacted on the frequency of his shots, he was marginally more accurate than Salah when testing the goalkeeper.

It is also notable that the Potters’ No. 23 was more creative than both Salah and Mane despite being equally as involved in Stoke’s passing play as Liverpool’s top goalscorer.

However, on a basic level Shaqiri’s impact in the final third will be measured in terms of goals and assists:

He scored eight goals and laid on a further seven assists in the league last season, topping the Stoke charts for both, but he was outperformed by both Mane and Salah.

However, as Potters supporter David Cowlishaw told This is Anfield back in June, their reliance on the diminutive winger put considerable pressure on him to perform.

“With Marko Arnautovic and Bojan out of the picture, Shaqiri was our sole creative force,” Cowlishaw explained, “but alas, his abilities weren’t enough to keep us in the Premier League.”

Only Mane, Salah and Roberto Firmino outscored Shaqiri in the Liverpool squad in the league, and the Reds’ No. 11 was the only player to lay on more goals.

Shaqiri registered the same number of assists as Mane, Firmino and Alex Oxlade-Chamberlain, and Klopp has clearly acknowledged the need to lighten the workload of his first-choice front three. The key criticism aim at Shaqiri, however, comes in his work rate and perceptions of his poor attitude.

Gary Neville, speaking to ITV as part of their coverage of Switzerland’s 1-1 draw with Brazil at the World Cup, labelled the ex-Bayern Munich winger as “unprofessional” for his approach in 2017/18.

“He could score the goal of the tournament and he could have the most amazing game,” he conceded.

“But he could also be there for three matches, do nothing and just amble and wobble around.”

Shaqiri’s defensive statistics bely that view, though Cowlishaw added “he is not a man for tracking back and running around.”

This may, as Neville touched upon, be due to the lack of quality around him on a sinking ship at Stoke last season, with the player himself expressing his frustration in March:

“The feeling that even a Ronaldinho could do little in this team is sobering.

“I had to realise that it’s a bit different when you have players like Ribery and Thiago at Bayern or Icardi and Kovacic at Inter.

“Here at Stoke I cannot exert too much influence, simply because there is a lack of quality around me.

“I cannot just down tools but it would take something extreme for Stoke in the transfer market this summer to revive my enthusiasm.

Liverpool have been largely flawless in terms of signings since Klopp took over in 2015, and this is partly due to the manager’s insistence that he judges their character before sanctioning a deal.

Klopp makes a point of meeting every potential signing, and if there were any fears of Shaqiri having ‘downed tools’ at Stoke this will have been allayed in his conversations with the German.

Like Oxlade-Chamberlain before him, Shaqiri will arrive under scrutiny from supporters due to his previous performances in the English top flight.

But his productivity during a decidedly poor campaign for Stoke under first Mark Hughes and then Paul Lambert should be evidence enough that this is a £13.5 million deal worth pursuing.