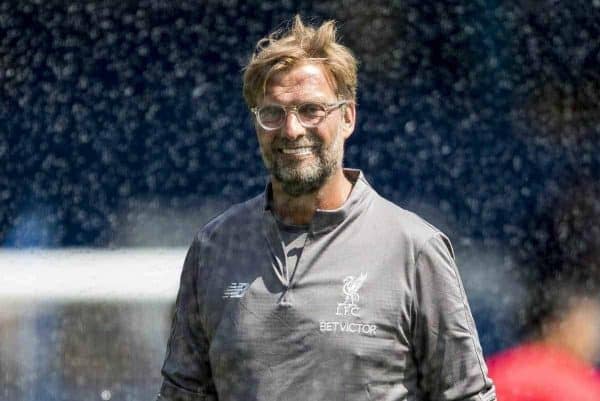 Video: Jurgen Klopp on Adam Lallana’s return and why Liverpool were “tired” at Bury

Jurgen Klopp has blamed himself for Liverpool’s “tired” display at Bury on Saturday, but lauded the return of Adam Lallana among other positives.

The Reds toiled away at Gigg Lane but were unable to build on consecutive wins over Chester and Tranmere Rovers in their opening two pre-season friendlies.

Though there were flashes of quality as Klopp made a raft of changes throughout once again, they were unable to break down a stubborn Bury defence.

Speaking to reporters including The Redmen TV after the game, the manager explained that the “intensity” of Liverpool’s training sessions, and the blistering heat, were the cause:

“The mix-up of intensity in training, a lot of information in training, very warm weather and a very dry pitch is not the best preparation for a football game.

“I think we all saw it, we could have scored five or six times with a little bit more in the last [stages of attack].

“But these were the good moments and the rest was really a lot of intensity in the body, with all the tired bones and stuff like this.

“I saw a little bit more in the first half than in the second half, but both [Liverpool] teams struggled and that’s OK.

“Making the right decisions when you are really tired, when it is really warm and the ball is not really rolling is very difficult. I knew that before, and that’s what we saw today.”

Lallana started in the 3-2 win at Tranmere in midweek and was part of the second-half XI at Bury, as he builds towards full fitness after a difficult campaign last time out.

Having missed out on a place in the England squad for the World Cup, the midfielder will be eyeing a regular role for Liverpool this season.

Klopp praised his availability, and highlighted the importance of pre-season in building “a proper basis” for 2018/19:

“What an exceptional footballer he is, but he needs the pre-season most if you want.

“Because it was a long time that he couldn’t train, then he had this really quick ‘pre-season’ to help us as quickly as possible.

“Now we are really building again a proper basis and that’s what is happening in the moment.

“That he is able to play football is not a big surprise.”

The manager also lauded the performances of youngster Curtis Jones, discussed the future of Daniel Sturridge and backed Dejan Lovren‘s claim he is “one of the best defenders in the world.”

Liverpool are next in action on Thursday night at Blackburn Rovers, in their final domestic friendly before setting off for the United States.