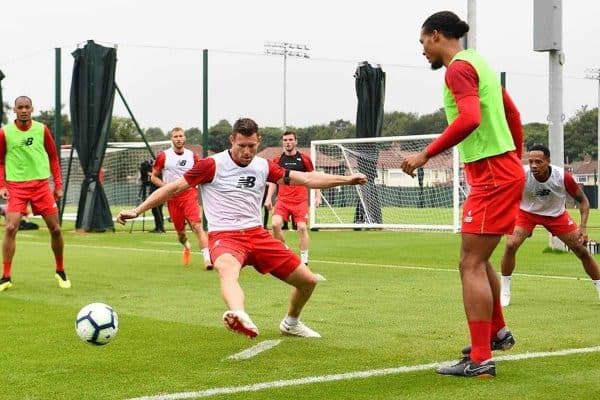 Jurgen Klopp and his coaching staff oversaw training at Melwood on Thursday as Liverpool prepare for the weekend’s pre-season friendly at Bury.

The Reds are set for their third of nine summer warmup clashes, having secured back-to-back victories over Chester and Tranmere Rovers.

A short trip to Bury will provide Klopp’s side another chance to build fitness and settle back in after a brief break, while new signings Naby Keita and Fabinho continue to integrate.

The pair were present as Pepijn Lijnders led one of the final training sessions before travelling to Gigg Lane on Saturday, but three players missed out.

Georginio Wijnaldum, who only arrived back on Sunday, Daniel Sturridge and Danny Ings were all absent, as speculation continues over their future.

Virgil van Dijk was present, however, as was Joel Matip, and the centre-back pair could make their first appearances of the summer against Bury.

Initially splitting into three groups for warmup drills, Lijnders then led the squad through ball work as Klopp watched on, underlining his faith in his assistant.

Both Loris Karius and Danny Ward were present, as Klopp mulls over whether to hand the latter first-choice duties ahead of 2018/19.

Karius’ error in the 3-2 win at Tranmere on Tuesday night suggested he was still struggling in terms of his mentality after the Champions League final, though no decision has been made on Klopp’s No. 1 yet.

After taking on Bury, the Reds will play one final domestic friendly against Blackburn Rovers before heading to the United States to take on Borussia Dortmund, Man City and Man United.

They will then head to a training camp in Evian, before two final friendlies against Napoli in Dublin and Torino at Anfield.