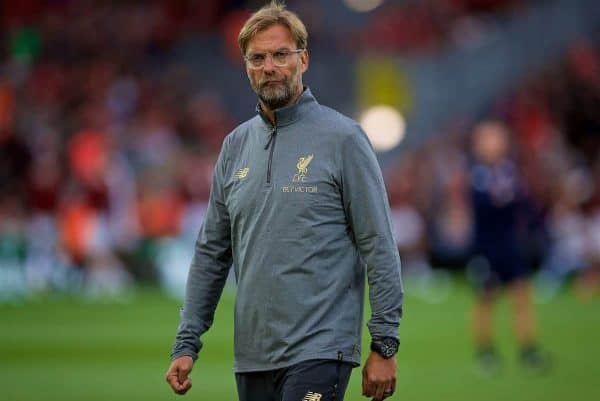 9 players who could still leave Liverpool this month

Liverpool’s 3-1 win over Torino saw several players not included in the squad—and with transfer deadline day around the corner, departures are expected.

The Reds rounded off their pre-season with a comfortable win over their Serie A opposition at Anfield, just under 48 hours before the window closes in England.

Five players who were not in the squad and are likely to leave either before Thursday’s domestic deadline or later in the month to a club abroad are Simon Mignolet, Pedro Chirivella, Lazar Markovic, Sheyi Ojo and Divock Origi.

Dominic Solanke‘s absence from the squad potentially puts his immediate future in doubt, with rumours of a loan move to Rangers.

Another forward, Danny Ings, came off the substitutes’ bench, but he has been expected to leave this summer and is linked with Crystal Palace, Southampton and Newcastle United.

Also making an appearance against Torino was Marko Grujic, but the young Serbian midfielder has been expected to depart either on loan or permanently this summer—despite a return to Cardiff City not materialising.

Finally, defender Connor Randall, who hasn’t been involved in the first team’s pre-season, will surely depart either on loan or permanently.

Others academy regulars such as Corey Whelan and Matty Virtue could also leave, though Neil Critchley‘s U23s squad is decidedly light at this stage already.

Loris Karius‘ future is still up in the air, but it is likely the 25-year-old remains on Merseyside unless a replacement is signed before Monday.

That the transfer windows for the rest of the European leagues remain open until the end of the month means even if players do not depart by Thursday’s 5pm deadline, they can still head out at some stage over the rest of August.