Jurgen Klopp has made no changes to his Liverpool side for the first away clash of the Premier League campaign tonight at Crystal Palace.

The Reds have arrived in south London boosted by a strong 4-0 victory over West Ham on the opening weekend, followed by an eight-day break to prepare for their next outing.

Klopp oversaw an 11-a-side training game at Melwood on Wednesday, providing those who didn’t start at Anfield an opportunity to get further minutes in their boots.

None of those come into the side at Selhurst Park, however, as Klopp fields the same lineup in search of three points.

Alisson keeps his place in goal, with the manager revealing that the Brazilian has undergone robust exercises to steel himself for the Eagles’ physical threat.

Ahead of him are Trent Alexander-Arnold, Joe Gomez, Virgil van Dijk and Andy Robertson, who will be eager to secure back-to-back clean sheets.

Georginio Wijnaldum will start in the No. 6 role in midfield, joined by James Milner and Naby Keita.

And Mohamed Salah, Sadio Mane and Roberto Firmino will provide the main threat in attack, with the trio already tallying three goals and an assist between them against the Hammers. 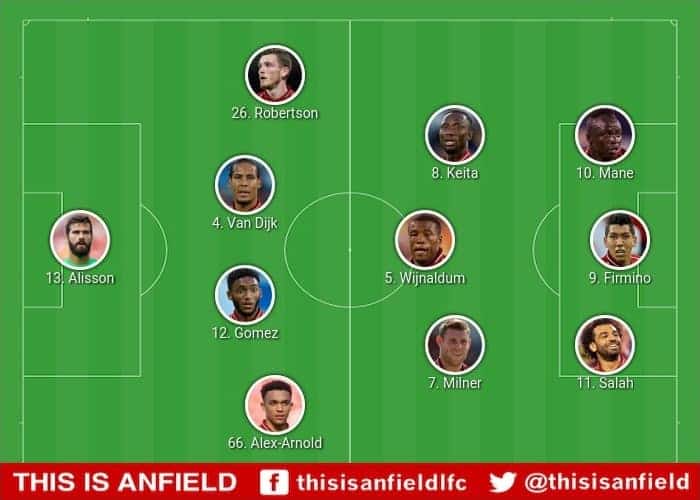 There’s no place for new signing Fabinho on the substitutes’ bench, but both Joel Matip and Alberto Moreno return after missing out against West Ham.

Simon Mignolet takes Loris Karius‘ role as backup, with the German set to complete a two-year loan move to Besiktas.

Fabinho did travel with the squad to south London, with no indication of injury, but Klopp has previously stressed that he would preside over a slow transition for the Brazilian.

Meanwhile, Roy Hodgson has named ex-Liverpool duo Mamadou Sakho and Christian Benteke in his starting lineup, with Martin Kelly also on the bench.