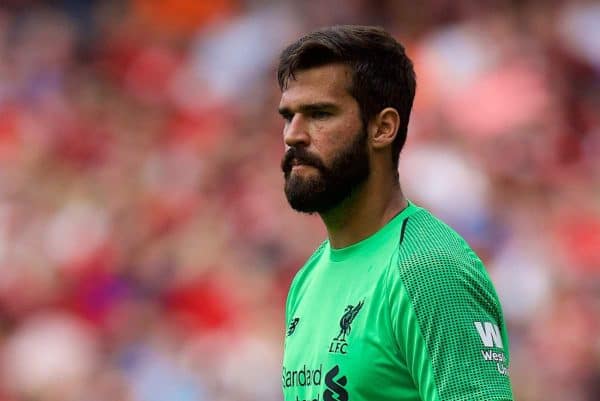 Jurgen Klopp praised Alisson for an “all-round good performance” as he made his first outing for Liverpool in Saturday’s 5-0 friendly win over Napoli.

The Reds rounded off their pre-season travels with a resounding victory over Carlo Ancelotti’s side, ahead of Tuesday night’s showcase clash with Torino at Anfield.

Goals from James Milner, Gini Wijnaldum, Mohamed Salah, Daniel Sturridge and Alberto Moreno capped an excellent result, but the focus after the game was on Liverpool’s new goalkeeper.

Alisson completed his world-record £65 million move from Roma midway through July, but joined the squad during their training camp in Evian due to his involvement at the World Cup with Brazil.

And making his long-awaited bow at the Aviva Stadium, he played the full 90 minutes in a display that impressed his new manager.

“He’s quite a good footballer!” he told reporters after the game.

“All-round good performance for the first game, everybody can imagine what happens inside a human being in a situation like that.

“First game after all the things written about it. Playing against Napoli, the strongest side we’ve played so far—100 percent—nearly the full squad here.

“He was very, very aware of all situations when he was needed behind a high line, involved a lot in our buildup—we need to get more used to that.

“In the end he’s there to catch balls and he did that in all decisive moments, so I’m pleased.”

Given the friendly took place in his home nation, there was considerable interest in academy stopper Caoimhin Kelleher, who has shone in his sporadic outings in pre-season.

Though he failed to make it onto the field in Dublin, Kelleher received a glowing review from Klopp in his post-match press conference—particularly for his composure at just 19.

“Very cool with the ball, you saw in the pre-season game when he played in front of 100,000 [in Ann Arbor], that’s a very important skill.

“[He was] long in his youth an outfield player, he’s really good in that.

“Fantastic reactions, if nothing serious happens he has a really interesting future.

“I don’t know in the moment how many really good goalkeepers Ireland has, but one more is never a big mistake.

“I like him a lot and I’m glad we have him in our squad.”

Kelleher could be in line for a more focal role for the first team in the near future, with the futures of both Simon Mignolet and Loris Karius under scrutiny in the final weeks of the transfer window.