Liverpool beat West Ham 4-0 on the opening day of the Premier League season and the players were in an understandably upbeat mood afterward.

Anfield was the setting for the Reds’ first league game in 2018/19, and they made it count with a dominant display and an impressive three points.

From the first whistle to the last, Jurgen Klopp‘s team were vastly superior to a much-changed Hammers lineup, bench and management included, and the result was a fair reflection of the match.

Mo Salah scored the opening after a great run from debutant Naby Keita, while Sadio Mane scored either side of half time to settle any opening-day nerves.

Daniel Sturridge, a late sub, scored with his first touch of the game to wrap up the victory. 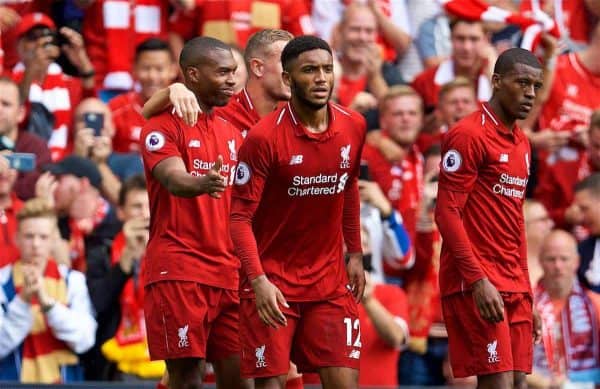 After the match, players were vocal about how important it was to get off to a good start, both in interviews and on social media.

Two-goal hero Mane told Liverpoolfc.com that the Reds had picked up the season where they left off their pre-season form, which bodes well for the games ahead.

“Sometimes it’s difficult to start the season but we started very well in pre-season, we won almost every game. We have started the season great and everybody is happy. We’re going to try to keep the same level and keep going.

“We played great football today, we created many chances. We defended as a team, compact, and tried to win every battle. We scored four goals and we deserved to win.

“The most important thing was the three points and we got them, so we’re very pleased.”

Mane wasn’t alone in hailing the manner of victory, with key midfielder James Milner also alluding to the fact it could have been a much tougher game.

He told the club website that the result showcased the quality of those in Red.

“It was a dangerous fixture.

“With the new signings they’ve made, they are a strong team, with a new manager who has got experience of winning the Premier League.

“So it wasn’t going to be easy but it says a lot about the boys and where we’re at. It was a tough pre-season and a good start. A few of the lads have not been back that long either.

“So it was pleasing; we can improve, we know that. But a few goals, a clean sheet at home and a win is pretty much the perfect start to the season.”

On social media, several of the key players from the match voiced their happiness at the win—as did all three debutants.

As well as the points, the Anfield atmosphere clearly made an impression, while the clean sheet didn’t go unnoticed either.

Great atmosphere today at anfield with a perfect Start in the premier League ??? ???? #XS23 #YNWA

?Great start to our @premierleague campaign, good result and a clean sheet! Now focus on next week #weareliverpool ??

The sizeable win puts Liverpool top of the opening Premier League table of the season, though of course it’s totally irrelevant after a single outing.

With a gap until next Monday to the Reds’ second match, those who returned late in pre-season will have an extended chance now to up their levels of fitness.

It’s a trip to London and Crystal Palace away on August 20, as Klopp’s team will look to build on a good start to the campaign.