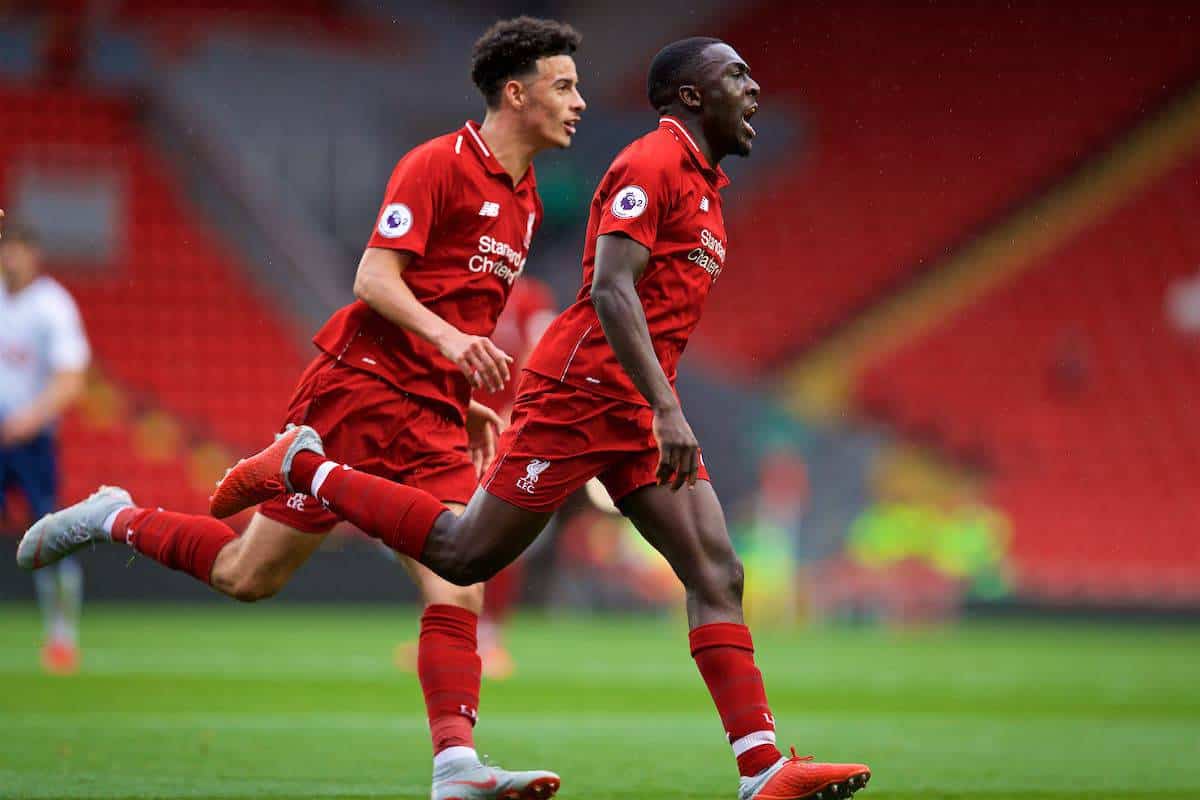 Liverpool U23s drew their third game in a row as Bobby Adekanye did everything but score the winner at Anfield, with the young Reds held 1-1 by Tottenham.

Plenty of scouts were on hand to witness this U23s clash between Liverpool and Spurs, with the transfer window still open across the rest of Europe, and Football League clubs still able to loan players.

If any one them were in attendance to keep tabs on Spurs centre-back Japhet Tanganga they will have been disappointed, as the England U19 international was sent off with just minutes played.

The early red card set the tone for this game which Liverpool went on to dominate, but they looked susceptible on the break as the visitors used the game as a good exercise in playing with a man less. 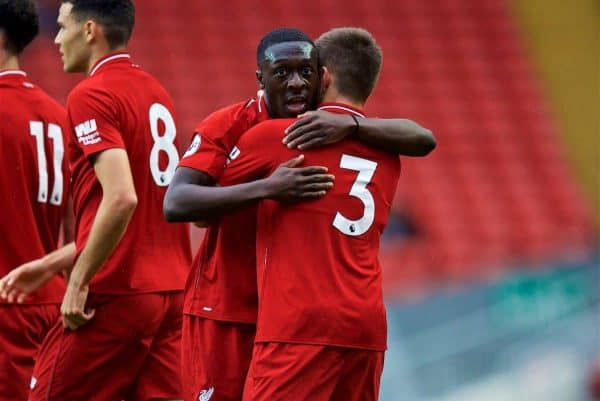 The trouble started for the away side when their goalkeeper, Alfie Whiteman, spilled a corner which had been forced by Curtis Jones‘ deflected shot.

The ball fell to Glen McAuley whose shot was handled on the line by Tanganga, who was sent off having prevented the goal.

Reds left-back Adam Lewis stepped up to take the penalty but blazed over the bar. It was an eventful start.

Adekanye looked lively on the right wing, eventually opening the scoring after missing a good chance earlier on.

He jinked inside and finished with his left foot, and though there was a pause as the referee and his assistant discussed a possible offside, the goal was eventually given. 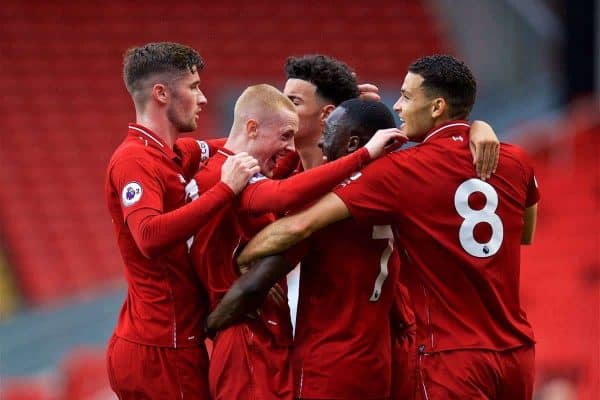 McAuley acted as the focal point, receiving the ball in traffic before laying on to one of his team-mates.

He was involved in one of the best moves of the first half as George Johnston played a ball into his feet from defence, the Irishman laid it off to Adekanye who then found Isaac Christie-Davies, but his shot was straight at the ‘keeper.

Despite having the extra man, Liverpool were caught on the counter by Marcus Edwards who skinned Lewis before powering low through the outstretched hands of Caoimhin Kelleher.

Adekanye shot just wide after a good run and pass from Christie-Davies, whose shirt was being pulled—but he used his strength and carried on regardless, creating a good chance as a result.

Liverpool’s liveliest player, Adekanye looked a threat every time he got on the ball.

Another of his shots trickled just wide of the far post having been deflected, and he was also able to win free-kicks in dangerous areas. 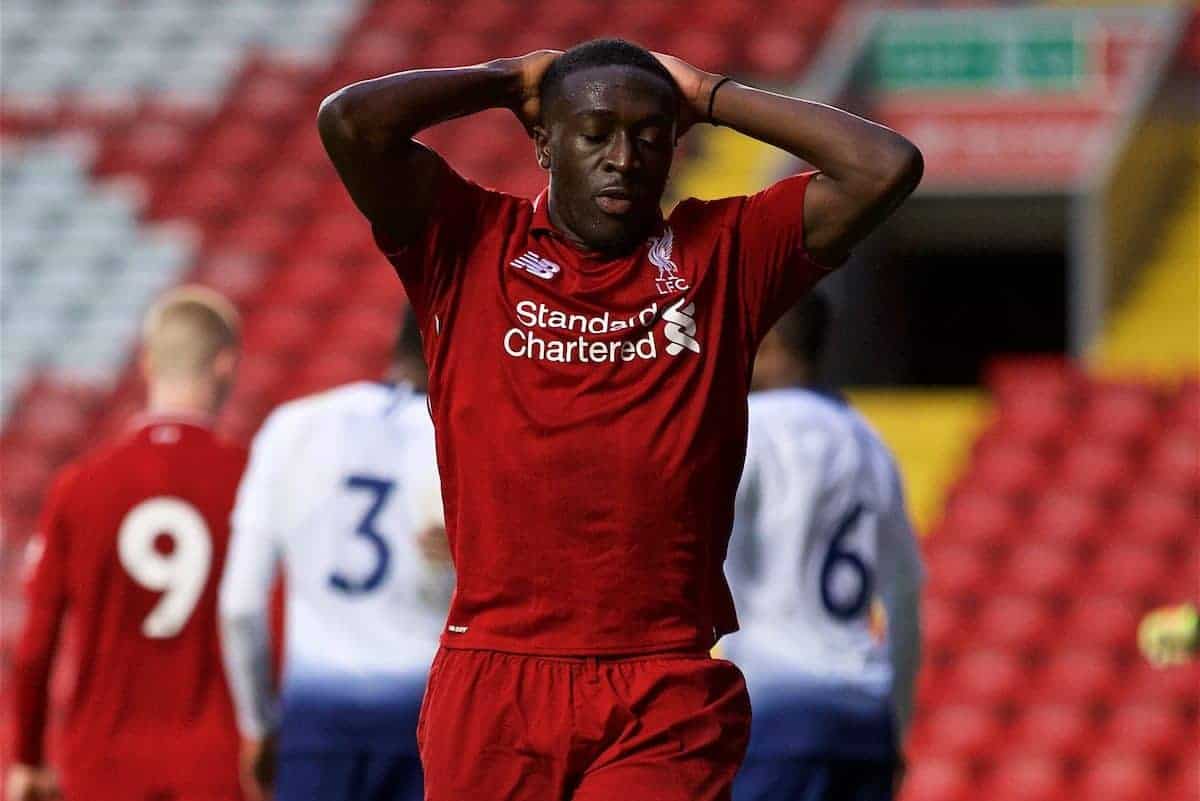 Edwards remained a threat, and almost caught the home side out on the counter again, but this time Kelleher, who had had little to do in the meantime, was up to the challenge.

But if Spurs’ right winger was a threat, then Liverpool’s was even more so.

With a bit more luck with his final ball or shot Adekanye would have won this game for Liverpool, giving them the result their dominance deserved.

He had his best chance of the game with three minutes to go, but was thwarted by Whiteman.

Nat Phillips, Liam Millar and Matty Virtue all had chances late on, but it wasn’t to be for the young Reds.