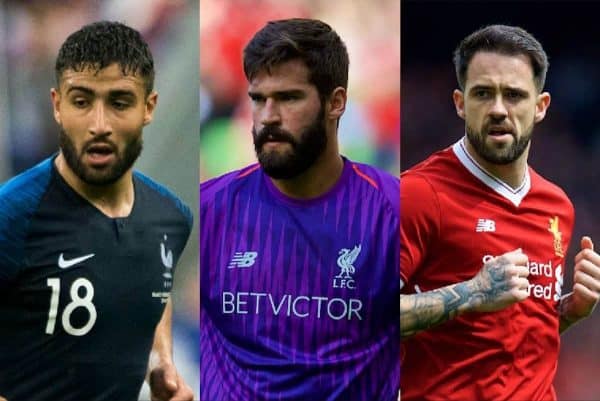 We round up the latest Liverpool news and transfer rumours on Monday, as the Reds prepare for their final pre-season game of the summer against Torino.

The longest-running transfer saga of the summer is now close to being over, one way or another.

Thursday’s deadline means we will finally see the end of the saga, although Liverpool have long-since said their interest is over anyway.

France’s World Cup winner returned to Lyon training on Monday after his summer holiday, although reports have now linked Chelsea with a move for the former Liverpool target.

Meanwhile, L’Equipe have claimed Fekir will sign a new deal with with the Ligue 1 club.

Praise For Alisson After Debut

Alisson impressed on his first appearance for Liverpool on Saturday and former Reds goalkeeper Bruce Grobbelaar believes he will help take Jurgen Klopp‘s side to the next level.

“Anyone who comes out of Brazil at a young age and comes over to Europe has got to have a big heart and a big personality,” he said.

“He has that in abundance and he will go from strength to strength in the Premier League. He’s a great buy—even at that money.”

Meanwhile, Andy Robertson echoed that sentiment after the win, saying: “I think we adapted to him quite easily.”

“He was very comfortable on the ball five minutes in and it meant we could show for it and he was starting most of our play, so it was a very good performance from him,” the Scot explained.

Danny Ings is seeking a move away from Liverpool this summer, with the striker expected to find a new challenge by the end of the transfer window.

Despite being linked with a move to Rafa Benitez’s Newcastle United, the Chronicle‘s chief writer Lee Ryder took to Twitter to say these claims are wide of the mark:

For all those asking about Ings there’s been no bid or approach for him. Focus has been on Rondon over the weekend. #nufc

Ings is running out of time if he wants to find a new club—it needs to get sorted in order for him to start the next chapter in his career.

Crystal Palace are among the sides interested and have been touted with a move worth up to £25 million for the 26-year-old.

Lazar Markovic probably wouldn’t have a Liverpool future even if he told Klopp he’d play for free.

The Serb’s exit seems inevitable now and it’s just a case of finding a club who he can finally secure a permanent move to.

Sporx claim that Anderlecht have made a move for the unwanted forward, potentially bringing an end to his Merseyside nightmare.

Markovic hasn’t made a first-team appearance for the Reds since May 2015.

Nathaniel Phillips has been one of the surprise success stories of Liverpool’s pre-season, performing excellently at centre-back.

The youngster has heaped praise on the influence of Virgil van Dijk, telling ESPN FC that he appreciates his guidance both on and off the pitch:

“Playing alongside Virgil [van Dijk] has helped me massively.

“He’s earned so much respect from his performances and you know he’s someone that you can trust—he knows what’s he talking about.

“As a centre-back you just want to learn from him because he’s at that level you aspire towards.

“And he’s friendly, he’s really approachable, which makes it 10 times easier because he’ll offer you advice and try to help you out.”

Phillips is learning from one of the very best.