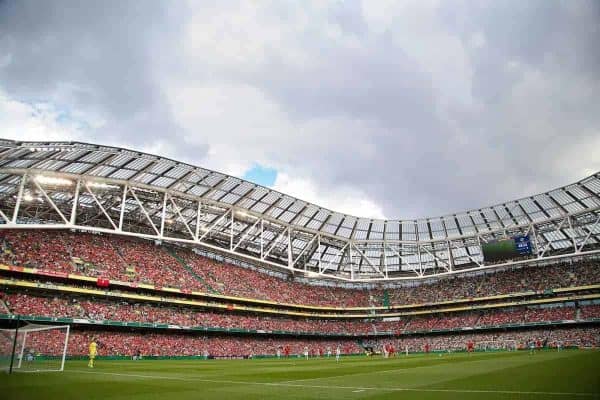 Here’s how to watch Liverpool vs. Napoli in their pre-season friendly on Saturday evening (6pm BST), live online and on TV around the world.

Following a successful tour of the United States that brought victories over Man City and Man United and an emphatic debut for Xherdan Shaqiri, the Reds headed to Evian for a training camp.

They spent a productive five days in the south of France, welcoming world-record goalkeeper signing Alisson to the fold alongside the returning Trent Alexander-Arnold and Roberto Firmino.

After that break, Jurgen Klopp‘s side are back in action with the penultimate friendly of the summer, as they take on Serie A counterparts Napoli at the Aviva Stadium.

This clash in Dublin will provide supporters with their first glimpse of Alisson in action in a Liverpool shirt, as Klopp continues to prepare for the season ahead.

But will the Reds claim another high-profile pre-season scalp in the form of Carlo Ancelotti’s Ciucciarelli?

Liverpool vs. Napoli is being shown live on LFCTV, which is available to live stream through LFCTV GO here.

Liverpool vs. Napoli is being shown live on LFCTV for viewers around the world, which is available to live stream through LFCTV GO here.

The Reds’ penultimate pre-season friendly can also be found on the following channels worldwide: