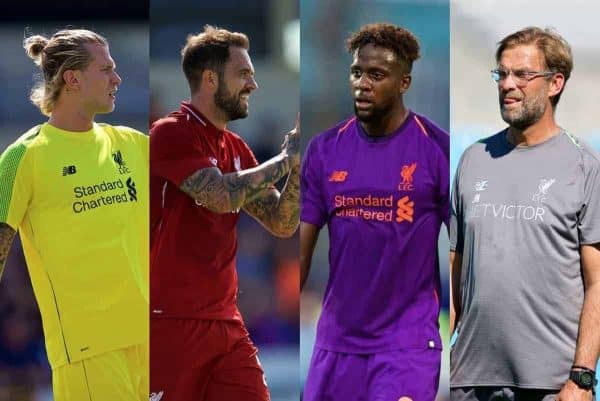 Clubs in the Premier League and Football League no longer able to sign players beyond August 9 at 5pm (BST), with a week left to complete further business.

Liverpool have already made four signings this summer, with Alisson, Fabinho, Naby Keita and Xherdan Shaqiri arriving at Anfield for a combined £170.5 million.

Danny Ward has made the £12.5 million move to Leicester City, while 10 players were released on the expiry of their contracts, including Emre Can, who joined Juventus on a free transfer.

With the window closing early this year after English clubs opted to reschedule deadline day to avoid further complications during the season, there is little time left for domestic business.

So what can we expect from Liverpool in the final week of the transfer window?

In Alisson, Fabinho, Keita and Shaqiri, Klopp has strengthened his squad significantly, with at least three of those four expected to take up key roles in his starting lineup.

A move for Nabil Fekir would have capped one of the best intakes on Merseyside in living memory, but issues with the Frenchman’s medical back in June saw Liverpool pull out of their £48.4 million agreement with Lyon.

This led to further speculation over a restructured deal after the World Cup, or the possibility of signing an alternative, with Borussia Dortmund’s Christian Pulisic the most recently touted.

But as it stands, it seems that Klopp’s insistence that the Reds won’t make any further signings is genuine, and no more high-profile arrivals are likely.

There could still be a surprise in the next week, with a move for Alex Oxlade-Chamberlain coming in the final days of the transfer window last summer, but there is no indication yet.

Liverpool could make further additions to their academy ranks, however, with Barnet goalkeeper Kai McKenzie-Lyle among those on trial this summer.

Given the size of Klopp’s squad and the additions made this summer, it was inevitable a host of young players and fringe figures would depart.

Ward’s move to Leicester came after a season spent as third choice behind Loris Karius and Simon Mignolet, while it was deemed beneficial for the likes of Ejaria, Woodburn and Wilson to gain first-team experience elsewhere.

They’re likely to be followed by another host of players, including Sheyi Ojo, with the club confirming their intentions to loan out the 21-year-old winger—although a sale is also possible.

Marko Grujic is widely expected to rejoin Cardiff City for another season, but there is also interest from Lazio and AC Milan in a permanent deal for the Serbian.

Academy talents including Connor Randall, Corey Whelan and Matty Virtue could also be sold or loaned out.

Lazar Markovic, Danny Ings and Divock Origi are due to be moved on, with a host of clubs around Europe interested in the trio as Liverpool aim to recoup a large portion of their transfer fees.

Crystal Palace are leading the race to sign Ings, with a remarkable deal worth up to £25 million mooted for the 26-year-old.

Pedro Chirivella is in line for an exit, though the midfielder has already turned down a £3.5 million move to Rosenborg, as he sets his sights on a move to an English or Spanish club.

Finally, both Karius and Mignolet have been touted to leave following the arrival of Alisson, though their futures could be resolved after the English transfer window closes.

The Rest of August

Though clubs in England will no longer be able to sign players beyond the evening of August 9, they are still able to sell to most foreign sides until August 31.

If Karius and Mignolet do both leave, it is most likely to be outside of the Premier League—though Fulham have been credited with an interest in the latter.

Following his nightmare in the Champions League final and Alisson‘s arrival as new first choice, Karius could benefit from a return to Germany, and he is on Bayer Leverkusen’s list of targets.

Meanwhile, both Besiktas and Barcelona are pursuing a deal for Mignolet, whose desire for first-team football could be tested if the latter make an approach.

Beyond that pair, there could be some unexpected departures for those not guaranteed a starting role.

Nathaniel Clyne, Ragnar Klavan, Alberto Moreno and even Georginio Wijnaldum could be included in that group, though they are unlikely to rock the boat unless concrete interest emerges.