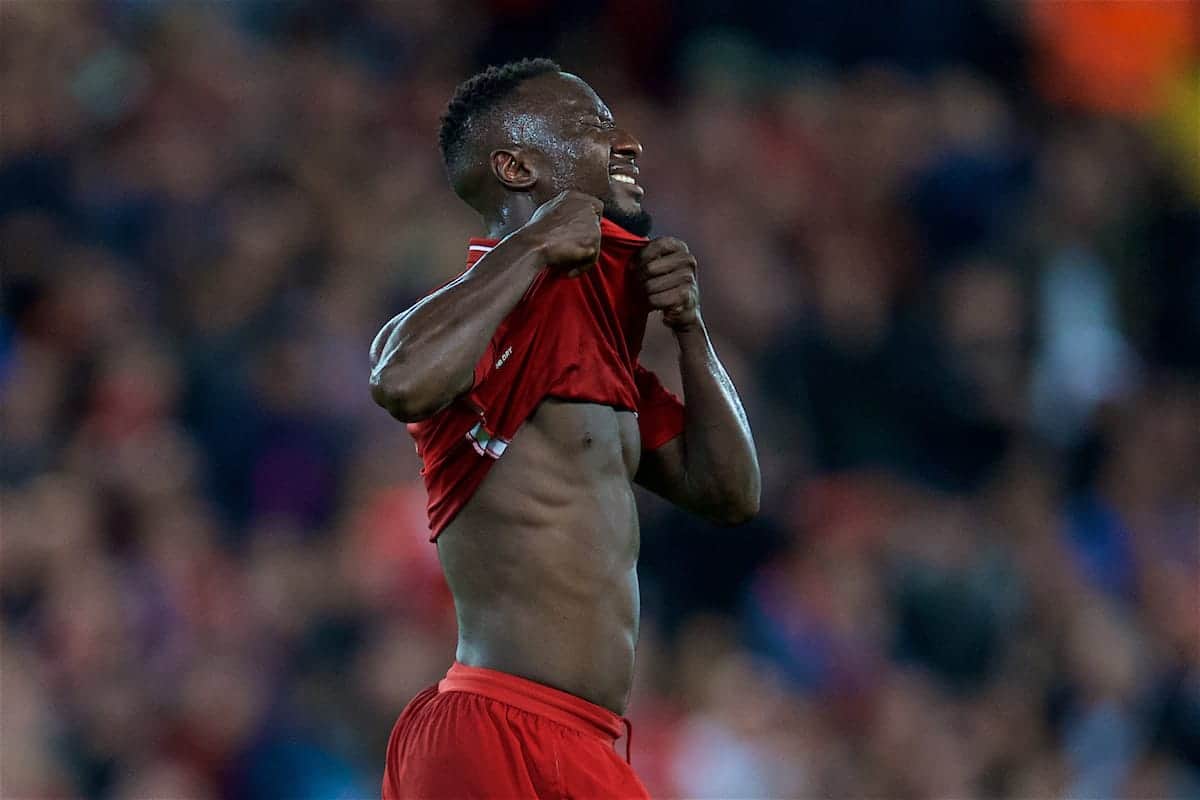 A much-changed Liverpool ended up crashing out of the League Cup thanks to a moment of brilliance by Eden Hazard, losing 2-1 at home to Chelsea.

Did well to deny Alvaro Morata in the first half what should have been a certain goal. No crazy moments that seemed to populate a majority of games when he was first choice.

Distribution also a marked improvement since he last took up his place between the Liverpool posts. Could do nothing about Hazard’s rocket.

Back in the starting lineup and facing Willian, not the ideal scenario when you’re out of match practice. However, dealt well with the threat from the Brazilian down his side.

Once Liverpool took the lead he was able to break forward more as the Reds took charge of the second half.

Needed stamp his authority all over this competition, it was probably the best opportunity he had for minutes on the pitch.

Carried on his good performance from the weekend against Southampton. Rarely threatened after the first 10 minutes and communicated well with Dejan Lovren.

Happy to drift forward when required and still had the legs to get back. Looks to have improved his positional play and also his situational awareness—which at times let him down last season. 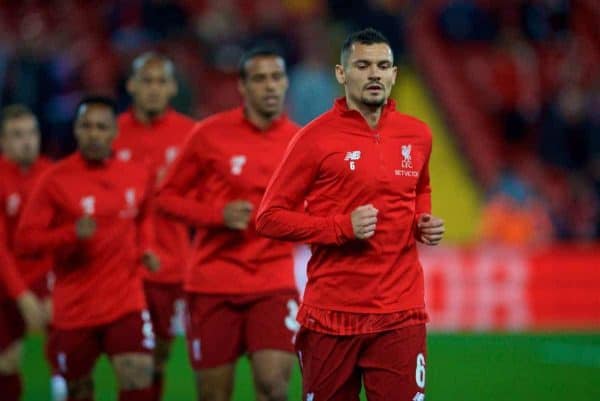 First game back after picking up an injury en route to the World Cup final.

Looked rusty early on, allowed Morata to get the wrong side of him, then moments later played the entire Chelsea attack onside when he took a moment to look around.

Probably a harsh opinion but just looks to have a mistake in him that is ready to come to the fore at exactly the wrong moment.

There’s a reason Andy Robertson starts every game normally. Moreno didn’t show anything that could suggest he could challenge for the left-back role.

Rash into challenges, eager to clear the ball (to no one) and easily skipped past for Chelsea‘s second due to his failure to read the situation.

However, grew into the game as the first half ended and, until the game was turned by Hazard, looked to comfortable supporting the attack.

Seems to be a confidence player—and when he didn’t have any he looked timid. Does look to be a way off from challenging for a consistent Premier League place in Liverpool’s midfield.

Captain for the night, looked tired as the game progressed. Was asked to step into the middle during the first half and his vision allowed the Reds to build some dangerous attacks.

Will probably need a rest during the next run of games, definitely before Man City come to town.

Supported the front three well initially and was unlucky not to score with a beautifully hit shot from the edge of the area.

Did look off the pace at times, could maybe have done better in the buildup to Chelsea‘s second. Needs to find the level of play that typified his first-season performance at RB Leipzig. 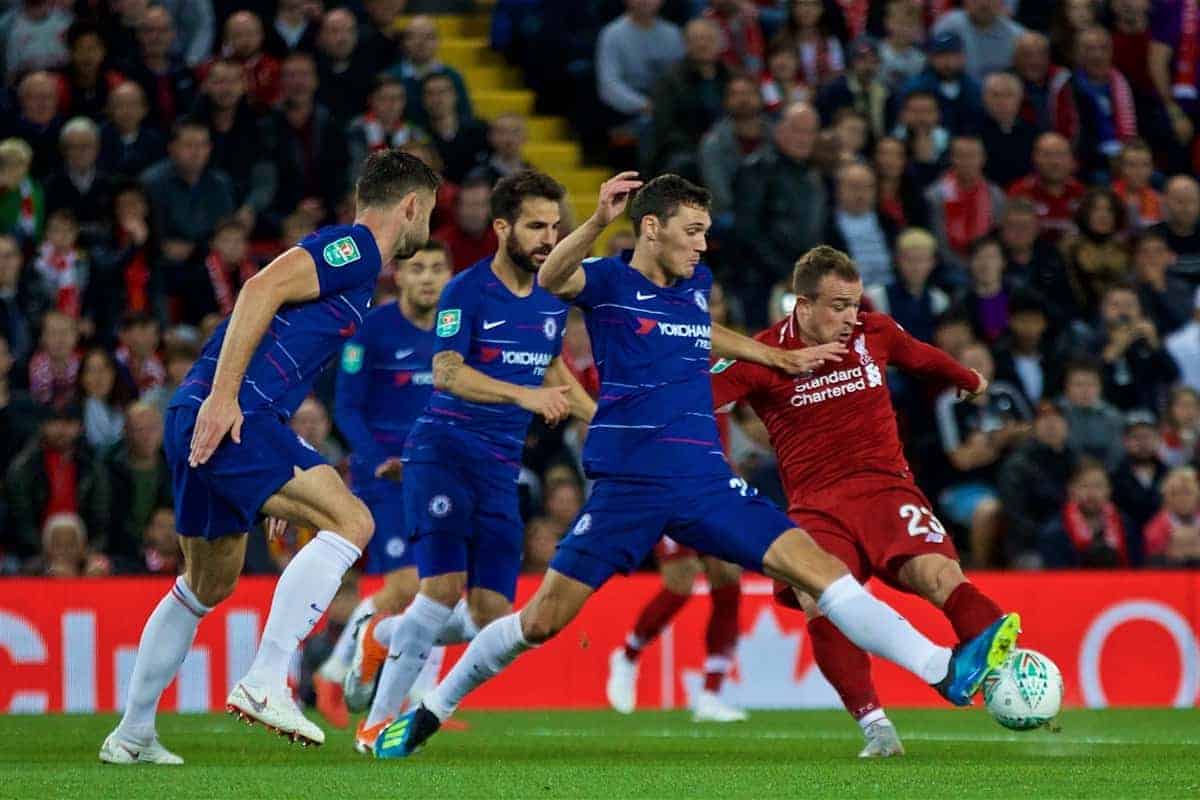 Liverpool’s best player on the night, and should have given Jurgen Klopp enough to show the manager he can be relied upon to change the game when needed.

Very dangerous on the attack and has the pace to frighten opposition defences. Should feature a lot more in the next few weeks as the fixtures come thick and fast.

In retrospect, he should have been rested. Notwithstanding this he did have a decent game on the whole.

Works a lot better with Mohamed Salah and Roberto Firmino but has the minutes under his belt that dictate a good striking relationship.

Unlucky not to get on the scoresheet in the second half, almost a poacher’s finish—nevermind. 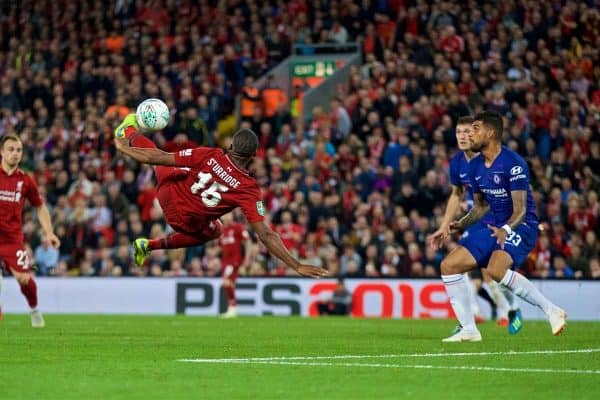 Missed an open goal, scored a great bicycle kick, then hit the bar. Showed ‘character’ to keep going after what was a howler of a miss.

Started centrally and did what was asked, tracked back well and also pressed to good effect when Liverpool were in the ascendancy.

Came on just as Liverpool peaked and Hazard purred. His absence during the first half was noticeable and it is to be expected he will start in the reverse fixture on Saturday.

Introduced to try and cement a victory, unfortunately wasn’t able to get into the game as Liverpool began to force and chase a game that ultimately slipped away.

Thrown on to try and score; had five minutes. Hard ask. 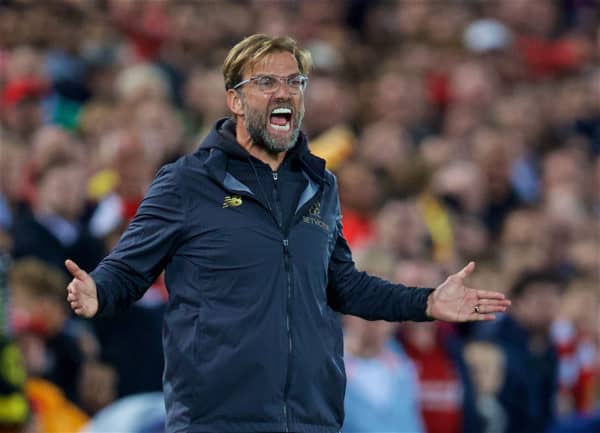 Had to rotate, no chance the regular starting XI can play three games in seven days. Tactically changed the shape during the first half as the side looked disjointed.

Made his substitutions at the right time, but Liverpool were undone by a piece of magic by Hazard—still the trophy hunt goes on.

Will be interesting to see how the fringe players are drip-fed into the lineup now Liverpool are down to three competitions to fight on.