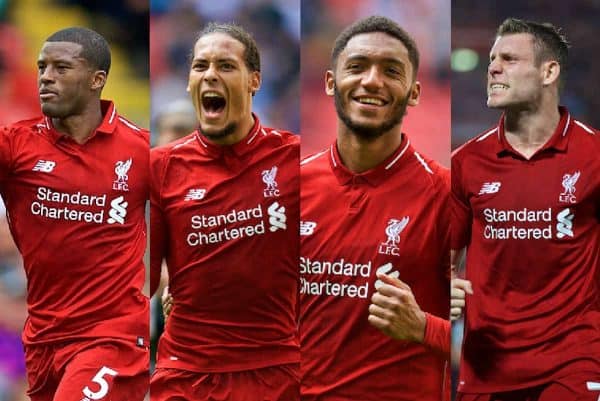 We round up the latest Liverpool news and transfer rumours on Tuesday, on the eve of the Reds’ League Cup third-round clash with Chelsea.

Liverpool have started the season in perfect fashion, but someone who is not resting on his laurels is Gini Wijnaldum.

Speaking to LiverpoolFC.com, the Dutchman says Man City are the perfect example of why the Reds need to keep on racking up the points:

“The Premier League is a really difficult competition and you don’t win games that easy.

“It doesn’t matter who you play against, it will always be tough if you are not concentrated. If you don’t give 100 percent you can lose every game so I am prepared for what can come or what can happen.

“If you speak about Man City, they had a phenomenal season last season and only lost two games and had four draws in the Premier League.

“They showed how few points you can drop to compete with them so it is going to be really difficult, especially if they have a season like that again.

“You can barely drop any points if they don’t again and that is difficult in the Premier League.”

Someone who spoken in glowing terms about the pair is Watford striker Troy Deeney, who told BBC Radio 5 Live about his admiration for them individually:

“I hate [Van Dijk]. Too big, too strong, too quick, too good on the ball. Always fighting. Good head of hair.

“One of them guys who sprays on his top, so he smells lovely.

“I’ve got massive respect for Joe Gomez. He could be England’s centre-half for the next 15 years. He’s a beast of a player.”

Van Dijk and Gomez certainly look a defensive pairing of huge potential—the hope is that they are mainstays in Liverpool’s back line for years to come.

ESPN FC report that Merseyside Police will meet with officials in Naples later this week, with regards to the safety of Liverpool fans for the Champions League clash at Napoli on October 3.

“Liverpool FC has a fantastic reputation in Europe—there were no issues with fans travelling abroad last year and I know that fans will want that to continue.

“While we understand and appreciate that many Liverpool fans will want to travel to Naples, I would continue to encourage fans who do not have tickets to not travel.

“Fans who are travelling with tickets are encouraged to monitor official fan advice on Liverpool Football Club’s official website and social media feeds for information to assist their visit.

And as ever, given the vigilance of police and security around the stadium, we would encourage fans to arrive in plenty of time to enjoy the atmosphere.”

Who Voted For Salah?

Mohamed Salah may have lost out to Luka Modric at the Best FIFA Football Awards on Monday, but the 26-year-old still received plenty of votes for Player of the Year.

A list has now been released showing exactly which three players each national captain and coach nominated for the prize, as well as members of the media.

The same applied to the captains of 13 other countries, including the forward’s Egypt colleague Essam El-Hadary and Northern Ireland and Southampton midfielder Steven Davis.

Unsurprisingly, he didn’t get Sergio Ramos’ vote—though no player nominated the Spaniard at all…

James Milner has made a magnificent start to the season, but it’s not just on the pitch where his standards have gone up immeasurably.

The 32-year-old has become famed for his dry sense of humour on social media and it came to the fore after Salah won the Puskas Award on Monday night—given for the best goal scored in the last 12 months (Everton at home last December).

No Injury Blow for Adekanye

Liverpool U23s winger Bobby Adekanye sparked major concerns as he was stretchered off the field late on in Friday night’s 4-0 defeat to Arsenal.

The Dutchman looked to have suffered a serious knee injury, left prone after a challenge with minimal contact, but those fears have now been allayed.

According to the Liverpool Echo‘s James Pearce, the 19-year-old is already back training, having avoided suspected ligament damage.

The U23s are next in action away to Chelsea on Saturday afternoon, in a fixture that mirrors that of the first team.

Manager Neil Critchley will consider this a significant boost, as Adekanye has been one of the few to stand out in a difficult start to the campaign for the young Reds.