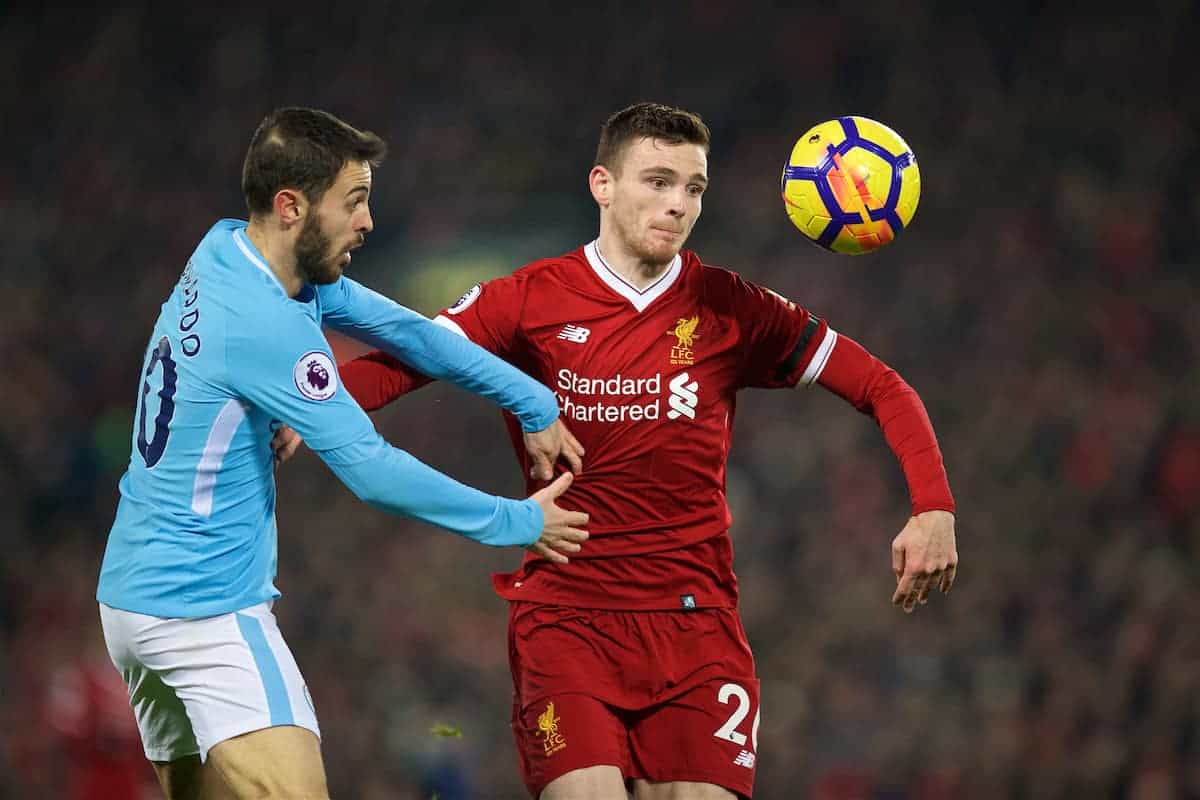 Liverpool and Man City face off in a massive Premier League game on Sunday, with Jurgen Klopp‘s side looking to return to the top of the table.

It doesn’t get much bigger than this for Liverpool in terms of their title credentials being tested.

A daunting seven-game run of fixtures will come to an end on Sunday evening and we will know a lot more about Klopp’s men come the final whistle.

It may only be early October, with many twists and turns still to come, but after Wednesday’s defeat in Naples a big response is needed.

City cruised to the Premier League title last season, racking up 100 points on their way to glory and setting the benchmark for their rivals.

Pep Guardiola’s team have matched the Reds’ total of 19 points from seven games in 2018/19, albeit with far easier fixtures. 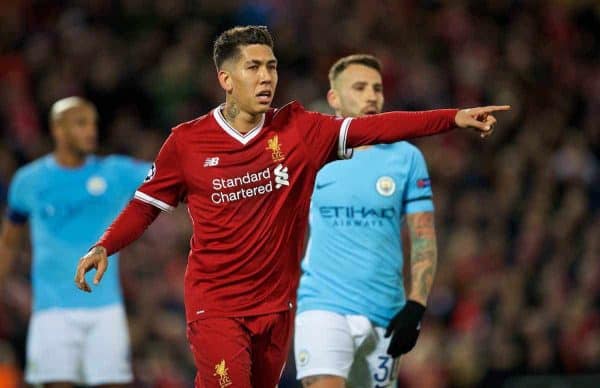 This is a matchup between two of Europe’s best sides, in a fixture that could dominate the English game over the next several years.

The Reds have had the better of their opponents in recent times, winning their last five meetings at Anfield, but this is a City team brimming with world-class talent seeking revenge after the Champions League quarter-final defeat in April.

Liverpool are well aware of the problems they can cause City, however, so there should be no reason to approach the game with too much caution.

Victory would be an outstanding way to head into the international break, going three points clear of the champions in the process ahead of an easier upcoming run. 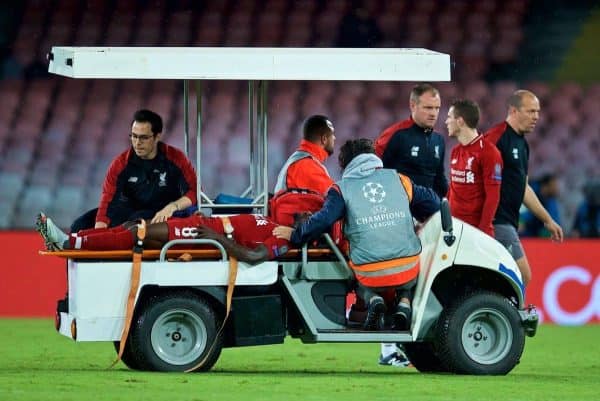 Naby Keita was taken to hospital after suffering a back problem against Napoli, although fears have been allayed over it being a serious injury.

The 23-year-old trained at Melwood on Friday but it would be a surprise if he started, with Jordan Henderson, Gini Wijnaldum and James Milner expected to make up the midfield.

Liverpool’s back line should remain the same, given the magnitude of the fixture, with Joe Gomez in particularly imperious form.

A little more is required from full-back pair Trent Alexander-Arnold and Andy Robertson, after a below-par spell.

Mohamed Salah is still off the boil in comparison to last season, but Klopp is likely to keep faith in him, rather than bringing in Xherdan Shaqiri. 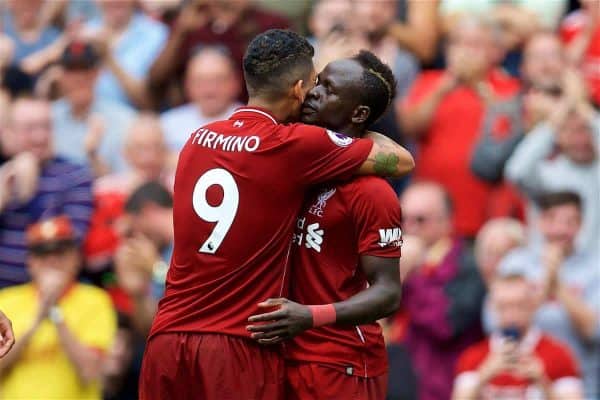 Sadio Mane and Roberto Firmino have also been a little off-colour of late by their high standards, but should again be named in the starting lineup.

The Reds still have Alex Oxlade-Chamberlain (knee) and Rhian Brewster (knee) out injured, but Adam Lallana is back in full training.

Guardiola is without Fabian Delph, but key duo Benjamin Mendy and Kevin De Bruyne could play a part having recovered for respective lengthy injuries.

There are question marks over the fitness of Ilkay Gundogan, while goalkeeper Claudio Bravo is a long-term absentee.

Last 5 at Home to Man City 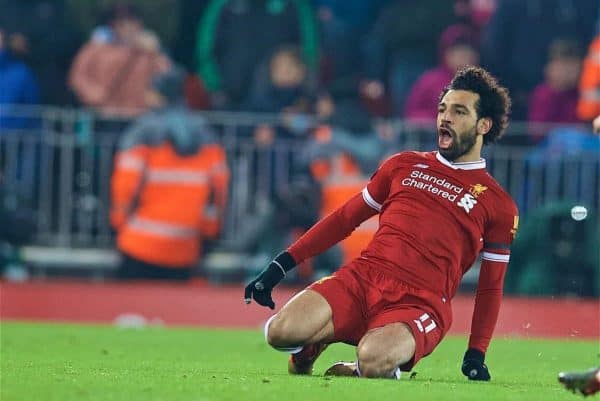 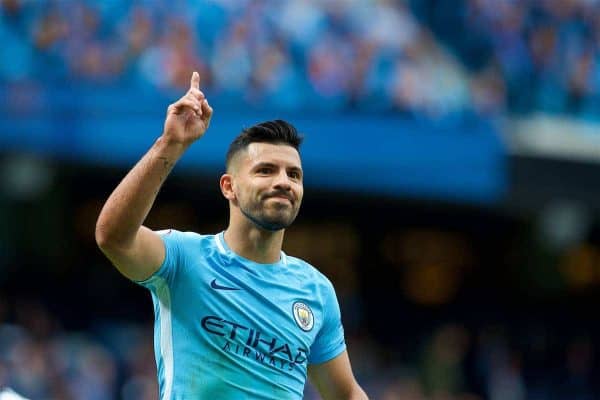 Aguero has been a thorn in Liverpool’s side at the Etihad Stadium, scoring in all six games against them until failing to in the Reds’ 2-1 Champions League victory in April.

The Argentine striker has never found the net at Anfield in nine appearances for City and Atletico Madrid, however, incredibly managing just three shots on target in that time.

Let’s hope that statistic stays the same this weekend. 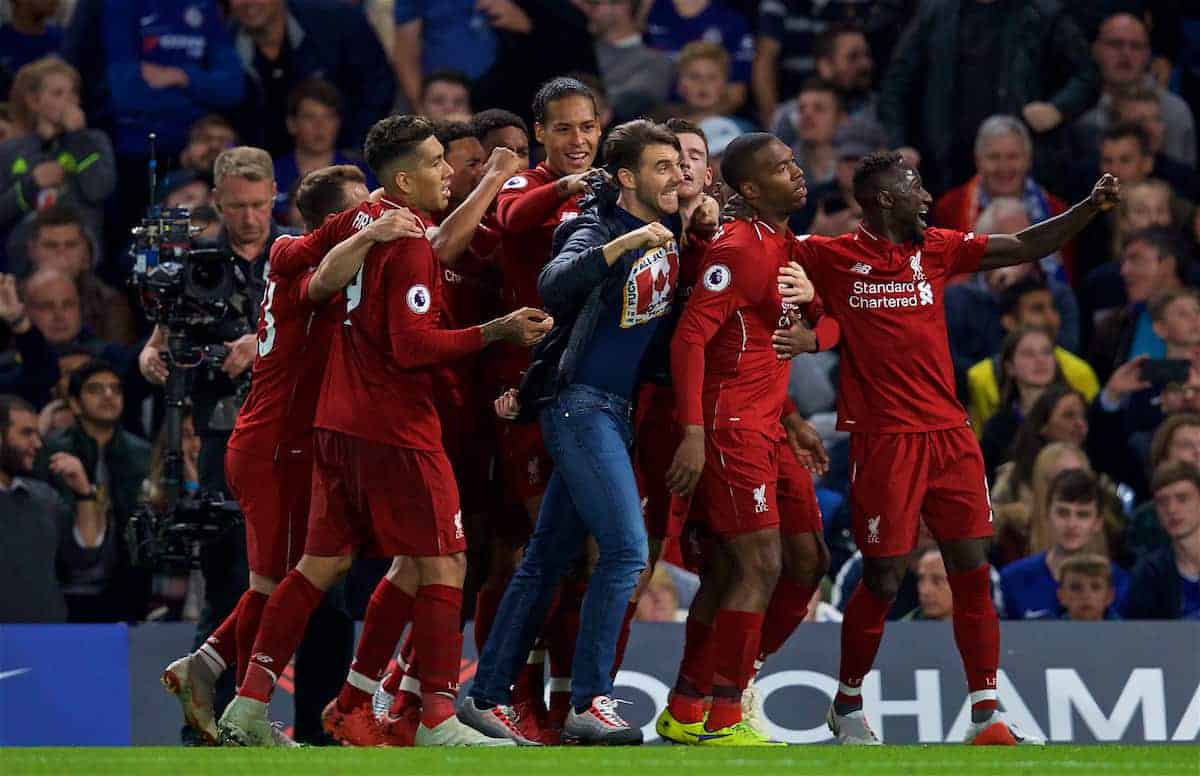 Speaking in his pre-match press conference on Friday, Klopp spoke refreshingly about his preference for playing entertaining football:

“The most important job of football is entertaining the people.

“It’s only football. We don’t save lives, we don’t plant anything, create anything, are not good in surgeries.

“We only play football, so if we don’t entertain the people why would we play then?

“It’s not always possible, but it’s a really important thing. That’s why we have to try to create constantly, or as often as possible.

“Pep’s team are the best at that. I can admit that easily because its so obvious.”

Unsurprisingly, the match is live on Sky Sports Main Event, and finishes off the weekend Premier League action in style.

Chris Williams is in charge of This is Anfield’s live blog, with great content and minute-by-minute updates from 3.45pm.