A player who caught Steven Gerrard’s eye while at the Liverpool academy, Herbie Kane is now impressing as the club’s surprise success story of 2018.

When Gerrard returned to Kirkby to earn his UEFA ‘B’ Licence, he made sure two players were in his group of U18s for every session: Kane and Trent Alexander-Arnold.

But while Alexander-Arnold’s rise to a first-choice role under Jurgen Klopp has been well documented and romanticised, Kane’s development has been steadier, more realistic even. 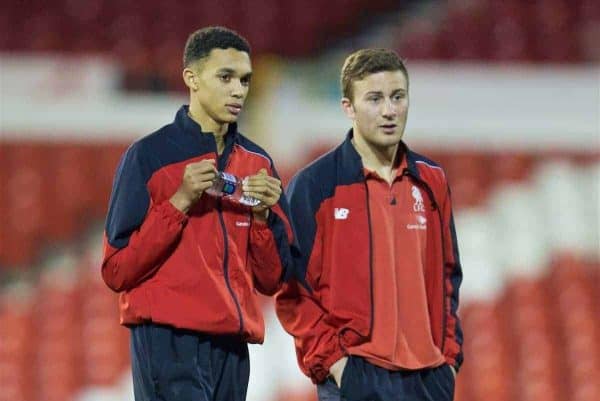 This came as another setback in a series of setbacks for the former Bristol City midfielder—something which stalled his progress to the extent that only this year brought his first loan move.

Kane, at 19, joined Doncaster Rovers on an initial five-month loan in August, with the Doncaster Free Press’ Liam Hoden telling This is Anfield it was “very much a case of Herbie who?” for supporters at the time.

“That’s understandable if you don’t possess a good knowledge of U23 football,” he explained.

“But we knew he must have had something about him because Rovers were well stocked in the midfield areas and didn’t particularly need to make an addition in there.”

Kane had been named on the long-list for the European Golden Boy award in June, and regularly trained with Klopp’s first-team squad as well as captaining the U23s in the second half of 2017/18, so he certainly did have something about him.

But he remained something of an unknown quantity, a staple for Liverpool’s academy sides, but not boasting the reputation of the likes of Ovie Ejaria, Ben Woodburn and Harry Wilson.

“It was an important decision for me as it’s my first loan spell, I know I’ll have to work hard to earn my place in the team,” Kane told Doncaster’s official website on clinching his move.

“I’m a hardworking player, I like to score and assist as much as possible. There is plenty of competition for places which I’m excited by.”

The teenager clearly didn’t expect to take up as prominent a role as he did, as after warming the bench throughout the first game of the season, he was thrown in at the deep end against Wycombe Wanderers.

Deployed in a roving role in midfield, Kane ultimately set up Doncaster’s opener, laying on the final pass on the overlap in a one-touch move that saw Mallik Wilks fire home.

Doncaster won that game 3-0, with Kane playing the full 90 minutes, repeating the feat just three days later in a 2-1 win at Scunthorpe in the League Cup.

His performances have endeared him to Hoden who, watching on at every Doncaster game, has grown increasingly captivated by his maturity, composure and tenacity off the ball:

“He came to Rovers without a single minute of senior football and within 10 minutes of his debut you could see how special he was.

“He doesn’t look like a young kid in his stature on the pitch and he doesn’t play like one either.

“During that debut he was seen reprimanding captain Tommy Rowe for not taking up space.

“Kane is unbelievably composed both on and off the ball. His range of passing is excellent, his movement is superb and he has plenty of confidence in his ability to get forward.

“His touch is very good and he can get out of a tight spot.

“But he’s equally adept when the opposition have the ball. He breaks up play superbly and gets Rovers going back in the right direction quickly.

“He covered as the deepest-lying midfielder for one game due to suspension but bossed the midfield.

“Even in his least impressive performance he was Rovers’ best player on a bad day for the side.”

This is high praise for a player who, as Hoden notes, had only played academy football prior to his switch to South Yorkshire, and had been tasked with keeping up in a physically demanding league.

Despite the likes of Jordan Houghton and Rodney Kongolo arriving on loan to bolster Rovers’ midfield in recent seasons, Hoden describes Kane as “quite comfortably the best” to do so.

Doncaster manager Grant McCann, himself a midfielder during a lengthy playing career that took in spells with Cheltenham, Scunthorpe and Peterborough, believes Kane’s upbringing has aided this.

“I knew he’d come from a tough background in Bristol and that he was ready to come into the Football League because he’s physically ready,” he told the Free Press.

“What he probably surprised us with is how good he is in possession and breaking up play.

“In youth football there’s no real emphasis, in my opinion, on winning the ball back.

“Coming from a team like Liverpool there is. That counter-pressing and reaction, he’s proved he’s the best in this league at it.”

It was noted in September that Kane was averaging the most ‘deep progressions’—described as “passes, dribbles and carries into the opposition final third”—per 90 minutes in League One (9.8):

*(Passes, dribbles and carries into the opposition final third per 90 minutes) pic.twitter.com/ctof1Ir5uk

Kane’s all-action style had already been showcased with the U18s and U23s at Liverpool, but now he is translating that onto the first-team stage, with McCann’s reference of counter-pressing deliberate.

Doncaster’s No. 15 has already earned Man of the Match awards for his displays against Burton Albion, Portsmouth, Accrington Stanley and Sunderland, while Hoden labelled him “the major driving force” behind the 3-2 win at Plymouth Argyle.

It is, therefore, noteworthy that Kane’s current deal with Rovers expires in January—a reality he and McCann both want to change in the near future.

Speaking to BBC Radio Sheffield in October, the midfielder explained how he is in regular contact with Liverpool, and is hoping to earn a long-term stay at Anfield by aiding Doncaster’s promotion push.

Since the season opener, Kane has so far missed just one League One game through suspension, starting 14 and playing the full 90 in 10; he has made 17 appearances in total, laying on three assists.

Of Liverpool’s 16 loanees, only Ejaria (1,452) and Ryan Kent (1,440) have enjoyed more minutes on the pitch this season than Kane (1,431), having begun the season with Rangers two weeks before him.

It could be argued that, on current form, he could attract attention from further up the Football League at the start of next year.

But in Hoden’s eyes, staying with Doncaster until May, playing regularly and honing his craft, would be a wiser decision, particularly if he has ambitions of settling under Klopp at Liverpool.

“I’d be fully confident of him being a Premier League footballer in a few years but it doesn’t happen overnight for many his age,” Hoden proffered.

“He’s getting wonderful experience right now and it should only be good for him to keep playing games.”

It is difficult to argue with that, and if his surprise success at the Keepmoat continues he could join the likes of Wilson, Woodburn and Marko Grujic as one of the loanees firmly on Klopp’s radar.