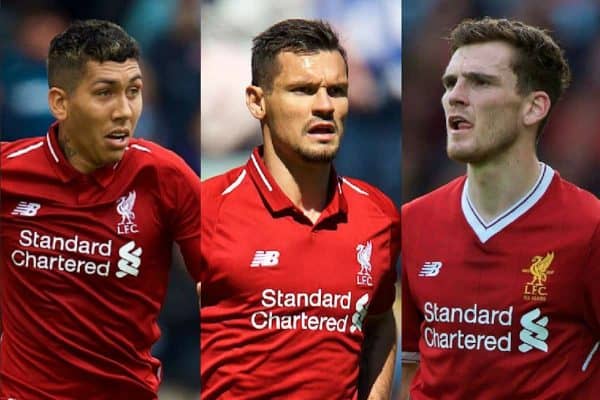 We round up Tuesday’s LFC news and rumours, as the lack of interesting football sees some silly season-style speculation in foreign media!

Liverpool often feel cursed when it comes to players getting injured on international duty and this time around has been no different.

Mohamed Salah and Sadio Mane have already both picked up respective problems – Virgil van Dijk is also still struggling with a rib problem – and now Naby Keita can seemingly join the list.

The 23-year-old limped out of Guinea’s clash with Rwanda on Tuesday and had to be helped from the field by a teammate.

Early reports from Guinea suggest it is a thigh injury for the midfielder, but there’s no word on how serious it is. Hopefully it’s more similar to Salah’s and it’s only a minor muscle strain.

Roberto Firmino has matured into one of the world’s most effective strikers in the last 12 months, epitomising this Liverpool side with his creativity, work-rate and team ethic.

In a piece of news that will definitely need to be taken with a pinch of salt, Spanish journalist Eduardo Inda, from Ok Diario, claims the Brazilian will be the subject of a bid from Barcelona next summer:

“I already said that Luis Suarez is seen increasingly stubborn and they are considering doing the same operation as Coutinho.

“But I guess at the end of the season, not halfway through.”

Not much to see here, Liverpool won’t even consider letting Firmino go.

Lovren Also Off To Catalan Giants?

According to Mundo Deportivo, Barcelona are monitoring Dejan Lovren as a possible signing in January, with World Cup winner Samuel Umtiti potentially sidelined for months with a knee injury.

Tottenham‘s Toby Alderweireld is seen as another option, as the La Liga heavyweights look to cover for the French centre-back’s likely long-term absence.

This is a move that feels very unlikely, even though Lovren’s head may be turned, having lost his place in Liverpool’s ‘best’ XI to Joe Gomez.

At 29, Liverpool would get big money for the player before his value dips.

A tough week for all of us, but we all need to stick together! Luckily we don’t have long to wait until we can hopefully put it right! Looking forward to getting back to business with @liverpoolfc ????????

It has been a tough international break for Andy Robertson, who captained Scotland to back-to-back defeats against Israel and Portugal.

The left-back took to Instagram on Tuesday to admit it hasn’t been an easy time, but is excited about linking up with his Reds teammates again:

“A tough week for all of us, but we all need to stick together!

“Luckily we don’t have long to wait until we can hopefully put it right! Looking forward to getting back to business with @liverpoolfc”.

Robertson is sure to slot straight back into the team for Saturday’s trip to Huddersfield Town, amid news that Alberto Moreno is likely to leave next summer, with Adam Lewis being promoted to the first-team squad.

Lorenzo Insigne inflicted Liverpool’s first European defeat of the season a fortnight ago, scoring for Napoli in the dying moments to earn them a 1-0 victory.

The diminutive forward is one of Europe’s deadliest attacking players and some reports claim the Reds are interested in signing the 27-year-old Italian.

That’s according to Rai Sport, who believe Liverpool will “do battle” with Chelsea for his signature.

The Italy international still has four years left on his current contract, so a huge free would be required to prise him away from his boyhood club.

Insigne would be a superb buy, but is he really needed, considering the quality already on show at Anfield? Probably not.