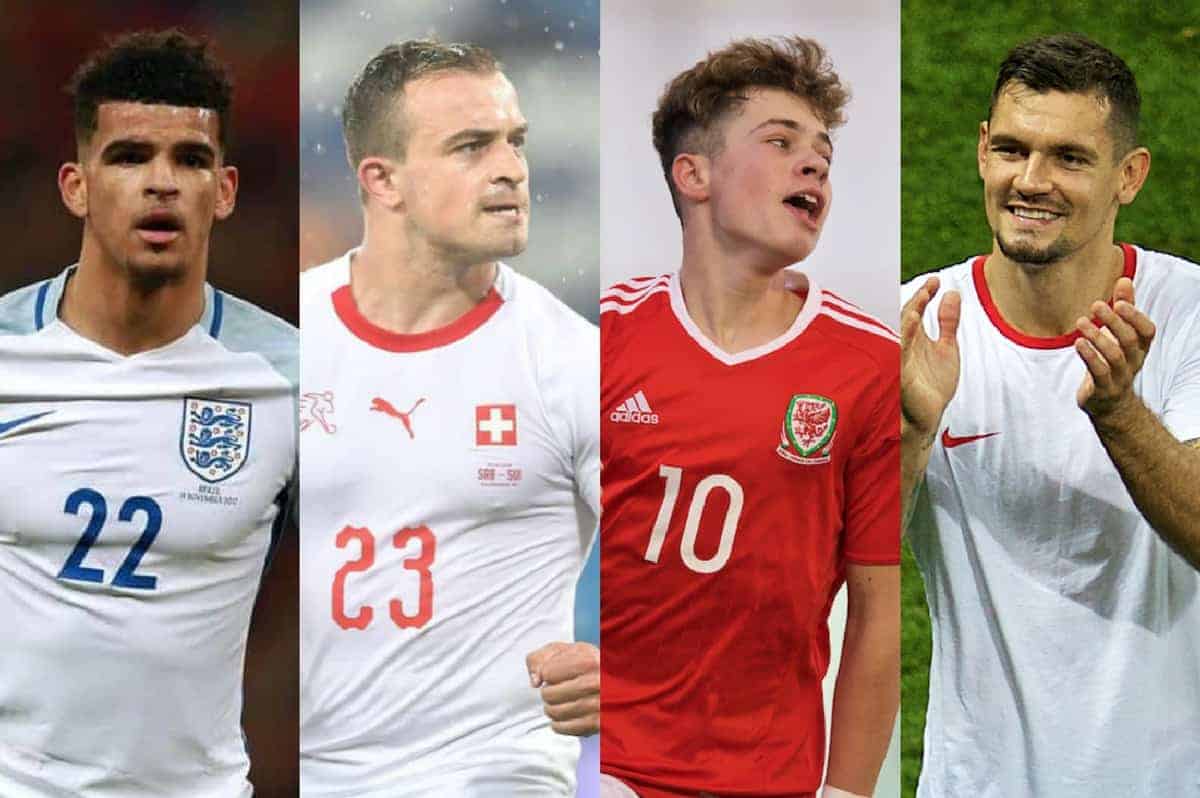 Liverpool had 10 players in action over the first two days of the November international break, with Dom Solanke among three of those on the scoresheet.

The Reds have 31 representatives on duty this month, with Kai McKenzie-Lyle the last to receive a call-up as he joined the Guyana squad on Tuesday.

Wednesday and Thursday were busy days, with a host of youngsters aiming for a place at the U19 Euros, while UEFA Nations League clashes and friendlies also played out.

Xherdan Shaqiri was among those to take to the field in the first day, though his half-time introduction was not enough to keep Switzerland from a shock 1-0 defeat to Qatar.

Most encouraging is that Vladimir Petkovic opted to rest the attacking midfielder at the start, after Jurgen Klopp remarked that he had played the full 90 minutes in both games in October.

Rafa Camacho started on the left wing as the Portugal U19s won 1-0 over Germany in their first game in a friendly tournament in Armenia, playing 81 minutes in a fairly lethargic game all round.

Both Neco Williams and Morgan Boyes were in the starting lineup as the Wales U19s took on Scotland in their U19 Euro qualifier in Rhyl.

Williams, driving up the right flank, scored for the Young Dragons, but the away side ultimately sealed a 2-1 win, with Liverpool U18s centre-back Tom Clayton watching on from the bench.

And Edvard Tagseth, a hugely promising midfielder, played the full 90 minutes as the Denmark U18s held Spain to a 0-0 friendly draw.

Thursday saw Dominic Solanke start as the England U21s took on Italy in Ferrara, and the 21-year-old took out his frustrations at club level with an excellent brace in a 2-1 victory.

His first was a brilliant header from inside the six-yard box after great work down the left from Jay Dasilva and Ryan Sessegnon.

And his second was a composed volley from a similar position to ensure the win after Moise Kean’s equaliser, serving as a reminder to Klopp having yet to feature for the first team this season.

Solanke has now scored five goals in 454 minutes of football for the Liverpool U23s and England U21s this season, or one every 90.8 minutes.

Curtis Jones was also in action for England with the U18s on Thursday, playing 82 minutes in a 2-2 draw with the Netherlands.

Trent Alexander-Arnold reached another milestone as he scored his first senior international goal for England in the 3-0 friendly win over the United States.

The 20-year-old was named Man of the Match in a comfortable game that also saw Jordan Henderson brought on for the final 32 minutes, but Joe Gomez was left out as a precaution.

Taking to Instagram after the game, Alexander-Arnold described his outside-of-the-boot effort as a “childhood dream: [to] score at Wembley for England.”

England’s opponents on Sunday are Croatia, and Dejan Lovren played the full 90 minutes as they kept up the ‘pressure’ in their UEFA Nations League group with a dramatic 3-2 win over Spain.

Finally, both Simon Mignolet and Caoimhin Kelleher were unused substitutes for Belgium and the Republic of Ireland, with the latter denied his senior debut.

There are a clutch of must-see games on Friday, with Alisson, Fabinho and Roberto Firmino among those involved as Brazil play Uruguay at the Emirates in north London.

Virgil van Dijk and Gini Wijnaldum are both likely to start as the Netherlands host France, as is Mohamed Salah in Egypt’s Africa Cup of Nations qualifier at home to Tunisia.

With Wales taking on Denmark in the UEFA Nations League, Harry Wilson and Ben Woodburn will be both hoping to start, as will Kamil Grabara as the Poland U21s play the first leg of their U21 Euro play-off qualifier against Portugal.

Viteslav Jaros could also start in the Czech Republic U18s’ friendly trip to Italy, kicking off at 11am (GMT).