Three Liverpool loanees can seal their places in the third round of the FA Cup this weekend, with eight others also set for action with their temporary clubs.

The Reds’ relentless winter run continues on Sunday as they host Everton in the Merseyside derby, aiming for a swift recovery from their 2-1 loss to PSG in the Champions League.

All eyes will be on Anfield as Jurgen Klopp‘s side look to keep up the pace at the top of the Premier League, but some intriguing storylines play out elsewhere too.

Most notably, Herbie Kane and Doncaster Rovers set their sights on FA Cup success as they take on Charlton Athletic in the second round on Saturday.

Kane has been in sensational form for the Dons so far this season, and particularly in recent weeks, with the midfielder scoring five goals in his last five games for the club.

He netted the opener in Tuesday night’s 2-0 win over Blackpool, while a shot saved led to Rovers’ second through John Marquis and he also hit the crossbar from a free-kick.

Speaking to the Doncaster Free Press after the game, Rovers manager Grant McCann suggested only contract talks with Liverpool were keeping Kane from extending his stay at the Keepmoat, with his belief being “they’re quite close.”

Shamal George could also turn out for Tranmere Rovers in the FA Cup as they take on Southport, while Connor Randall can hope for a second appearance after recovering from a fractured cheek as Rochdale host Portsmouth.

North of the border, Steven Gerrard’s Rangers can take advantage of Celtic being in the Scottish League Cup final, with a chance to leapfrog them to pole position in the Premiership.

Liverpool winger Ryan Kent is not set to feature, with his return from a hamstring injury not expected until next week, but Ovie Ejaria can hope to return to the side after remaining on the bench against Villarreal.

Rangers face Hearts in Edinburgh in a lunchtime kickoff on Sunday, three hours before the final at Hampden Park, with victory putting them a point ahead of their Glasgow rivals, albeit having played a game more.

If they lose, Hearts will take their place in second, with the competition at the top of the table increasing due to their strong start to the campaign, along with Kilmarnock and St Johnstone. 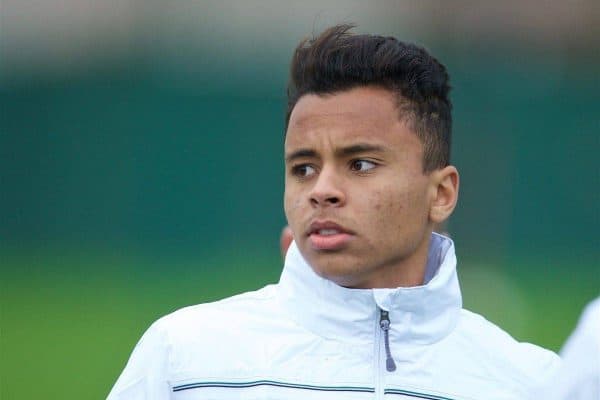 Disappointingly, another loanee has returned to Melwood this week to undergo rehabilitation, after Allan Rodrigues sustained knee ligament damage in training with Eintracht Frankfurt.

The Brazilian is set to miss the next six weeks, keeping him out until after the Bundesliga’s winter break, which will only further damage his prospects of securing a UK work permit.

Allan has made just four appearances for Frankfurt so far this season, of which only two were starts, with his last outing coming over a month ago on October 28.

Having been left out of Adi Hutter’s squad for the Europa League, and with Frankfurt already out of the DFB-Pokal, Allan may only have 17 more opportunities between now and the end of the season.

Therefore it is very unlikely he qualifies to play in England next term.

Taiwo Awoniyi kicks off the weekend’s action for the Liverpool loanees, as KAA Gent take on Lokeren on Friday night, though the Nigerian is still yet to start under new manager Jess Thorup.

On Saturday, Ben Woodburn‘s exile at Sheffield United is likely to continue ahead of a proposed return to Merseyside in January, but Harry Wilson can further enhance his reputation as Derby take on Swansea.

And both Loris Karius and Sheyi Ojo face high-profile opposition as Besiktas take on Galatasaray in an Istanbul derby and Stade de Reims play Marseille.

Karius endured a night to forget despite Besiktas’ 3-2 comeback win at Sarpsborg on Thursday night, however, with a series of errors sparking criticism of his role.