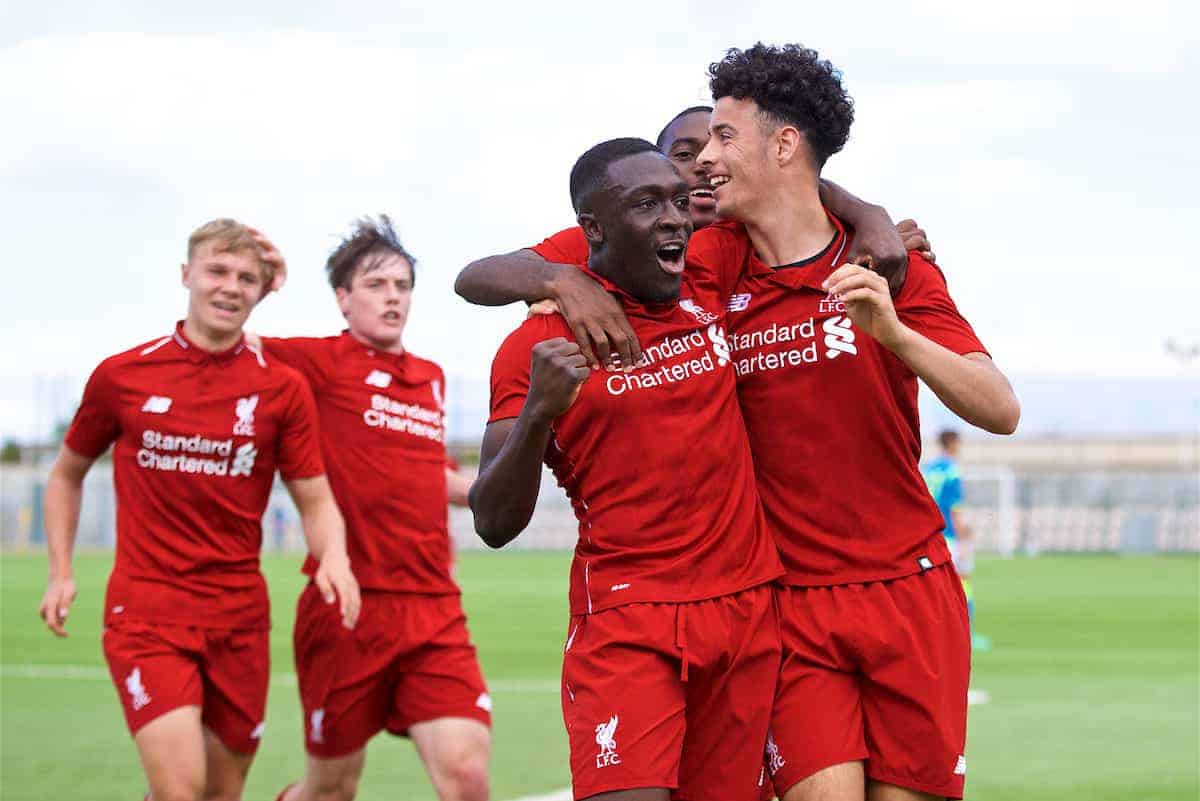 The Liverpool U19s take on Paris Saint-Germain in their fifth group game in the UEFA Youth League knowing victory would secure progress to the last 16.

Barry Lewtas‘ young Reds all but sealed their place in the knockout stages with a 2-0 win at Red Star last time out, but will still want to avoid the playoffs.

They head into their Wednesday afternoon clash with PSG sitting top of Group C, unbeaten after four games, with 10 points from three wins and a draw so far.

A point in Paris would leave it down to the final round of games to determine whether they or their midweek hosts progress automatically, ensuring victory is paramount this time around.

Liverpool boast both the most goals scored (10) and the fewest conceded (four) in their group, with the majority of those coming in a 5-2 thrashing of PSG in their previous meeting in St Helens.

And with Lewtas’ U18s seeing their nine-game winning run end with a 2-1 defeat to Derby last time out, there is clear motivation to take the fight to PSG.

The majority of those to turn out at the Stade Municipal Georges Lefevre will be from Lewtas’ core squad, along with familiar faces in the form of captain Adam Lewis and Bobby Adekanye.

Rafa Camacho—an ever-present so far in the UEFA Youth League—will not feature, having been included in Jurgen Klopp‘s first-team squad for the Champions League.

There are doubts over the involvement of Curtis Jones, too, with the 17-year-old suffering from a minor hamstring injury.

But Lewis and Adekanye should both take to the field, having also started all four games so far for the U19s along with Vitezslav Jaros, Rhys Williams, Tom Clayton, Neco Williams and Jake Cain.

Paul Glatzel and Bobby Duncan, the U18s’ outstanding strike partnership, have shared duties up front in a 4-3-3, while Liam Coyle has also been a regular, starting three of four games.

Another big opportunity could come for 16-year-old defender Ki-Jana Hoever, after a landmark week that saw him debut for the U23s in the 7-0 loss to Villarreal and then keep his place for the 1-0 win over Everton.

And Lewis, in an interview with LiverpoolFC.com, heaped praise on the summer arrival from Ajax.

“Ki-Jana has been excellent and I’ve been very impressed with him, especially as a young lad coming to a different country, it’s not easy,” he explained.

Hoever, who can operate all across the defence, is yet to start in the UEFA Youth League, but could do so if Lewis is required in midfield.

On the trip to PSG, Lewis added: “We are looking forward to it and hopefully we can get through to the knockout stages.”