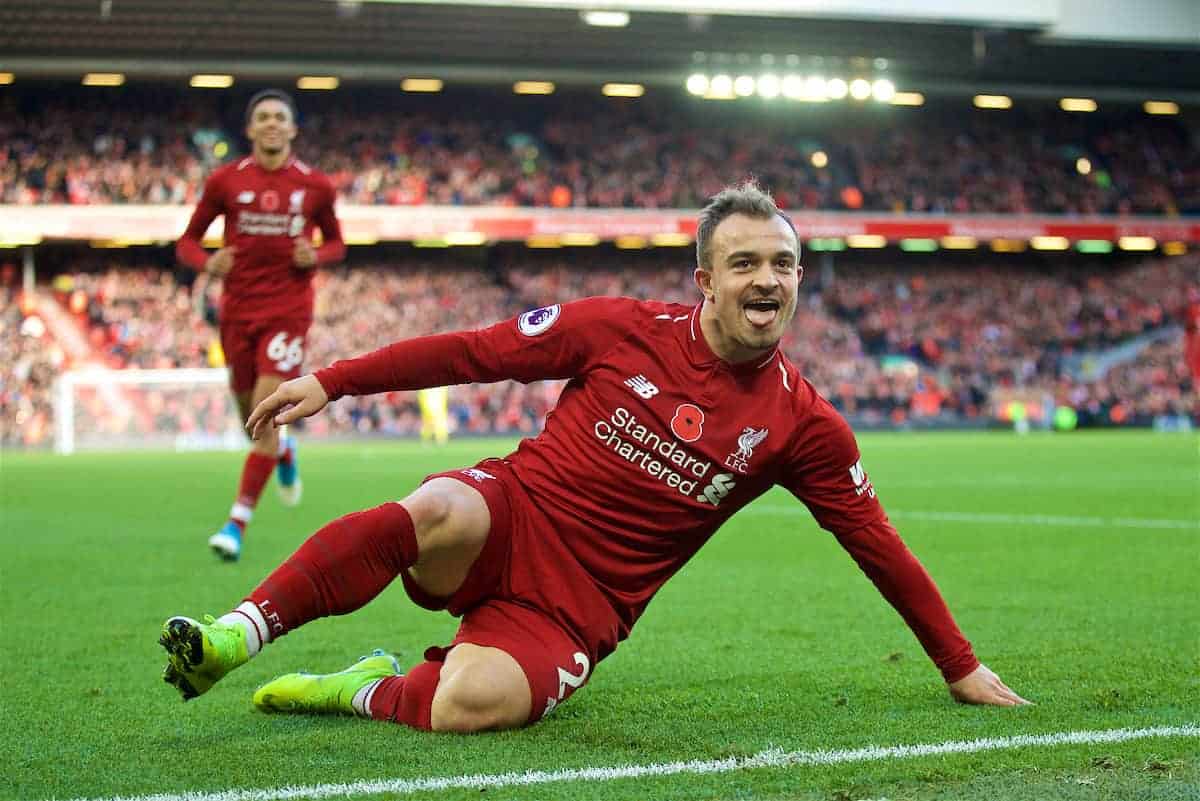 It was another routine win for Liverpool, but again not the most convincing or exciting performance.

A lightning-quick counter-attack saw Mohamed Salah open the scoring just 13 seconds after Fulham had a goal of their own disallowed.

Salah finished well for his eighth goal of the season, having been released down the right by Trent Alexander-Arnold.

The home side doubled the lead early in the second half, with Xherdan Shaqiri continuing to impress and delivering a controlled volley from Andy Robertson‘s cross to make the scoreline more comfortable.

The win moves Liverpool, at least temporarily, to the top of the table, but with both Chelsea and Man City in action later in the day it’s unlikely it will stay that way.

Next up is the international break, with Watford away in a fortnight.

Here’s how fans saw the game via social media on Sunday.

? Xherdan Shaqiri has either scored or assisted in five of his last six games for Liverpool in all competitions pic.twitter.com/5C3kdGnImV

“Shaqiri is such a little gem. He’s effortlessly made the step up from Stoke.” – Krimson on the forums.

“Another win, clean sheet and still firmly in the title race. Still not at our best but it’s a win, I think Shaqiri needs to be a regular starter now.” – Kieran David on Facebook.

“A professional but fairly unexciting performance. Disappointed it wasn’t 8-0 but I’ll settle for the three points.

Shaqiri MoM in my book, although Mo was almost back to his old self.” – legalalien on the forums.

Again, the actual performance itself wasn’t the most convincing

Pretty poor that half so that Salah goal is all the better. Van Dijk looks like he's still got his PJs on and sleep in his eyes. I'd be looking to bring Hendo on for Fabinho earlyish 2nd half or maybe bring Keita into one of the 3 attacking mid slots.

It wasn't easy – again – but #LFC keep the wins rolling in. This is now their best points haul (30), goal difference (+18) and goals against column (5) after 12 games of a Premier League season EVER.

Decent result. Still not quite clicking. The longer it goes the more you wonder if this is us for the year. If we keep winning we can't complain.

Job done in the end #LFC . Right, now c'mon Everton & United bloody do something this afternoon!

A positive was that both goals were assisted by full backs

Over a third of Liverpool's 19 officially assisted goals this season have been set up by full-backs (Robertson 5, Trent 2).

Robertson (6) has registered more assists than any other player for Liverpool in the PL and CL this season https://t.co/lwQLQvccwu pic.twitter.com/mdw60cA4uz

“Will take it, it’s weird though, 9-3-0 & there’s a bit of frustration/concern there about our performances, that first half we would’ve been punished by a decent team.

Robertson MOM quite easily.” – Red Ted on the forums.

I'd like to see Firmino back up top and Salah coming in from the right where he does most of his good work. Shaqiri looked bright. We are still making some silly decisions when we are in and around the box.

Job done. Much improved 2nd half, controlled the game far better and didn’t give Fulham any hope. Fabinho, Shaqiri & Salah all very good; Robertson my MOTM.

Really don’t understand this new system. Salah scored today cutting in from the right again. Firmino must be the 9 to be his effective best with the pressing. Bemused by Klopp in recent weeks. Yes the defence is better but the LFC “mojo” has gone. What’s next? Alisson up top??

Salah was good today imo. It's difficult to combine well when both Firmino & Mane were off, but Mo looked lively and sharp.