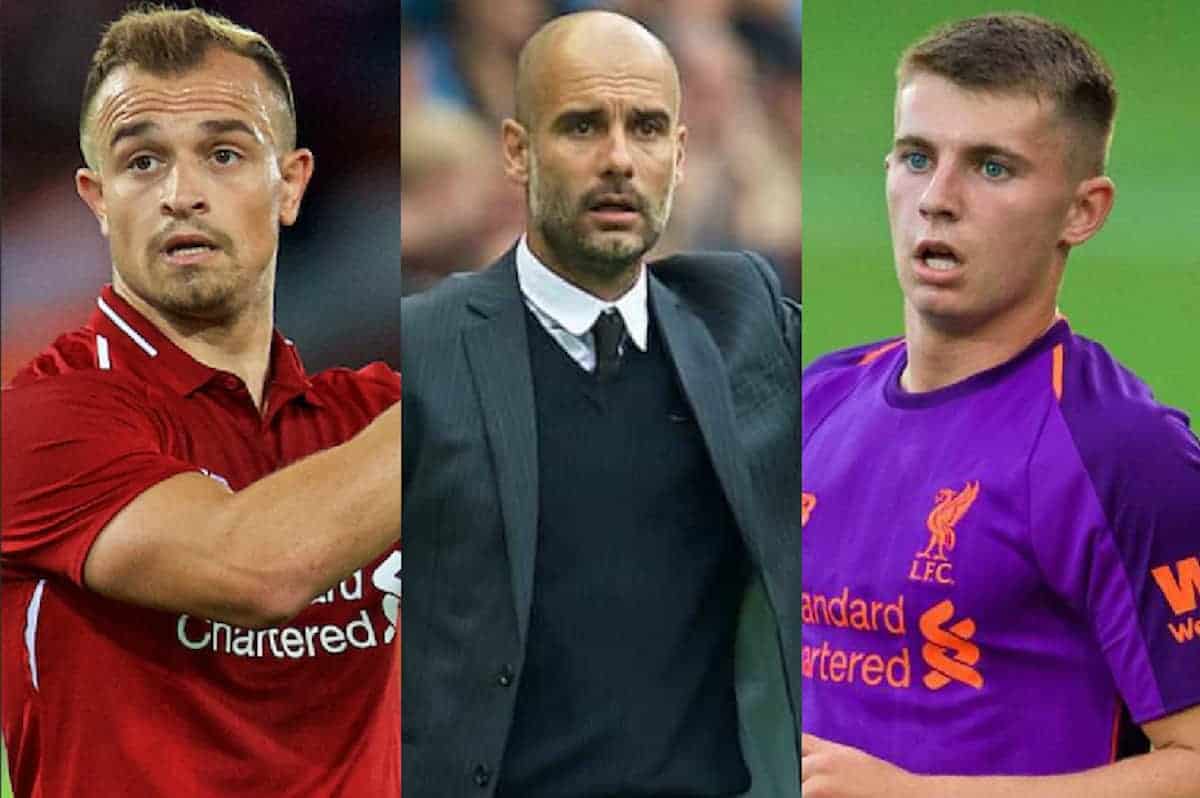 We round up the latest Liverpool news and transfer rumours on Monday, with the Reds preparing for Wednesday’s clash with PSG.

The Reds’ No. 23 has made a big impact on fans with his exciting play, clever assists and industrious work-rate off the bench this season.

Indeed, he has made something of a mockery of claims over the summer that he didn’t have what it takes to succeed at a big club.

Luckily for him, the Reds and Jurgen Klopp were fully prepared to take the gamble of signing him—and it could have been so much worse for Shaqiri had one fan gotten their way!

Speaking ahead of a big week where the Reds face PSG then Everton, the Swiss international has told the Echo of how he’s looking forward to it—and that he’d never have been on the opposite side of the divide.

“Then it’s my first derby so it’s going to be very special. I want to see and to feel the atmospheres in these derbies. I’m looking forward to it.

Pep Guardiola has clearly been rattled by Liverpool ever since Man City‘s Champions League exit at the hands of them last season.

His latest remarks are complimentary, in fairness, with the Spaniard comparing the two sides’ rivalry to three current tennis greats.

“They push one to be better than the other one because they know.

“We need it in sport, as athletes. They (the City players) know. I didn’t tell them, but they know how strong Liverpool are.

“They know that we can’t drop points because if we do Liverpool are going to win the league.”

It’s great that such a top manager—someone in charge of arguably Europe’s best side on current form—is so concerned about Liverpool, outlining the progress that has been made under Jurgen Klopp.

Ben Woodburn impressed in Liverpool U23s’ 1-0 win away to Everton U23s on Sunday, having temporarily returned from his loan spell at Sheffield United.

It was then reported that the 19-year-old is likely to come back to Anfield permanently in January, with his disappointing time at Bramall Lane coming to a premature end.

Blades boss Chris Wilder has hinted as much, but believes Woodburn has been a little unlucky because of the form of the team and individuals.

“It’s been talked about [his loan being terminated in January],” Wilder told the Sheffield Telegraph.

“The loan hasn’t gone as well as Ben and us would have liked, for various reasons – like the form of Mark Duffy, who’s probably playing the best football of his career, and the team as a whole.”

Woodburn has only managed 10 minutes of first-team action since mid-September, with United pushing hard for promotion from the Championship.

Despite rumours claiming they may miss out through injury, Neymar and Kylian Mbappe look likely to be fit for PSG’s meeting with Liverpool.

Neither played in the weekend win over Toulouse in Ligue 1, a 14th successive domestic league victory.

Boss Thomas Tuchel has confirmed they are likely to return, telling reporters:

“I am more optimistic than yesterday about Ney and Kylian.

“They will be able to train on Monday.”

They were always going to play, let’s face it—over to you, Trent and Robbo!

Liverpool kept yet another clean-sheet at Watford, meaning they have now conceded the fewest goals (five) after 13 league games in their history.

In his column for the Liverpool Echo, analyst Andrew Beasley also points out that the Reds haven’t conceded more than two goals in a Premier League game for 16 outings.

That dates back to the 2-2 draw at West Brom in April, making it their longest-ever run without seeing their goal breached twice.

The defensive strides made by this team in 2018 have been quite remarkable.

Turkish side Galatasaray were in the rumour columns last week over a prospective January move for Reds’ reserve striker Divock Origi.

Now it seems they won’t be satisfied with just one recruit from Anfield, with rumours surfacing that they also want Dominic Solanke.

Calciomercato are suggesting the Super Lig side are interested in a double swoop; whether or not they’ll be successful, it certainly appears there is interest in both forwards for a winter switch.

Wolves have been regularly mentioned as suitors for Origi, while a loan to Steven Gerrard’s Rangers is a possibility for Solanke.

Pulisic Still On The Summer Agenda

Rumours have been ongoing for more than a year regarding Liverpool’s potential interest in Borussia Dortmund’s Christian Pulisic.

BVB have continually said they’re not willing to sell—but that could change in the summer.

Pulisic will only have a year left on his contract come the end of this season and the Bundesliga leaders will be ready to negotiate his transfer, reports Matt Law of the Telegraph.

Dortmund remain unwilling to do business in January, but the Reds and Chelsea will be battling it out over a £70 million switch ahead of next season, if the reports are accurate.