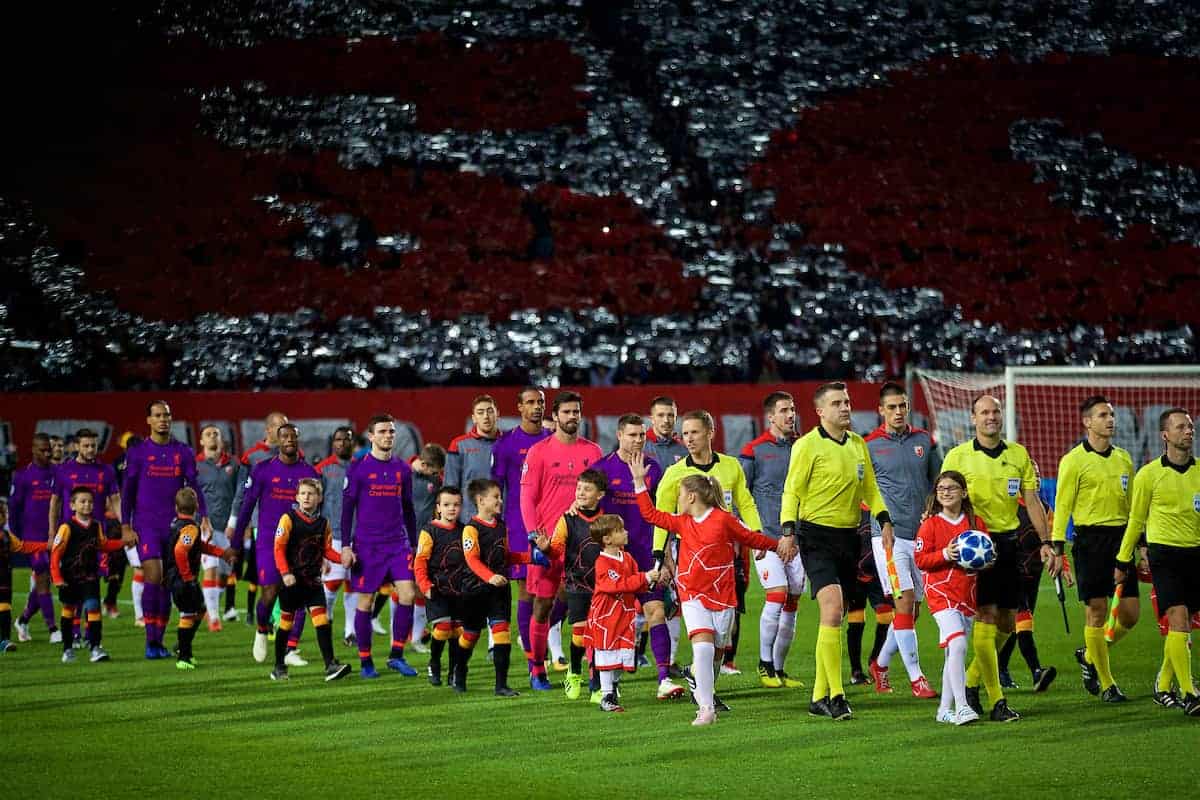 Liverpool may have lost to Red Star, but those who travelled to Belgrade were in high spirits throughout, taking in and contributing to one of the best atmospheres football has to offer.

Belgrade isn’t the easiest place to get to, but it’s well worth passing through a couple of airports or other cities in order to experience it.

Liverpool fans arrived in numbers; not considerable numbers, but enough for them to regularly be spotted around the place in the buildup to the game.

They wandered around the city throughout the day, much to the delight of the Red Star club shops which were packed full of travelling fans. 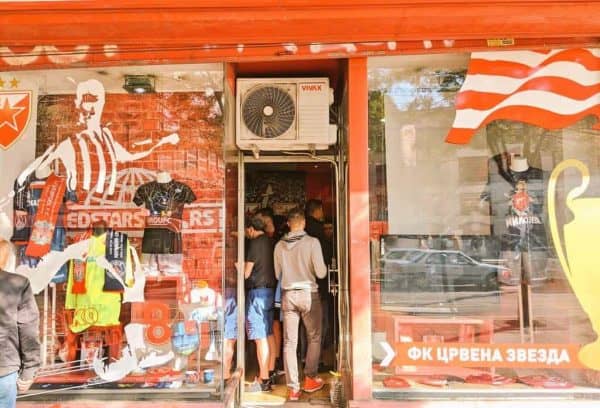 At the airport there were as many Red Star fans as there were Liverpool followers, if not more, with supporters travelling from all corners of the country to see their adopted team, as many fans do back in England.

When their manager, Vladan Milojevic, commented after the game that this was a victory for the entire nation, he wasn’t wrong. Only fans of Belgrade’s other club, FK Partizan would disagree.

The Partizan Stadium is just a short walk away from Red Star’s Rajko Mitic home.

While they’re not as close as Goodison Park and Anfield, on the grander scale of Eastern Europe they are about as close as you can get. But their derby certainly isn’t friendly.

The two teams emerged from post-war communist organisations as the new government looked to create new identities in the country, and this included new football clubs.

Red Star are a loose continuation of SK Yugoslavia and were originally formed by the Anti-Fascist Youth League.

Modern-day Serbia is carving an identity of its own, and the club has become a symbol of Serbian pride. 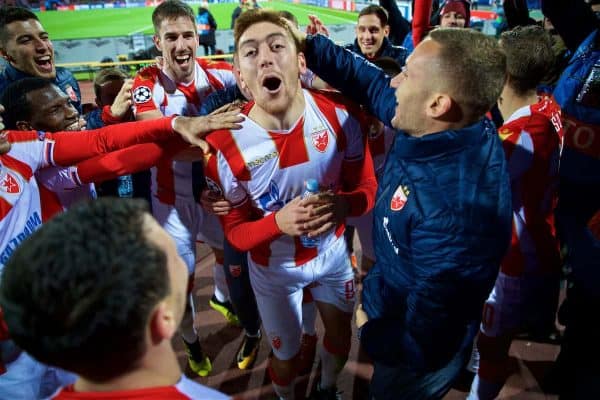 Nebojsa Markovic, writing for In Bed With Maradona, says: “In many examples of street and school name changes, we see shifts from figures and dates strictly related to Yugoslavia into more ‘pro-Serbian’ names.”

It’s another reason why Tuesday’s victory will have gone down well across the land, and beyond.

Both stadiums offer good views of the city, and those who choose to take the hour-ish walk from the city centre will be rewarded with different perspectives of the area, and the two stadiums.

Another good view can be found at the northern end of the city.

The Belgrade Fortress offers a panorama of the area, and sights from there include the ancient town of Zemun which has now been encroached upon by the sprawl of new Belgrade.

The point where the Sava flows into the Danube can also be seen if you like rivers and that, and the confluence of the two waterways forms the uninhabited, at least by humans, Great War Island. 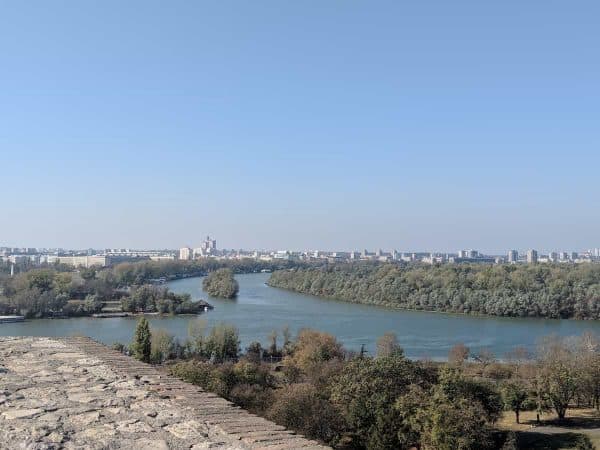 Before this turns into a travel blog…back to the football.

The atmosphere in the Marakana, as the Rajko Mitic Stadium is also known, was intense from start to finish.

Liverpool happen to be in a group with two sides which have the best atmospheres in Europe, and they’ve now lost at the home of both.

The stadium was packed, and the crowd produced a display which turned the 50-odd thousand people into a single entity, which is rare for a modern-day stadium and even eclipsed Napoli’s showing. 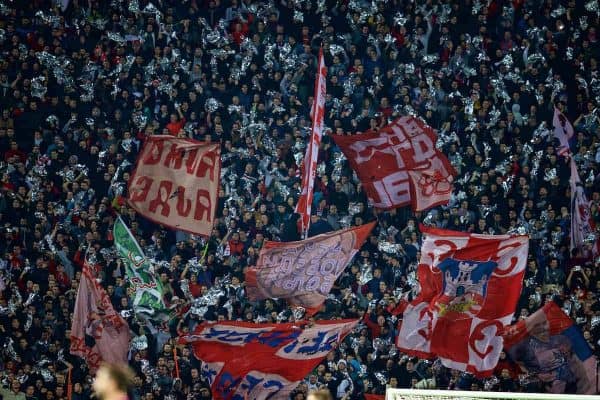 The Liverpool contingent were heavily outnumbered, and that they could be heard at all is credit to them.

Despite all the praise for their atmosphere on European nights, Red Star’s attendances for league games is nowhere near the numbers they get for these continental ties.

This could be due to the fans arriving from across the country, as mentioned earlier, as these people are likely to stay away for some of the less important league fixtures.

The Red Star players embarked on a slow lap of the pitch along the running track area which surrounds it, and they received a ripple of applause from the Liverpool fans as they passed the away end.

A large section of the home fans remained in the ground long after the final whistle, while the Liverpool fans also had to wait a while before leaving the stadium as is often the case for away crowds in Europe.

This led to a period of back and forth between the two sets of fans as the Red Star contingent continued to go through their repertoire.

They took a break as the gathering of Liverpool fans sang You’ll Never Walk Alone and Allez, Allez, Allez from the other side of the stadium, and the Red Star fans applauded them at the end.

Despite the f*** you chants, Red Star applauded Liverpool fans. Great respect from the Serbs pic.twitter.com/lNOHPYasDv

The noise from the terraces could be heard in the media room as Klopp conducted his post-match press conference, and the Liverpool manager commented on the atmosphere:

“It was a good football atmosphere. I don’t think it would have been impossible to perform, to be honest.

“It was not that we had to be afraid or whatever, it was a football atmosphere. Whatever they sang, we don’t understand. It was only loud.

“The atmosphere, singing-wise and noise-wise or whatever, was not a problem. But the atmosphere after the second goal especially, in the whole club, if you want, they could now smell it.

“At half-time we walked a long way to the dressing room and they were all in a very positive mood. We were actually the other way around.”

The players will have done well to not let it affect them, and it’s more than likely that it did, despite what Klopp says.

Liverpool will be glad they don’t have to play there again this season, but their fans won’t be disappointed if they’re drawn against Red Star in future campaigns.