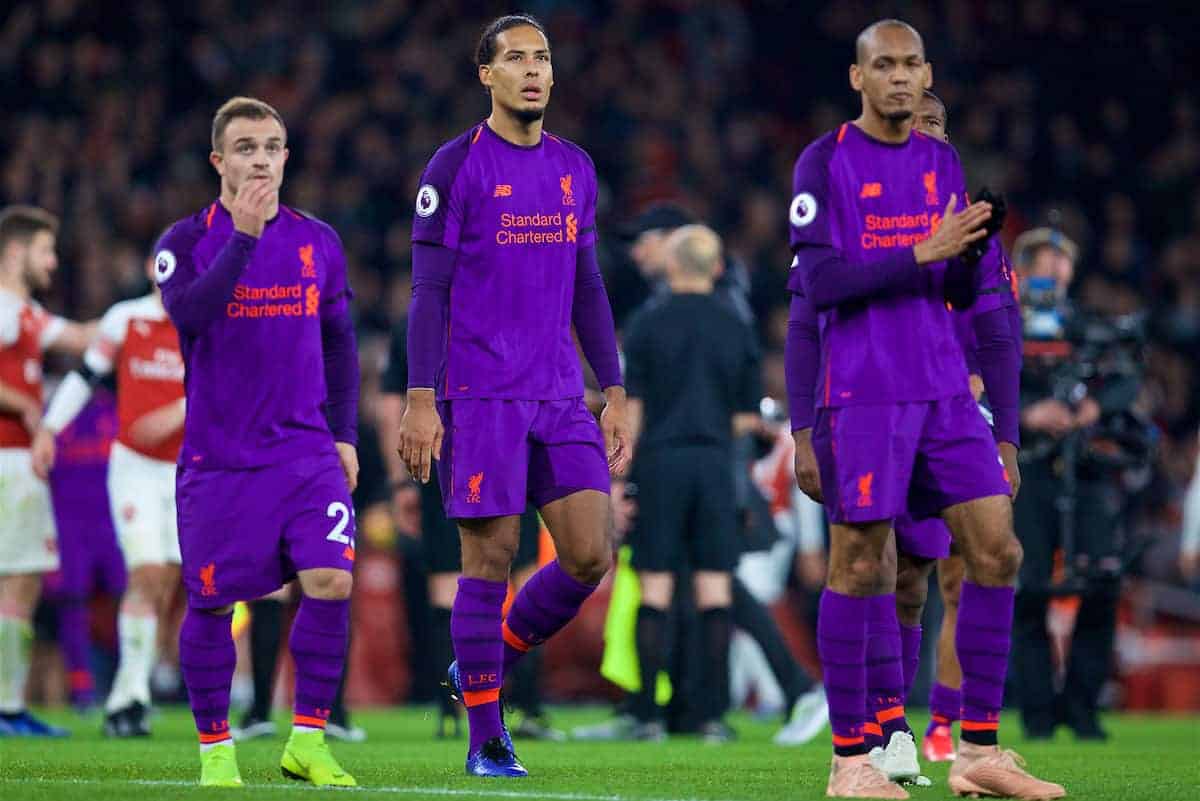 Liverpool dropped two points on the road in a frantic 1-1 draw with Arsenal, and supporters had mixed views on the result and individual performances.

It was a frustrating evening for Liverpool in north London as a high-tempo 90 minutes ensured the game hung in the balance for the entirety, before the spoils were shared.

The Reds hit the lead through James Milner in the second half, only for Alexandre Lacazette to capitalise on a momentary defensive lapse late on to leave Liverpool ruing a number of missed opportunities.

It inevitably meant Jurgen Klopp’s men dropped two points on the road, but after 11 games the Reds remain unbeaten atop of the Premier League table—with Man City yet to play.

Fabinho came under fire after struggling to make a positive impact, which saw the skipper’s absence duly noted…

“Thought Fabinho was our worst player today. He seemed to find the pace of the game difficult to keep up with, putting more pressure on our mids and defence.”

– RedSeven on the forums.

If Jordan Henderson played like Fabinho did there, there’d be a million think pieces being written as you read this.

Fabinho struggled with pace of that one. If you don’t see Henderson is better fit in LFC midfield right now in these type of games I don’t know what to tell you

Looked badly out his depth Fabinho, slow in and out of possession and poor on the ball.

Van Dijk led the pack, but concern continues to surround the form of Alexander-Arnold…

Big Virgil the best player on the park there. Immense.

Should have had a hat trick though ?

Good game. Probably honours even. MOM Van Dijk
Probably as close to an individual 10/10 performance as you can get.
Gomez, Robbo also very good. #lfc

One thing for sure is Virgil van Dijk is by far the best CB in the world.

And his partnership with Joe Gomez is the best in the premier league. ??

Virgil Van Dijk is one of the reasons Liverpool hardly concedes. Man is a rock!!!

“Arnold was awful today cost us nearly every time down the left… And if he didn’t stop and waving his arms in the air he could have stopped their goal.”

If Moreno had a performance like Trent today fans would be calling for his head. Been singled out by Arsenal on almost every attack this second half

Fans were disappointed to concede late on, but perspective on the bigger picture was maintained…

Top of the league.
Highest ever it’s total after 11 games
We have already played Ars, Che, spurs away

It’s ok to be happy

“A fair result tbh I’m actually happy with point it’s good point if u wanna win the league u have to pick up ugly point or points at tough places like this I’m glad we didn’t lose we didn’t play well tbh but I’m happy with a point.”

If we weren’t up against the best team in PL history for the title, then it’s a decent point against a very good side away from home. Feels like a wasted opportunity.

Never nice to concede late on but a point at Arsenal is by no means a bad result – they look a totally different prospect under Unai Emery. This is now #LFC's best ever start to a Premier League season, by the way.

“Still unbeaten, the point of not losing to other top teams isn’t just to get a point, but to not give them +3 in the table. Beat Spurs away from home, Didn’t lose to City (the best team in the league) and didn’t lose to Arsenal or Chelsea away from home. Not complaining.”

God, we're unbeaten in the league this season and I feel like we're mid table. The stress is killing me. Just 7 more months of this to go…