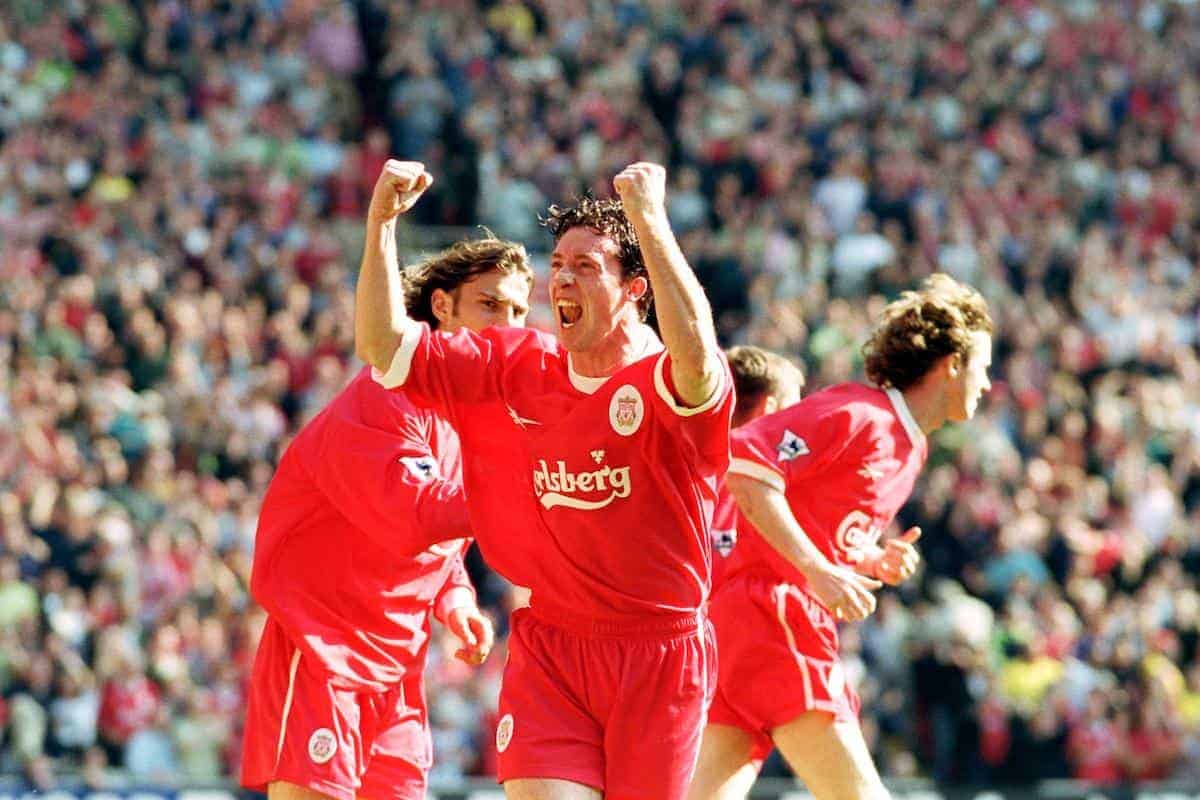 Liverpool host Everton in the 232nd Merseyside derby on Sunday. It will be Marco Silva’s first experience of the rivalry, with Everton bidding to end a winless run dating back 18 matches to October 2010.

A match memorable as much for the on-field antics of Robbie Fowler as the game itself.

Olivier Dacourt stunned Anfield with a goal after just 41 seconds but Fowler restored parity with a 15th-minute penalty.

However, his controversial celebration – pretending to sniff the byline in front of the away end in response to taunts – provoked a hostile response from visiting fans and ultimately landed the striker with a four-match ban.

Fowler added a second shortly afterwards and Patrik Berger’s 20-yard volley made it 3-1 with eight minutes to go but Francis Jeffers’ strike set up a frantic finish.

John Aldridge’s early opener was cancelled out by Stuart McCall in stoppage time, with the Toffees midfielder levelling again when Ian Rush came off the bench to score in extra-time. However, the Reds striker was not to be denied and hit the winner.

One of the most dramatic derbies of all time was an FA Cup fifth-round replay at Goodison Park. The first match had been goalless but the second could not have been more different.

Three times Liverpool took the lead in normal time, twice through Peter Beardsley and once through Rush, but two from Graeme Sharp and one from Tony Cottee saw the hosts equalise each time.

John Barnes put Liverpool ahead again in extra-time but once more Cottee levelled.

It was to prove Kenny Dalglish’s final match in his first spell as manager, the Scot telling the club of his intention to leave the following day. Everton won the second replay 1-0.

A match memorable for its second-half fireworks with all five goals scored in the final 34 minutes. The visitors went ahead through Alan Whittle barely 10 minutes after the interval and, when Joe Royle doubled their lead just past thehour, it seemed the points were heading back across Stanley Park.

However, Steve Heighway crucially pulled one back just six minutes after Everton’s second. The winger then crossed for John Toshack, signed from Cardiff 10 days previously, to head home his first goal for the club with Chris Lawler completing the turnaround six minutes from the end.

The best recent match between the sides was a humdinger at Goodison Park five years ago.

There was drama from the off as Philippe Coutinho’s opener was cancelled out inside 10 minutes by Kevin Mirallas.

Luis Suarez restored Liverpool’s lead and that was the way it stayed until Romelu Lukaku equalised 18 minutes from time. The home fans were delirious when the Belgian put Everton ahead 10 minutes later but substitute Daniel Sturridge earned Liverpool a point with an 89th-minute header.

The highest-scoring Merseyside derby in its long history. Harold Barton scored a hat-trick as the Reds ran riot, with Alf Hanson, Tom Morrison, Harrold Taylor and Syd Roberts also on target for Liverpool.