Jurgen Klopp has made three changes to his starting lineup for Liverpool’s crucial Champions League group stage decider at home to Napoli tonight.

The Reds will likely require victory to progress to the last 16 of Europe’s top-tier tournament, with a 1-0 win over Carlo Ancelotti’s side enough to guarantee second place.

But with the visit of Man United to come on Sunday, and this game coming just three days after a trip to Bournemouth in the Premier League, Klopp has been forced to consider rotation.

This is reflected in his XI at Anfield this evening, though the manager is clearly going all out for the three points.

Alisson keeps his place in goal, with a clean sheet at Dean Court at the weekend ensuring he has the best record of any goalkeeper in Europe’s top five leagues—though he has kept only one in five games in the Champions League.

Ahead of the Brazilian are Trent Alexander-Arnold, Joel Matip, Virgil van Dijk and Andy Robertson, as the left-back makes his 50th appearance for Liverpool.

In midfield are Jordan Henderson, Gini Wijnaldum and James Milner, with Klopp expected to field a 4-3-3 formation.

And looking to keep up their excellent form up front are Mohamed Salah, Sadio Mane and Roberto Firmino, and after a hat-trick on Saturday, Salah will be full of confidence tonight. 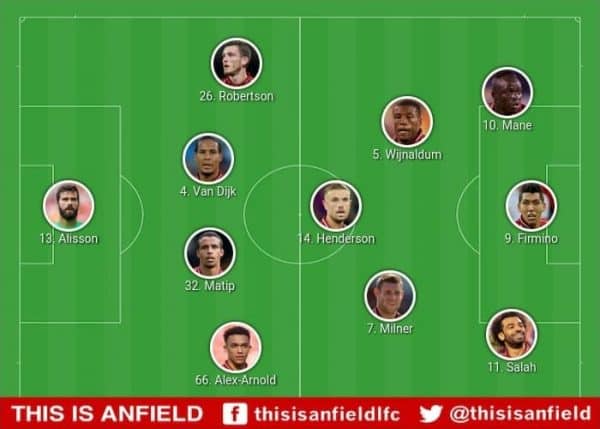