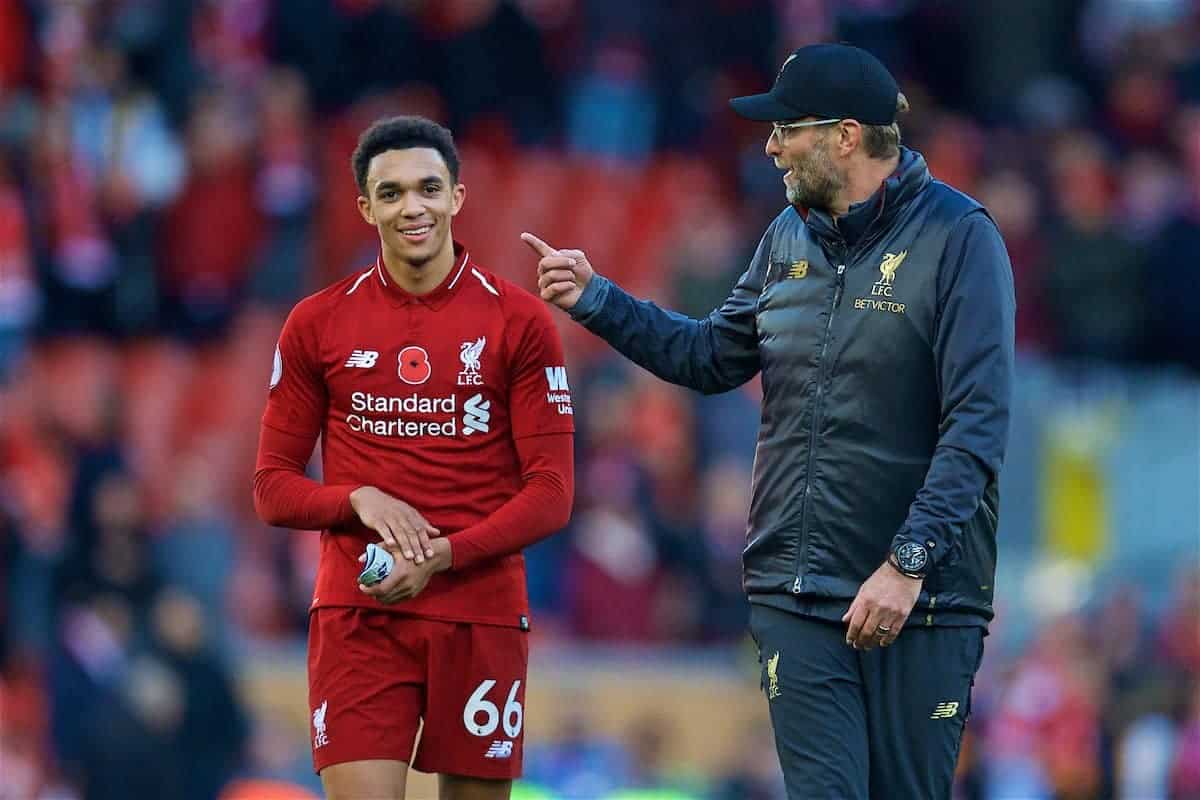 Jurgen Klopp has provided an update on Trent Alexander-Arnold‘s foot injury, declaring his progress to be “surprisingly good” during a busy run for Liverpool.

Alexander-Arnold was forced off late into the Reds’ 1-0 win over Napoli in the Champions League, joining Joel Matip and Joe Gomez on the defensive absentee list.

But while both centre-backs require a lengthier layoff, the 20-year-old’s problem is being assessed day by day, which is a boost for Klopp as he guides his side through a congested winter.

Nathaniel Clyne performed excellently in his stead in Sunday’s 3-1 win over Man United, and both James Milner and Rafa Camacho are available as alternatives, but the ideal scenario will be Alexander-Arnold returning.

Fortunately, he is in better shape than initially expected, and though Klopp has ruled him out of Friday night’s trip to Wolves, he told reporters on Tuesday that “it looks really good for Trent.”

“It looks, actually, surprisingly good,” he explained in his pre-match press conference.

“Wolves will still be a bit too early, but after that obviously we can think about him. But for that he needs to train, and so far he didn’t train.

“The pain goes down, second by second, which is good.

A clear positive of Sunday’s victory, bar the performance and the result, was the avoidance of any further injuries—and particularly for Clyne, who played the full 90 minutes in his first Premier League appearance of the season.

While the early nature of Tuesday’s press conference ensured Klopp could not give a definitive assessment of his squad’s fitness, he was positive no new issues have arisen.

“Not that I know [of],” he responded when questioned on the health of his squad.

“But I have to be careful because last time I said about Joel Matip I didn’t know about it! Everything should be fine.”

The manager is likely to make changes for the 8pm kickoff at Molineux, though his back four can be expected to be very similar to that which lined up against United.

After Wolves, Liverpool take on Newcastle (Boxing Day), Arsenal (Dec 29) and Man City (Jan 3) in the league, before returning to the Wolverhampton to take on Nuno Espirito Santo’s side in the FA Cup third round.