Jurgen Klopp has made an “outstanding” contribution to the Premier League and made Liverpool “a great team to watch”, according to Brighton boss Chris Hughton.

Klopp’s table-topping Reds are threatening to end the club’s 19-year wait for the English title.

The Merseyside club face Albion at the Amex Stadium on Saturday with a four-point lead on second-placed Manchester City, the reigning champions.

German Klopp replaced Brendan Rodgers at Anfield in October 2015, and Hughton has been hugely impressed with his work.

“I think he’s been outstanding for the game here,” said Hughton.

“When you see how their team work without the ball to get it back and the quality they show, it’s orchestrated by the manager and the demands of the manager.

“This season shows what a great job that he has done.

“They are better prepared than any other team with the quality they have got. It is all led by Jurgen Klopp and they are a great team to watch.”

Liverpool remained unbeaten for 20 league games this term before a 2-1 defeat to title rivals City on January 3.

That setback was followed by Monday’s FA Cup third-round loss at Wolves, which was compounded by losing Dejan Lovren to an early injury.

With Lovren and Joe Gomez out and Joel Matip only just having returned to training, Virgil Van Dijk is the Reds’ only fully-fit senior centre-back.

Brazil midfielder Fabinho filled in as part of a makeshift backline against Wolves, while 16-year-old Dutchman Ki-Jana Hoever came off the bench for his debut.

Hughton, however, dismissed talk of a defensive crisis for Albion’s opponents and says the absences will not make them weaker.

“I don’t think it does because of the quality they have got,” he said.

“As with every club, you have your recognised players in that position and those that you see as your first choices and second choices generally.

“With the game they play, they are very much a possession-based team, great counter-attacking strength and pace, and they would probably see themselves as having the bulk of possession.

“They have manoeuvred players from one position into another and have done an equally good job.” 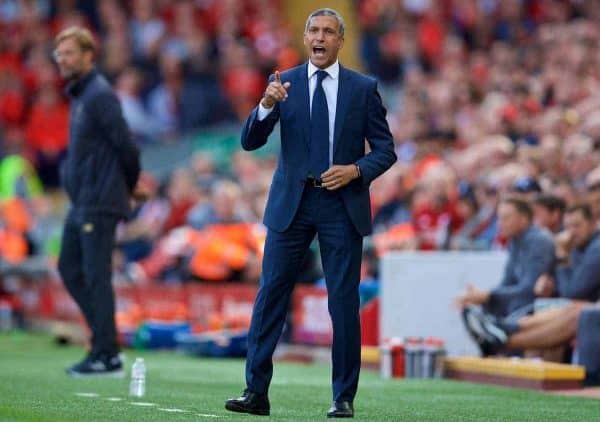 Since winning promotion from the Sky Bet Championship in 2017, the Seagulls have recorded two shock victories against Manchester United and also defeated Arsenal.

Asked if the fixture was a step up to the games against United and last season’s win over the Gunners, Hughton: “Yes it is.

“You are looking at the best teams and at this moment, Liverpool are the best team in this league and their league position says that.

“It’s a great challenge but anything we can get would show how we have come over this period of time.”

The Seagulls will be without Bernardo (hamstring) and winger Jose Izquierdo (knee), while goalkeeper Mat Ryan and winger Alireza Jahanbakhsh are on international duty at the Asian Cup.